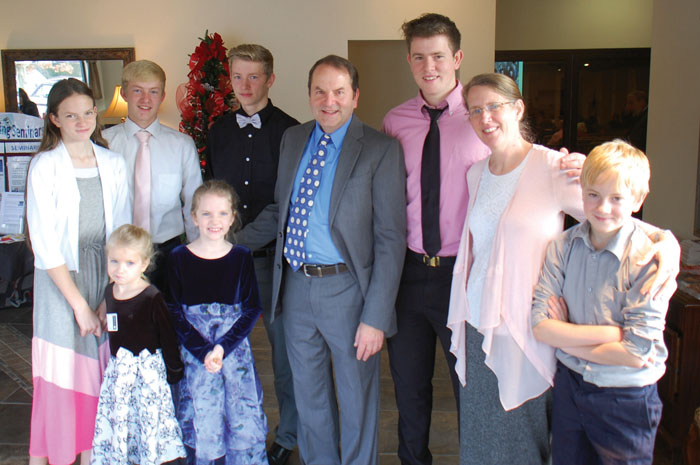 Mark Wineka/Salisbury Post Rick Grubbs, center, and his wife, Carrie, second from right, with seven of their 12 children, including Precious, Jewel, Christian, Jubilee, Caleb, Royal and Paul. Rick Grubbs, president of Life Changing Seminars, gave one of his time management talks from a Biblical perspective at Trading Ford Baptist Church Sunday. Carrie and the children also sang. The family lives in Salisbury.

SPENCER — In Acts 24, verses 24 and 25, there’s a prime Biblical example of procrastination.

Felix, a ruler, hears the Gospel as spoken by Paul, but as he listens he trembles with fear and tells Paul that when the time is more convenient, he’ll ask him to come back.

More precisely, the passage says, “And as he reasoned of righteousness, temperance, and judgment to come, Felix trembled, and answered, “Go your way for this time; when I have a convenient season, I will call for you.”

A Salisbury resident since 1998, Grubbs is president and founder of Life Changing Seminars and host for “Redeeming the Time” radio segments heard on many religious-based stations across the country, including twice daily on American Family Radio affiliates.

The focus of Grubbs’ ministry — his radio messages, talks, workshops, books, CDs and other resources — is time management, especially as it relates to how valuable and precious a person’s time is in relation to eternity.

Don’t waste it and stop putting things off.

A native of Walkertown, Grubbs has a bachelor’s degree from Appalachian State University and a master’s degree from Liberty University. A former public school teacher and prison chaplain for the Florida Department of Corrections, Grubbs has given more than 1,500 seminars in 49 states and 25 countries.

If any couple need to know about time management, they are Grubbs and his wife, Carrie. They have 12 children. Carrie and the seven youngest children accompanied Grubbs to his Sunday appearance at Trading Ford Baptist.

Rick Grubbs said the family had a special Christmas because all 12 children (and some of the grown children’s spouses and offspring) were able to visit Salisbury for the holiday.

“Our opening of presents lasted about two hours,” he said, describing it as “a little complicated.”

With Carrie on the keyboards, the children performed a song together Sunday at Trading Ford. Christian Grubbs also played a song on the accordion before his father wasted no time in getting to the topic of procrastination — one fitting for the new year.

Procrastination, in terms of one’s life and time, becomes “the great thief” and the “great serial killer of what God wants us to be,” Grubbs said.

“Life is what is passing you by while you’re waiting for life to begin,” he added.

Grubbs used humor, anecdotes, history and parables to talk about how procrastination happens, the things done to help it along and the weapons people can use to fight it.

“The devil is the force behind our procrastination,” Grubbs said, giving examples of how distractions allow people to think they have more time and keep them from thinking about the most important things in life, especially salvation.

According to Grubbs, procrastination takes place through slothfulness (laziness) and fearfulness, and each has its rationalization techniques.

Through laziness, people use short-term thinking to ignore long-term consequences. Grubbs said they think they can keep putting things off a little longer, and they don’t see the accumulating consequences.

The three weapons to use against slothful procrastination are learning the power of deadlines, commitment and accountability.

On deadlines, Grubbs said he often used to tell himself he was going to read the Bible cover to cover. But the best way he found to accomplish that goal finally was to find a Bible check-off calendar and give himself a daily deadline of exactly what to read.

Commitment means finding a sense of ownership that comes with a deadline to yourself, someone else or God, Grubbs said. “When the commitment is there,” he added, “the freedom is going to follow.”

As for accountability, “we always do better if we know someone’s going to be checking up on us,” he said.

Grubbs said he always found it hard to get himself up and moving in the morning until he joined a 5 a.m. prayer group in Florida and persuaded the group to allow him to unlock the church for everyone else.

“That consistently got me up on time,” he said, because he was accountable to others.

In terms of fearful procrastination, people often use perfection as their rationalization. If they can’t do something perfectly, they decide they can’t do it at all.

Another technique they employ out of fear is substituting activity as a way to avoid accomplishing something else.

“If the devil can’t make you bad, he’ll make you busy,” Grubbs said.

The best weapon against fearful procrastination is getting over the fear of failure, according to Grubbs. People must see failure as necessary for success. In a parable, Jesus spoke about the need for a season of death before a season of birth could follow.

Grubbs used the more modern examples of inventor Thomas Edison and baseball great Ty Cobb in describing how they did not allow failure to keep them from succeeding.

When Edison was inventing the light bulb, he probably failed 5,000 times before making it work, but he viewed it as 5,000 successes in eliminating what he didn’t want.

Likewise, Cobb is seen as one of the greatest base stealers in baseball history, but his success rate one year was only 61 percent, when he stole 94 bases in 154 attempts.

Grubbs reminded his audience that when they try to share the Gospel with people, they often get many “no”s before they hear a single “yes.”

Another weapon against procrastination caused by fear is learning to create momentum, Grubbs said. At first, do what you can do.

Grubbs left his audience with what he called a bottom-line tactic for confronting one’s procrastination as a Christian. He said they should ask this every time they are tempted to procrastinate in 2019:

He said there can be no third option.