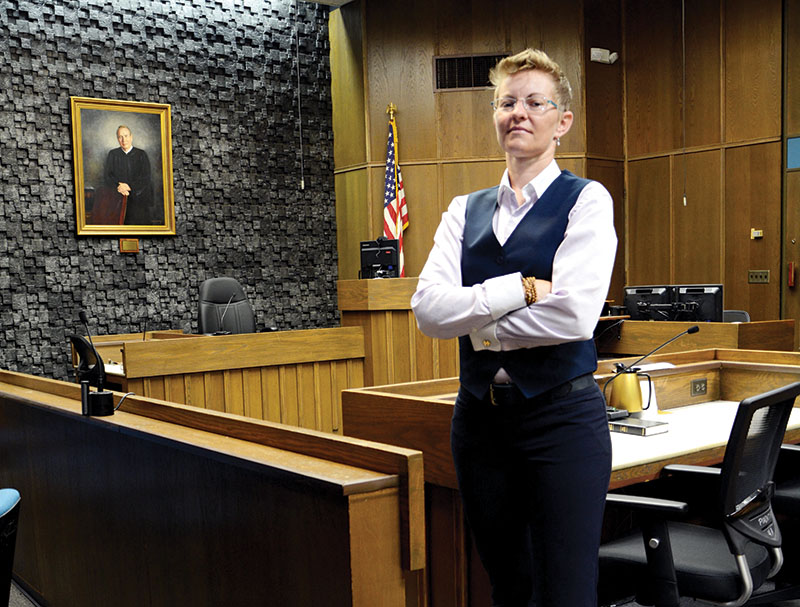 Kerri Sigler could no longer avoid the opioid epidemic problem. Approximately every client that would come across her desk was struggling with addiction. She vociferously threw her hands up in the air and decided to do something.

Rewind to when Kerri was a child in Bethlehem, Pennsylvania. Kerri remembers being three or four and telling people she wanted to be a lawyer when she grew up. “I can remember being four and having “Time Magazine” laid out in front of me. I knew it was what I wanted to do,” Kerri recalls. From a young age, Kerri saw how hard her single mom worked. Kerri and her brother had to be very independent as a result. An education was important. But when Kerri got into Miami University, her mom realized it was too expensive to afford. Therefore, Kerri went to her backup school, Elon University. “We got down there and the first thing I saw was cows and a Tractor Supply store and being from the north, I thought, ‘What have I done?’ But I absolutely loved it. It was exactly where I needed to be. It is still my home base and I love going back.”

At Elon, Kerri double majored in political science and theatre. She minored in nonviolent studies and graduated with honors. By 2003, she was working at the Virginia Stage Company and a friend from Mexico was diagnosed with a degenerative eye disease. She could not be operated on in Mexico or she would go blind. The surgery was too expensive to afford in the United States. “I started writing top ophthalmologists in the United States. She got the surgery and did not go blind. It was at that moment when I thought, ‘This is why I want to be a lawyer. To help people.’”

At that point, Kerri went back to Elon. Elon had opened up its first year of law school and Kerri was in the new class. The only problem was that when Kerri graduated in 2009, the economy was trying to recover from a recession. So getting a job was nearly impossible. Therefore, the day she took the bar and finished nearly four hours early, Kerri went home to check her email. She saw an internship open for a Ward Black Law in Greensboro. Kerri applied and started the next day.

“Janet Ward Black eventually gave me a temporary gig and let me rent office space for free until I could pay rent while starting my own law firm. I worked for her during the day and my firm at night.” At that time, there were a lot of people who needed representation who were denied unemployment benefits. The cases did not make a lot of money but it paid Kerri’s bills. Plus, she got the priceless education of starting her own firm under the guidance of a great mentor.

Eventually Kerri partnered with John Wait. “I was trying to do civil litigation but it is super tough. So I went to the public defender’s office and became a criminal defense lawyer. I remember my first client being guilty as sin and not knowing what to say.” As a public defender, the caseloads are heavy, around 20 to 25 a day. Kerri also began to notice the majority of her clients were on drugs. “I realized I was representing heroin addicts. Most middle class. Most young. Most had been prescribed a pain killer like Percocet or Oxycodone for smaller injuries like a broken toe or aching toothache. And those pain pills are super addictive. When those run out, the substitute is heroin,” Kerri states indignantly.

During this time period when Kerri began to notice the dark side of the world, a new light was about to shine in her life. Kerri was about to adopt a three-and-a-half-year-old boy, Jonas. “Ten years prior, I had a dream that I gave birth to a baby but he wasn’t a baby. I held this boy over my head and he had dark eyes and dark hair. In the dream, I said I will name him Emmanuel. I realized when I got Jonas he was the boy in my dream, so his name is Jonas Emmanuel.” Kerri was 35 and single. The boy came with post traumatic syndrome (PTSD) and as Kerri would come to find out, he is severely autistic. He is also non-verbal.

Because of the severe PTSD, Jonas would wake up in the middle of the night screaming for hours. His body would go rigid and his eyes would disassociate. Kerri says, “He brought out an innate patience I didn’t know I had. I would just hold him. He brought an inner peace and calm I never knew I had,” admits Kerri. “He is so happy now. He is my most favorite being in the universe.”

As a loving mother, Kerri realized the drug problem was rampant like the flu is during the winter. Kerri wanted to remedy the addiction. There was a successful drug court that ran from 2005-2011. But the court was pulled when they stopped receiving funding. Kerri was told she would never get the funding. “I asked a judge to give me the names of who I needed to call to restart the drug treatment court. I wanted to privately fund it so we wouldn’t be at the mercy of government funding. Then, I started making calls.”

In March of 2017, Kerri officially launched her own nonprofit, Phoenix Rising, to combat the drug epidemic. She formed a partnership with Councilman James Taylor to get funding. Within the first 27 days, Phoenix Rising raised money for drug court for the first year. It took six months to get a judge on board. That summer, she also decided to restart her own law firm. Finally, by Dec. 1 of 2017, the restart of drug court was officially launched. Once drug court treatment started, Kerri served as the pro bono defense attorney for that court and ran her own practice all at the same time.

The following year, Kerri began to also save furry friends. “I already had three dogs but there was this emaciated dog at Stokes County Animal Shelter. His name was Bernie. If he didn’t get rescued, he was going to be euthanized. He had such a bad ear infection, he could hardly lift his head off of the floor.” Kerri has now fostered over 15 dogs. A friend of Kerri’s calls the lawyer an angel. “The mantra I go by is a quote by John Wesley. He said, ‘Do all the good you can by all the means you can in all the ways you can in all the places you can in all the times you can to all the people you can as long as ever you can.’” Kerri adds, “I find if you do all the good that you can, it will fill all the holes in your soul. If I died tomorrow, I would have no regrets.”

Most in Kerri’s position ignored the drug epidemic. Many had passed over Jonas. Numerous had ignored the dogs that needed to be saved and loved. But not Kerri. Through our neighbor’s pious virtues, she fought to make our world better and continues to do so.