After the Final Bell: West Forsyth teen excels in class and in after-school activities 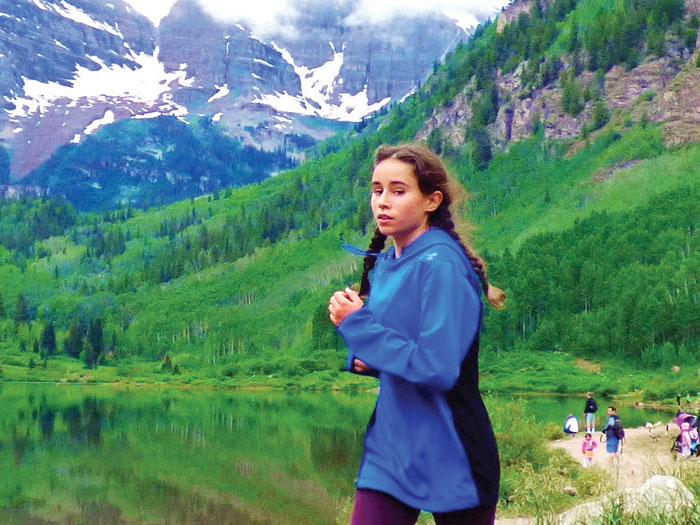 Jasmine Marshall competes in cross-country and track at West Forsyth, and also enjoys running while on family vacations.

Many high school students have the designation of student-athlete. Jasmine Marshall, a junior at West Forsyth, is a student-athlete-musician. A bundle of energy, she is constantly in motion and moving from one activity to the next one.

Jasmine’s ambitious academic schedule includes five Advanced Placement classes at both West and at the Career Center. This schedule, along with her excellent grades, has her currently ranked in the top 10 in her class. Her mother Connie remarked about Jasmine’s humility despite her daughter’s successes in the classroom. “She will say things like, ‘I am not that smart,’ but she has never made a B in her life,” Connie said.

As an athlete, Jasmine has competed in cross-country and indoor and outdoor track. While she enjoys the competitive nature of the sports, running is also something that she enjoys, and it is a good diversion from her busy schedule. “I enjoy running as a stress reliever,” she said. She also noted that her teammates are among her best friends. “I’m a good runner, not a great runner,” she said. “I love my teammates and they motivate me.” Her biggest thrill as a competitive runner so far has been being a part of the West Forsyth girls cross-country team that was the runner-up at the State Championship 4-A meet this past fall.

In addition to competing for West Forsyth, Jasmine enjoys running at various locations during family vacations. Her family has traveled extensively so she has had the chance to do long runs with her brother Alexander at many interesting places including the Grand Canyon, Mount Rainier and Bar Harbor, Maine. “On my runs on vacations, I get to see some really cool places,” she said.

“She is very outdoorsy,” her mother remarked, adding that “we like to go camping, and she schedules time to run wherever we travel. She runs all year round.”  Staying in such good shape gave her the opportunity to finish the Mistletoe Half Marathon a few weeks ago in Winston-Salem.

For all of her success in the classroom and as an athlete, Jasmine is most proud of her accomplishments as a musician. She plays both the piano and the violin. Included among her many honors as a musician has been her selection to the All-County Orchestra for the last three years.

This past summer, she was invited to participate for one week at the prestigious Young Composers Program in Cleveland, Ohio. As part of her participation in this program, she composed a piece for the cello and violin. This is among her proudest accomplishments.

Composing music is Jasmine’s biggest passion. “I love to compose,” she said. “I have written a lot of music for the piano. My first composition was a piece that I called “Serendipity,” and we played this in the ninth-grade orchestra.” Over Christmas break, she has been recording various pieces that she has written, and she plans to soon put 10 of them on her personal website.

Jasmine has likely inherited much of her musical talent from her parents who are both lifelong musicians. Her mother Connie studied music at Colorado University where she earned her undergraduate degree and at Georgia State University where she received her master’s degree. Her father Scott is an opera singer. He earned his undergraduate degree from Georgia State, and his master’s degree from the University of North Carolina School of the Arts.

Jasmine indicated that she has been involved with music for “as long as I can remember, and my mom is my teacher.” In addition to playing the piano and violin, her mother noted that she is also a talented singer and dancer. She sings in the adult choir at the Greek Orthodox Church in Winston-Salem, and after graduating from a ballet program at the UNCSA at 14, she has performed as a dancer in the Nutcracker for the past four years.

Jasmine’s most impressive characteristic may be her altruistic spirit. She and her brother have performed together, entertaining residents in local nursing homes for the past three years. They call themselves the Clemmons Troubadours. They have also performed at the Samaritan Kitchen in Winston-Salem. Jasmine is also an active volunteer at Baptist Hospital where she has played the piano in the hospital lobby.

Since she is still only a junior, Jasmine is still contemplating her plans for college. She will be applying to a number of colleges and universities including UNC – Chapel Hill, Wake Forest and Yale. She is planning to major in music composition, and her career goal is to compose film scores.

The future certainly looks bright for Jasmine Marshall. Her combination of talents and her ambitious spirit should serve her well.