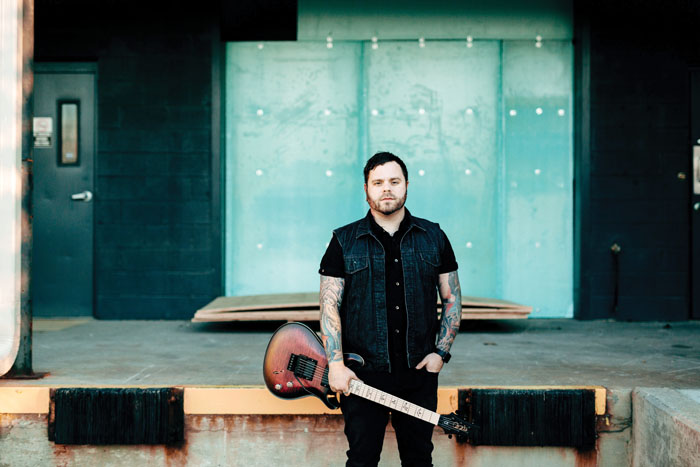 Grammy-nominated musician Dustie Waring is guitarist of the metal band, Between the Buried and Me. He is a graduate of West Forsyth High School. Photo courtesy of PRS Guitars

West Forsyth High School graduate Dustie Waring is up for a Grammy. He is the lead guitarist for the group Between the Buried and Me. They are nominated for best metal performance for the song, “Condemned to the Gallows.”

“We were told that we had been nominated and were all very surprised. We will wait and see what happens,” Waring said. The Grammys will be held at the Staples Center in Los Angeles on Feb. 10. “I’ll take my sister with me. We’ll get a good picture for my mom.”

Waring says the band was shocked by the nomination since they play progressive metal. “We are not Ariana Grande or anything. The nomination is just a very eye-opening pat on the back. It’s a, ‘you guys have worked really hard and finally wrote a record that got noticed.’ We are lucky enough to have a big following.” Waring has over 25,000 followers on his Instagram social media account and countless fans that come out for concerts. “It’s been a special thing and for it to go this far. We are all just kind of like, ‘Wow.’ We are a mellow and humble group so we are all internalizing it (Grammy nomination) in our own way.”

Waring began teaching himself how to play the guitar when he was around 9. He never took a lesson. “It’s in my blood. My dad and uncle are musicians. I always wanted to be in a band and play shows,” Waring admits.

Waring’s band from high school was noticed by an agent. Blake Richardson, who went to Mount Tabor, was also in the band. “Blake’s dad took us to a lawyer buddy of his to make sure we weren’t getting screwed over.” Eventually, Waring took over for the lead guitarist for the group Between the Buried and Me. Richardson began to play the drums.

The band has played around the world in places like Canada, Mexico, Europe, Singapore and the Netherlands. But Waring says he likes playing in the States the most. He also says it is not as exciting as most think. There is a lot of downtime.

“It is more boring than what you would expect. We wake up and try to find the best coffee joint. We do a sound check. We hang out and watch TV on the bus. Some people go to the gym. There is a lot of waiting. Waiting to perform. It’s fun. Sometimes you are in fun cities and have friends to go here and there with but nothing too crazy. If we are out of the country, we do a lot of sightseeing. We are a pretty mellow group of guys. We don’t mind hanging out and just watching sports.”

Waring also has a signature model guitar with PRS Guitars. “To me, they are the greatest guitar manufacturer in the world. I have been lucky enough to play their guitars for over 10 years now and lucky to have my own model.” While Waring moved to Nashville a year and a half ago, he likes to work with a lot of North Carolina companies. “I work with a company out of Wilmington called Mojotone. Daniel Klein at Port City Amplifiers is another person I work with.”

As for advice to other aspiring artists, Waring says, it will definitely be difficult. But if music is the path you want to pursue, anything is possible. “It’s not the easiest thing, but as long as you put your heart in it and do your best, there’s not much you can’t do. I would recommend you doing something original. Don’t follow trends, that stuff doesn’t last long. The goal is longevity.”