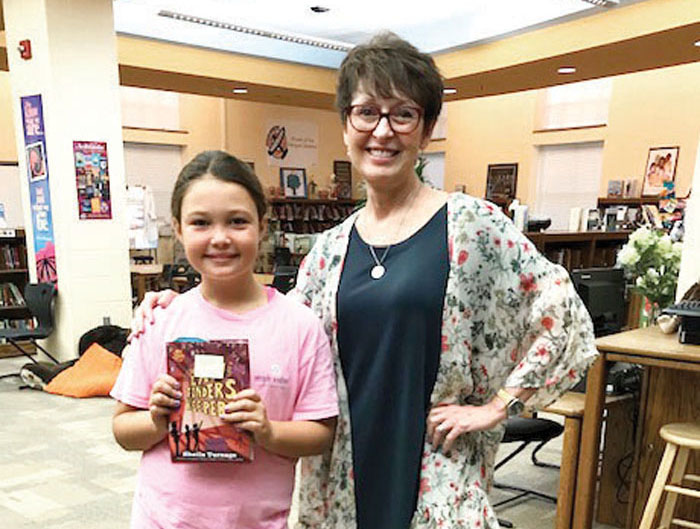 Lisa England won the Media Coordinator of the Year award for the state of North Carolina. The honor is given once a year by the North Carolina School Library Media Association and the Frank Morgan Elementary librarian was chosen for the 2018 award. “It is an honor to be chosen, but there are countless media coordinators working tirelessly in the trenches every day. It is not an easy process to be considered for this award. A great deal of work is required by the media coordinator once they have been nominated and I know there are many others that should be recognized as well,” says Lisa. “We support students, staff, parents — we try to support everybody. It’s a partnership with the entire school community.”

The foundation of reading came from Lisa’s father. The family was raised near the mountains of Tennessee. Her father was a laborer but was an avid reader himself and would read to her all the time. He loved poetry and spent many hours writing his own poems. “My parents were both from very poor Depression-period families,” notes Lisa. “My dad was a very humble person. When he submitted poems to two publishers they were accepted for publication, but he never published and left us quite a legacy in his poetry.”

Lisa’s foundation of a giving spirit comes from her mother who took in countless foster children. At first it started with babies who had special needs and were literally left behind at the hospital. Then, when Lisa was a young girl, they brought in a girl named Laverne. Little Laverne was six and non-verbal. Lisa was only five at the time. “I was told she could be violent. My mom asked me to sit quietly and put me at a play table with shaving cream the day she was brought to our home. While the social worker was talking, Laverne came over to the table. She drew back her hand and scared me a little. But then she splattered the shaving cream everywhere! That was my first encounter with Laverne. Working with her as a family and playing school with her to help her catch up was my first ‘teaching’ experience.”

When Laverne was 12, Lisa’s mother was diagnosed with what the doctors thought was breast cancer. “By this time Laverne was bigger than my mother and a little hard to handle. She would lash out at times. She was moved to the children’s home in the area during my mother’s illness and she adjusted very well. She would come to our house on weekends. They taught her a trade. The decision by the state was to leave her there until she turned 18. She was eventually able to get a job, get married, and move back into the Smoky Mountains. My parents were sacrificial when it came to children.” As a result of her experiences as a kid, Lisa says she is very sympathetic to not only mental or physical differences, but cultural differences as well.

Lisa also leaned on music. She loved singing and playing several instruments. Her brother did as well. In fact, when her older brother would sign up for gigs at places in Atlanta and Florida, he convinced his parents to let Lisa come and sing. Lisa loved music and performing. As a result, she later majored in music.

When Lisa became a mother, she knew she wanted to stay at home to raise her children. However, when her children were two, four, and six years old, Lisa was told she had a rare form of stomach cancer. “At Duke University, they didn’t have statistics for anyone my age with stomach cancer. I was told when I was 32 that I had a 30 percent chance of surviving 18 months. That was devastating. But after radical surgery and chemotherapy, I survived.”

At one point she was under 100 pounds. During a blood transfusion, Lisa looked at her oncologist and asked how he takes care of people like this every day. He told her then that cancer patients were the only group of people he knew who really had their priorities straight.

In 2005, almost 15 years after her first diagnosis, the cancer returned. By that time the CDH1 gene had been discovered. Lisa’s entire stomach was removed. The worst part was finding out that she had a 50-50 chance of passing it to her three children. “Without God in my life and my faith that He will carry me through, I would not be here.”

Sadly, she found out her daughter also carried the gene. Bethany chose to go to Boston to have her stomach removed as a preventative measure. Many other family members have followed suit and several others are still to be tested. The mutation is extremely rare with less than 200 families in the world as carriers. “I am still the only CDH1 gene mutation patient treated at Duke, as far as I know.”

But miraculously, Lisa beat the doctor’s predictions and began to heal. The doctor was right, however, in the fact that Lisa no longer viewed life the same. Surviving cancer was a turning point. “Do I feel perfect every day? No. Has my life changed? Yes,” says Lisa. “Stress can be a terrible thing. Life can certainly be difficult at times. But I am enjoying a phase in my life I wasn’t sure I would ever see. I am a GiGi to three beautiful babies. Our family is close and supportive of one another. I am blessed.”

After surviving cancer, Lisa was drawn to part-time work as a media center assistant. She knew being a music teacher would be too tiring during her recovery. She has found her niche. After beginning her master’s degree in library science, she was hired full-time at South Fork as the media coordinator. Very early in her new career, she met three students who were from Vietnam. They spoke no English and so Lisa spread out books on the table for the children to choose from, like she often does. “Every time, all three of those girls would choose a book with a character that looked like them on the cover. I think as students get older they gravitate more to the content of a story. Our job as media coordinators is constantly evolving. But I am hanging on to the literacy piece because that is the beginning of everything a child needs in elementary school. Our job is to choose literature that speaks to every child.”

Incorporating lessons with music or dressing up in costumes as characters in books is not uncommon for Lisa, who is currently the media coordinator at Frank Morgan Elementary. She will measure out a space in the entire library so that students can visually see how big a squid can grow. Recently, after the winter holiday, she could tell kids were in a slump after returning from the break. Lisa therefore put on her cape that says, ‘Reading is for Superheroes.’

“I try to be a positive influence or find a way to make it fun. We have a wide range of kids at Morgan. If they get a hug from me or word of encouragement then I have done my job. I share my story every chance I get. I think it is important that kids know a cancer diagnosis is not the end. I have had parents thank me for talking to the children because often times there is a grandparent or someone else going through it.”

Something Lisa loves almost as much as she loves teaching children is making sure each child has a book in their hand. She believes reading is just as important as technology in their formative years. The act of holding the book, following the words, colorful pictures, and turning the pages will stand the test of time. “I’ve spent thousands of dollars buying E-books. But our students still prefer a book in their hands. This talk several years ago that books are going to disappear – I think we have proven that wrong.”

Lisa believes a book can help a child through different circumstances and instill a sense of hope. “There’s a book that just came out about a little girl from Venezuela. She has to move to a school in America. It talks about various children adjusting from other cultures. At the end, the girl is just beginning to feel accepted. After I read that, one of our students came up to me and said, ‘That is me in the book’.” Lisa pauses at the thought of this little girl being so entranced by the book. A tear or two creeps into the corner of Lisa’s eyes. “That is why I do this. I think it helped her navigate a little bit better.”

Lisa has chaired the North Carolina Children’s Book Award Committee for 14 years. This program allows children — not adults — to nominate their favorite titles each year throughout the state. Each spring, students across North Carolina get to vote on the selected titles. “As far as I know, it is the only state literary award that allows children to have a voice. I think it is so important in teaching them the voting process, being good citizens, the importance of literature, and letting them know their voice is important.”

Our neighbor’s positive influence on children who come from all walks of life is a shining example of what children think of when envisioning the word, librarian. She likens to a quote by Victor Hugo. “To learn to read is to light a fire; every syllable that is spelled out is a spark.”