Drive and determination: Gutierrez doesn’t let setbacks get in the way of wrestling career 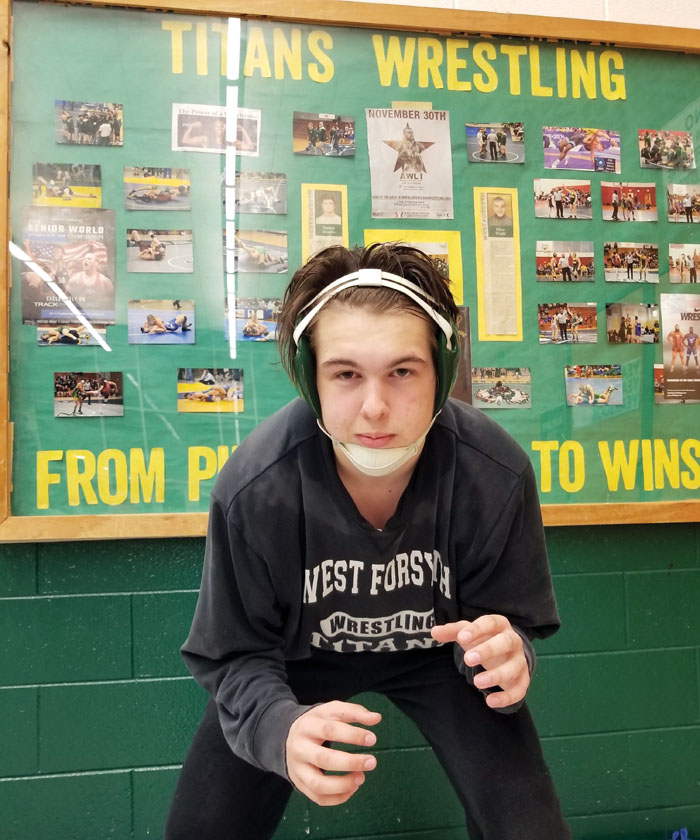 Matt Gutierrez’s wrestling career at West Forsyth has been one of perseverance.

Gutierrez, a senior, has wrested for the Titans all four years and has endured growth spurts, untimely weigh-ins, a coaching change, getting sick at the wrong time, injuries, and dropping an astonishing 16 pounds over a three-day period because the team needed him to.

“Pretty crazy, huh?” Gutierrez said with a laugh. “All this because all I wanted to do was follow in my brother’s footsteps.

“I was in eighth grade when he was a senior and I would come to a lot of the matches,” Gutierrez said. “The summer before my freshman year, I went to a couple of tournaments with (former Coach Maurice) Atwood, an that’s when I knew it was what I wanted to do. I had never set foot on a mat until then. I just knew how much my brother loved it and I figured that I would. He has been my main mentor and motivator for me in my career.”

Gutierrez wrestled on the junior varsity team at 145 pounds as a freshman and admitted it was a struggle.

He grew from 5-feet, 6 inches to 6-feet, 1-inch before his sophomore year and wrestled at 182 pounds.

“I think that weight suited my skills a lot better,” Gutierrez said. “I wrestled a lot better because that weight requires the matches to be a little slower. It required more strength and technique than speed, which wasn’t one of my strong suits as a freshman.”

Gutierrez finished his sophomore year with a 35-11 record but missed out on wrestling at the regional competition because he got sick a few days before. Missing the regional meant that he would not be able to qualify to wrestle in the 4-A state tournament.

“A huge letdown, but I didn’t have any choice,” Gutierrez said. “Just bad timing. That has served as motivation for me ever since.”

Last season, Gutierrez went up in weight class and began the season wrestling at 220 pounds. About halfway through the season, Coach Jason Hooker approached him about dropping down to wrestle at 195 pounds.

“I weighed 216 pounds at the time, so I had to drop about 21 pounds,” Gutierrez said. “And our next match was in about four days. Plus, it was right around New Year’s Day, so I was probably carrying extra weight because of the holidays, too.”

Gutierrez stayed away from food for the most part over the next several days and increased his aerobic activity to try and drop the necessary weight.

“Our first workout was on Jan. 2, and I lost about five pounds during that,” he said. “The next day, I lost about five more pounds at practice. I would do extra jump roping before school every morning, spit out any extra saliva after sucking on Jolly Ranchers, and limited myself to eating two pieces of pineapple and drinking six ounces of water. When the time came to weigh in for the match, I made weight. That was by far the hardest thing I’ve ever done.”

Gutierrez also tore the meniscus in his knee at the beginning of his junior season and was forced to forfeit several matches, which affected his overall record and his seeding for the regional tournament.

“Because of that, I had to wrestle the No. 1 seed in my second match, and he beat me,” Gutierrez said. “I had to wrestle my way up through the consolations and was in the semifinals before I lost 3-2 in the final seconds. It was tied 1-1 with about 15 seconds left, and he scored a takedown and ended up beating me 3-2, so I missed out on qualifying for the state tournament again. That’s been driving me all this year. Getting to the state meet this year is what I want more than anything.”

Gutierrez entered this week’s matches with a 14-10 record and noted that he had already wrestled some of the best competition in the state and the country.

“I wrestled one person who is ranked No. 15 in the nation for our weight class,” Gutierrez said. “Wrestling against competition like that will only make me better.”

Gutierrez, who is also active in Fellowship of Christian Athletes and the West Wackos, said that he might wrestle in college in the right opportunity comes along.

“If not, I want to study sports psychology when I go to college,” he said. “That’s fitting, because at first I loved wrestling because I looked up to my brother and I wanted to be like him. And I’ve learned that wrestling is really about your will versus another man’s will, and the best man wins. That’s something that really appeals to me and has been driving my life for the last four years.”