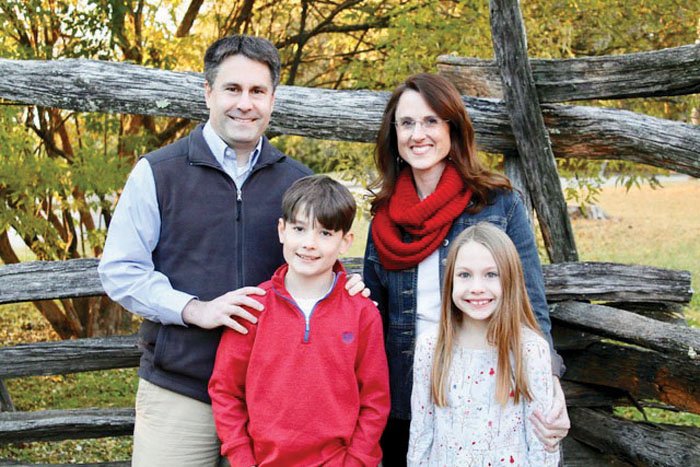 As a child growing up just outside of Los Angeles, it was not uncommon for Eric Hein to see a famous face or two or to spend time with them. “Shannon Doherty was a year ahead of me at school,” recalls Eric. “Actor Beau Bridges was an assistant basketball coach for my middle school YMCA team. His brother, Jeff, came to a game but his father, Lloyd, was a regular attendee. I played point guard and Jordan Bridges was our center,” notes Eric. “Clearly, neither of us had much of a future in basketball. The biggest impression that the Bridges left on me was that they were very approachable and down to earth.”

When it came time for college, Eric attended and graduated from Pepperdine University. He thought he wanted to go to medical school. However, he took a year off to decide and to make sure he was certain of his decision. During that time, he also contemplated a career in coaching and teaching because he enjoyed being around kids. Ultimately, however, he decided upon a medical path. When he went to medical school in Norfolk, Virginia, Eric enjoyed a lower cost of living and less traffic congestion than he had grown accustomed to in California. During his fourth year of medical school, Eric went on a mission trip to Honduras. It was on this trip where he realized pediatric ophthalmology was where he would focus the rest of his life’s work. “These kids were ostracized because they didn’t have straight eyes. So we would straighten them. We used a local hospital but brought a lot of equipment like sutures and basic instruments. It impressed me how much you could do with relatively few resources.”

Eric continued his education with a residency at Vanderbilt. “I met my wife Jennifer swing dancing in Nashville. Nashville was similar to California in that it had music celebrities but tamer in some ways I think.” The couple eventually ended up in Birmingham and believed they would settle there forever. By this time, they had two children and Eric was working at a private practice. “I thought I would finish my career in Birmingham, but people have different opinions of how you would like to have things done. I think there have been some disappointments in people you could trust and didn’t trust.” As Eric began to doubt whether Birmingham would be a good fit for the rest of his medical career, he began to look to other places to take his family. He had been to Winston-Salem for a wedding and liked the area. When Wake Forest was looking for a pediatric ophthalmologist, Eric applied for and got the position. The family moved to North Carolina.

“I enjoyed working with the residents and the academic field. But part of the reason I went into private practice, is because I had more control of how I saw patients and when. Wake has an eye center but not all that are pediatric-friendly. I wanted to open something specifically for kids and families.”

In 2017, Eric opened his own practice in Clemmons, Triad Pediatric Eye Physicians. “As a younger doctor, you are so used to coming out of med school and training. You are used to being told how to do things. But there are some things I eventually realized I knew how to do better. You start to know yourself better. Technically what I do now is I try to see people quickly so they are not waiting a long time. Then I do notes at the end of the day. Not every place does that but then my patients can get in and out.”

Another reason Eric wanted to get his own practice was because he was able to provide surgical procedures at a more affordable cost for patients. “I wanted to set up an outpatient center at Wake and then people wouldn’t have to park in the garage and come into the hospital. But I couldn’t make that happen at Wake and I don’t know all the reasons for that. So I opened my own practice because I knew there was a segment of population paying an extremely high cost for surgeries that could be paid for more efficiently and at a lower cost.”

As for advice to other parents, Eric says that most pediatricians will screen your children from ages three to five. In sports, Eric notes, any type of projectile such as a paintball or even Nerf guns can cause damage to the eyes. “Some pretty serious injuries come with golf balls because it’s small enough to where it can ricochet in the eye. Fishing is another one. Kids going fishing get a hook caught in the eye. But with the major sports, there are not as many eye injuries.”

Patients have questions not just about injuries, but also about the distinction that can be made between being an ophthalmologist and an optometrist. “We have some very good optometrists in the area but the difference is in how long you train.” An ophthalmologist like Dr. Hein has attended medical school and has had surgical training for a total of nine years. Whereas an optometrist has had four years of school, and maybe one year of training and cannot operate on patients. Consequently, optometrists can only prescribe contacts or glasses. They usually do not see children until the age of five. However, sometimes, they also prescribe vision therapy, a therapy that comes with some controversy.

“The idea is you can exercise the muscles and visual system to get the improvement you need. There may be some benefits where eyes drift apart and you can retrain them a little bit. But I find there to be two problems with vision therapy. One, there are few studies that support it. There’s not a lot of evidence-based trials,” notes Dr. Hein. “Two, it is quite expensive. Everybody is different, so I can’t say there is no chance it would help. But I have never seen a patient before vision therapy because I do not recommend it. But I have seen patients after they have tried it who have then come to me for help.”

Whatever the patient’s situation, Dr. Hein says he loves seeing his patients. “The thing I love about my job is getting to meet people from all walks of life. I do get some adults. I do enjoy that because people have a lot of great experiences and stories.”

While the people Dr. Hein now has as neighbors and patients may not be on the big screen as they were in Hollywood, the personal interest in our kids sure makes our neighbor a star in Clemmons.