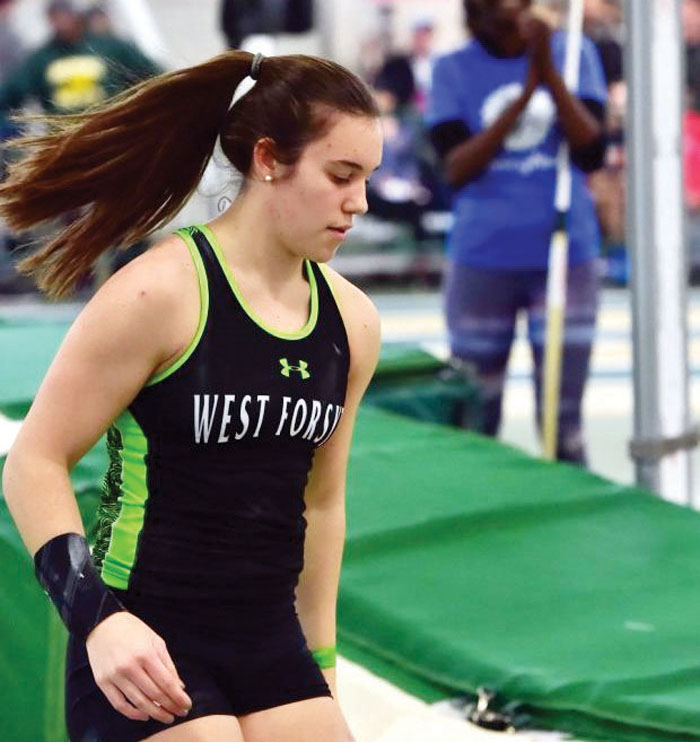 Lindsay Absher is well on her way.

Absher, a senior at West Forsyth, continues to achieve goals and break records as the standard for girl’s pole vaulters in North Carolina.

She set a new high school state record two weeks ago in a meet at JDL Fast Track in Winston-Salem by clearing 13 feet, 1 inch to break the previous record (13-0.75) that had been established in 2015.

Last Saturday, Absher bettered that mark by clearing 13 feet, 2 inches at the National Pole Vault Summit in Reno, Nevada, where she finished second in the High School Elite Division. That height is also the second best in the country for a high school pole vaulter, one inch behind a vaulter in Virginia. The National Pole Vault Summit featured several Olympians and world and national record holders.

So, what’s left for Absher, who has signed to pole vault at Purdue University, to accomplish this indoor season and for outdoor track in the spring, where she is the defending NCHSAA 4-A state champion?

“I want to continue to work consistently toward jumping 13 feet, 6 inches indoors and 14 feet outdoors,” said Absher, who has unofficially cleared 13-8 before in practice. “I’d like to win the indoor state championship this season and repeat as outdoor champion.”

She’ll have her chance at the indoor state meet on Feb. 9, which will also be held at JDL Fast Track. Absher finished second in the event as a sophomore — her first season competing in indoor track — and was also the runner-up last season, which sounds inconceivable given her level of success.

The truth is, she was hampered by the flu at the state meet.

“I left school early the day before the state meet with a 103-degree fever,” Absher said. “I felt pretty terrible. I went home and slept the rest of the day, slept most of the morning of the meet. When I woke up, I was determined to go compete. I cleared 11-6 and had I cleared one more bar, I would have won. This year, I plan to not be sick.”

“Lindsay’s mom called me that Friday afternoon and told me she had to leave school early because she was sick, fever, the whole business,” Newsome said. “But she told me she wanted to vault, and I just told them to be careful. She shows up, and I don’t even know how she ran down the runway, but she ended up finishing second. And let me tell you, she was not too happy about that. Lindsay’s a competitor and a phenomenal athlete. She’s got that drive that elite athletes have and that fuels her.”

How did Absher discover pole vaulting? How does someone willingly volunteer to propel themselves skyward after running with a long, heavy pole and reach the heights that Absher has?

“It’s a funny story,” Newsome said. “I was at my daughter’s gymnastics class a few years ago and was watching her tumble,” Newsome said. “And I saw a few of the older kids tumbling, and one in particular caught my eye because she was just so fast and so powerful. And I thought I recognized her as being the granddaughter of a principal I used to work for at an elementary school and I thought she was a student at West. As it turned out, her older brother was also on the cross-country team, so I asked him if he thought his sister might be interested in giving pole vaulting a try. He told me she was already the strongest person in the family and anytime someone wanted any furniture moved, they would always call Lindsay.”

Pole vaulting didn’t initially come as easy as gymnastics did, for Absher who started had doing competitive gymnastics since she was 8.

“He gave me a crash course on what to do and it wasn’t really working too good at first,” Absher said. “I felt very uncoordinated after my first few attempts. I asked him if I had to hold the pole the way he was showing me because I was actually left-handed.”

“It was a like a light-bulb went off,” Newsome recalled with a laugh. “I told her to just start doing everything the opposite of how I showed her. By the end of practice, she was clearing 8 feet. She went on to win the conference championship as a freshman after only competing for about half the season.”

Absher trains at Vault House in High Point three days a week and still goes to Salem Gymnastics a few times a week for workouts that help her with pole vaulting.

“There are some huge similarities,” she said. “The running, working on your core strength and arm strength, and you have to take corrections very well. I’ve been used to being upside down in gymnastics from a very young age. I started when I was 2. Being upside down has never been a problem for me.”

Absher competed in Reno with a pole that measured 13 feet, 3 inches and weighed 180 pounds. She has an eight-step approach — eight steps on each foot — which covers about 98 feet on the runway before she plants the pole and thrusts herself towards the sky.

“The appeal for me is that I love competing,” she said. “I love being around people who push me, and the pole-vaulting community is full of encouragement. You can be having your best day or your worst day and no one will stop helping your or cheering you on.”

The following members of the West Forsyth indoor track team have also qualified for the NCHSAA 4-A indoor state championships, which will be held on Saturday, Feb. 9, at JDL Fast Track in Winston-Salem.