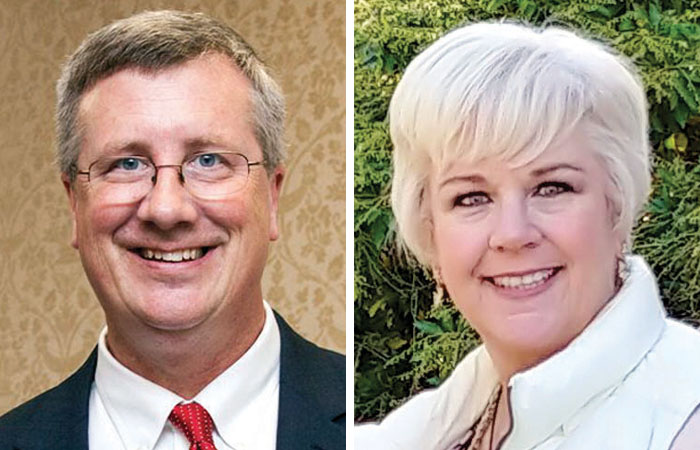 Craig DePuy, who is the director of field services for the Boy Scouts, is the chairman of the fundraiser that is being called the Food Pantry Awareness Initiative, left, and Susan Joy, the president of the Rotary Club, right

The Clemmons Rotary Club will be partnering with the Village of Clemmons to sponsor a community food drive for the month of February. The club will organize the event to generate both food and cash donations to benefit the Clemmons Food Pantry.   Susan Joy, the president of the Rotary Club, indicated that “every year in February the food pantry is our monthly project.”

She remarked that the annual food drive has transitioned from requesting food donations to encouraging cash donations as well. “We realize that the local pantries have learned how to manage monetary donations,” she said. “They also know how to best allocate funds for their specific needs.” Last year, the club raised about $1,000 in addition to the food donations that were received.

Joy also indicated that the club has become aware that the needs of the Clemmons Food Pantry involve items other than food.  There has been an increased effort to request items that families typically need on a regular basis. “One of the funniest things that we did,” she said, “was to donate a pallet of toilet paper from Costco.”

Craig DePuy, who is the director of field services for the Boy Scouts, is the chairman of the fundraiser that is being called the Food Pantry Awareness Initiative. The goal for this year’s campaign is to raise $2,000, that is roughly double the amount that was raised last year. Each dollar raised will be converted to seven dollars in spending power.

DePuy has developed a creative plan to encourage club members to meet this year’s goal that involves four weekly themed fundraisers. The weekly themes and the plan for each week are as follows:

Week 1 — Take a Bite Out of Hunger. Members will sacrifice eating meals out that week and contribute the value of those meals to the week’s campaign by bringing that amount to the next meeting.

Week 2 — Heat or Eat. During this week, participants will be encouraged to donate the value of a week’s heating bill in cash to the next meeting.

Week 3 — The Power of Change. The theme for the week will be to collect change during the week.  The change will be converted to bills for the donations for the week.

Week 4 — Weekend Sacrifice. Everyone will give up one weekend activity such as going to a movie. The value of that event will be contributed.

Joy indicated that the public is welcome to attend the Rotary Club’s meeting next week. This meeting will kick off the fund-raising plans for the food pantry. It will take place at the Crosby Pub in Clemmons at 6 p.m. on Wednesday, Jan. 30.

The Village of Clemmons website shares several ideas for how groups and individuals from the community can also generate donations for the February food drive. One unique idea indicated that some people ask for donations in lieu of gifts for events such as birthdays, weddings or baby showers. The website also mentions that donations can be dropped off at the Village Hall from 8 a.m. to 5 p.m. on weekdays.

For donations made directly to the pantry, an appointment can be made by contacting Syd Cunningham at 336-406-0752.

Kathy Kovack is the executive director of the Clemmons Food Pantry. She is encouraged by the efforts of the Rotary Club and other local organizations to support the pantry with food and cash donations. “February is typically a good month for us,” she said. “The community has always been so supportive, and we count on food drives to get us through the summer.” She also indicated that cash donations such as those given by the Rotary Club are especially valued so that food can be purchased during the summer months when there is a slowdown in activity involving food drives.

Kovak is concerned that if the government shutdown continues for an extended period of time that there will be an effect on resources available at the pantry. “Pretty quickly, we are expecting to begin to see government workers, and people that we typically don’t see,” she said.

An extended shutdown will also affect food stamp recipients who now receive their benefits with a credit on their debit cards.   Kovak noted that this past Sunday was the last day that they received money on their cards. She indicated, however, that media attention to the shutdown is bringing into focus the importance of food pantries both nationally and locally as more clients are in need of the resources that pantries make available.

On a personal note: I have been volunteering at the Clemmons Food Pantry for about the last six months. It is a dynamic place with many volunteers who have given their time and efforts for many years. Their experience shows in how well the pantry is organized and how the volunteers give so much of themselves to the daily operations. The gratitude shown by the clients is heart-warming. I cannot think of a better place in our community for one to give their time or contributions or both.