Your Neighbor: All walks of life: Australia native creates toy where kids could see each other’s strengths 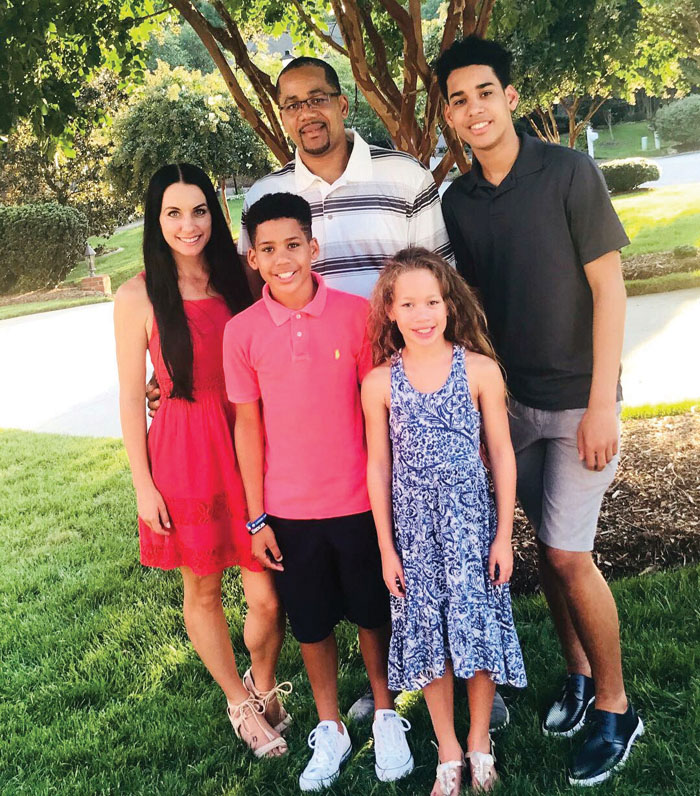 Bianca Woodberry with her husband Steve and their three children

“People in Australia are very laid back. There is drive but there is not as much pressure. College sports are a huge thing here. In Australia, you go to get your education but here you have to go to college and do all these things. I love that drive here,” says Bianca Woodberry, an Australian native. “Christmas time in Australia is super hot. But now that I have switched to a cold Christmas here, I cannot imagine going back to a blazing hot Christmas in Australia.”

Bianca’s parents were from different cultures as well. Her dad is German. Her mom grew up in England. Bianca learned from a young age that while there are many cultures around the world, humans are innately the same. So when she fell in love with an American basketball player, it became clear the two had the same idea of happily every after.

“Steve played professionally in Australia. I was a cheerleader. We lived in Europe, Lithuania, Greece and Sweden,” Bianca explains. She found herself entranced by the differences in culture. “Lithuania and the Baltics was interesting to see. In Russia there is the rich — like mafia rich — and the very poor. I remember looking out at the streets after I put my trash out and seeing a woman going through it. In Australia and here we have middle class. But there they don’t. You are either very rich or very poor.”

After traveling, the couple decided to have children. First, they had two boys in Australia. Then, Steve retired as a professional basketball player and began to coach college sports. He began coaching at Missouri State. Next, they moved for his next coaching gig in Oklahoma. The couple added a little girl to their growing family. Then, in 2014, the Woodberrys came to North Carolina where Steve works as an assistant coach for Wake Forest’s men’s basketball team.

All the moving was taxing, which is why Bianca is glad to have been here for five years. “The older the kids get the harder it is to move. But I tell my kids all you need is one or two good close friends and you are good,” says Bianca. She also believes it is important to engross yourself in the community which is why she was happy to work at Messiah Moravian Preschool and jumpstart the athletic booster club at Jefferson Middle School. “You have to live your life and grow where you are planted. I live my life as though I would be here for many years. I tried to teach my kids that, too. We try to be present in the moment.”

Learning about human nature throughout the world, Bianca realized the importance of teaching children about relationships. “If we can embrace each other’s strengths and differences we can make an impact in the world through our children’s eyes.” To echo these sentiments to other children, Bianca wanted to create a toy where kids could see each other’s strengths as a benefit to one another. The parts are interchangeable which can make an animal have different strengths in different areas. Bianca is calling the toy Petsters and came up with the slogan, “The best in me sees the best in you.”

“I am working with a children’s author to tell the story. The idea is they may be on this adventure and the Petster needs to get out of it. The goat is stuck and quickly needs to get out and gets help from the cheetah. Petsters unite. They change parts.”

Bianca also connected with David Dinkins, program coordinator of mechanical engineering technology at Forsyth Technical Community College. “They have students who need these real-life projects to be working on. We are tweaking the prototypes and close to having them done. To be talking about injection molding is pretty amazing. We are excited to Kick Starter our campaign in a month.”

Having an entrepreneurial spirit has always been inside of Bianca. She received a paralegal degree online and worked at a law firm in Oklahoma. “It is so important to believe in yourself and have the courage to go through with your vision. Walk through doors when they open. Petsters is a way to teach about social consciousness through play. Meeting people and diversity fosters creativity.”

Perhaps our neighbor is one of the best to teach children about all walks of life. She is not just preaching about the importance of recognizing the strengths in all, Bianca is a living example. Maybe even adults should recognize to learn to live by her slogan, “The best in me sees the best in you.”