After the Final Bell: Brianna Lucero excels in class and in three sports 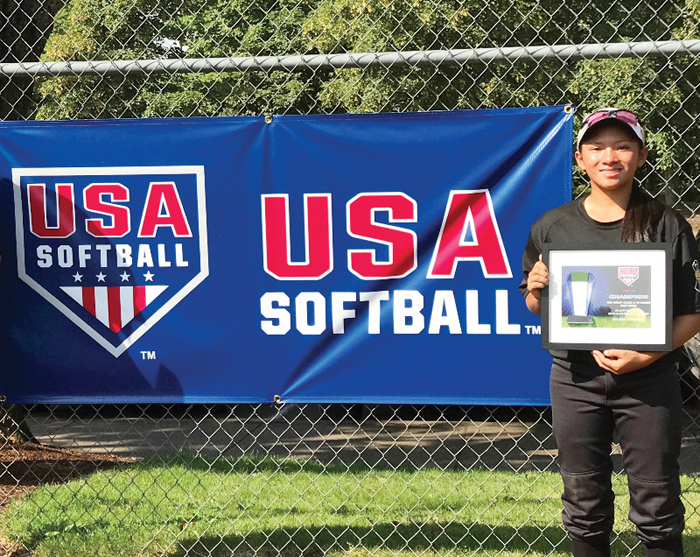 One of Bri Lucero’s proudest accomplishments as an athlete was being a member of the 2017 USA Girls’ Class A 18-Under team that won the Fast Pitch Softball National Championship in Salem, Ore.

Brianna Lucero stays up later than most in order to accommodate a busy schedule as a student and athlete. She ranks in the top 10 in her class at West Forsyth while participating year-round in three sports. In addition to taking six advanced placement classes, she plays softball, golf and basketball.

Brianna, who prefers to be called Bri, begins her school day at the Career Center at 8 a.m. where she takes four AP classes and then travels to West to take two more AP classes in the afternoon. Not only is she a terrific student, but she excels in all three sports that she is involved in during the school year. Bri has been a member of West’s varsity softball, basketball and golf teams. In her senior year, she is playing varsity softball and golf and also plays in the Hoops4Him Basketball League. Bri had a straightforward response when asked how she manages such a busy schedule. “I have to pull a lot of all-nighters,” she said, indicating that she gets less sleep compared to most people her age. A mature perspective also contributes to her success as a student-athlete. “I stay busy,” she said, “but I also try to prioritize everything I need to accomplish.”

During her high school career, Bri has taken 15 AP classes which is the equivalent to completing two years of college-level courses. She took AP world history as a ninth-grader, and she has challenged herself with many higher-level courses since then. When asked about what students should consider when making their schedule, Bri remarked that “you should take classes that you are interested in, but it’s also important to challenge yourself and take as many AP classes as you can manage.  It can make a difference when applying to colleges.”

Her success as an athlete has resulted in winning the Most Valuable Player award in JV basketball at West as a freshman and in varsity golf as a junior. As a golfer, she was a team captain this year and has also been recognized as All-Conference the last two years. Golf is a sport that she took up at a later age in her sophomore year, and she is now glad that she did. “It is important to try new things,” she said. “I tried golf, and now it is one my favorite things to do.”

While Bri has enjoyed much success as a basketball player and as a golfer, softball is the sport that she has played beginning at a young age, and the one that where she has succeeded the most. She started playing T-ball at the age of three, and then SWF Little League softball, followed by travel softball and playing on National Showcase teams. Her proudest accomplishment as an athlete was being a member of the 2017 USA Girls’ Class A 18-Under team that won the Fast Pitch Softball National Championship in Salem, Ore.

Bri has also contributed successfully to the softball program at West Forsyth. She has been recognized as All-State each year from 2016-2018 and was one of only two freshman starters on the West team that won the Class 4-A State Championship in 2016. One of her memorable moments was scoring the go-ahead run in the first game of the State Championship at Dail Stadium at N.C. State.

Bri credits her participation as an athlete for so many years as being a key to her success as a student. “Being an athlete has made me more competitive in everything, including in the classroom,” she said.

Despite her busy schedule, she has somehow found the time to give some of her time to community service. When her father worked at Salemtowne Retirement Community in Winston-Salem while she was in middle school, Bri worked there as a volunteer. She has continued doing volunteer work with the elderly by helping at the Trinity Elms retirement community in Clemmons.

Given her impressive resumé, it is not surprising that Bri has applied to a number of highly competitive colleges and universities. She expects to soon hear from UNC-Chapel Hill and N.C. State, but her first choice is Duke. “I have always been a huge Duke basketball fan,” she said, “so it has been my dream to go to school there.”

Currently, she plans to major in biology or biomedical engineering. Her favorite class in high school has been AP biology that she took last year with Mr. Mercer at the Career Center. She is considering a career in medicine to follow in the footsteps of three of her grandparents who are/were physicians.

Since she is about halfway through her senior year in high school, Bri’s college years are fast approaching.  Given her many talents and her terrific work ethic, a successful career will likely follow.