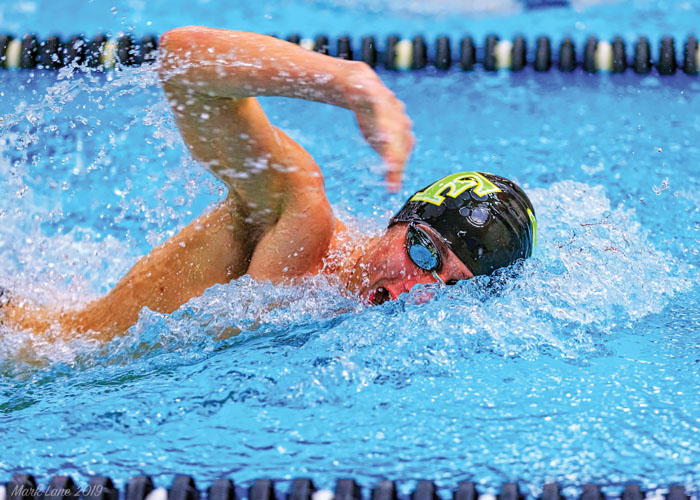 Justin Kranis knows he probably has one last crack at achieving a couple of his goals as a member of the West Forsyth swimming team.

Kranis, a senior, has been swimming for the Titans for four years. He will compete in the Central 4-A Regional this weekend at Greensboro Aquatic Center in the 500 freestyle and the 100 breast, events he has swum at the regional his previous three seasons, as well as the 400-freestyle relay.

The top eight swimmers in each event will qualify for the NCHSAA 4-A state championships, which will be held Feb. 7 at Triangle Aquatic Center in Cary.

Kranis swam at the state championship last season as part of the 200-freestyle relay team.

“I was actually an alternate, but Tucker Burhans had such great preliminary swims for his individual events that day that he decided to focus on those and not the relay,” Kranis said. “So, Coach Sandy (Thomerson) put me in the relay and I swam the second leg. It was a great experience to swim at the state meet. I hope I can get there for my individual events, but we will see about that.”

Kranis is one of the team captains this season and takes that responsibility seriously.

“I know how much I looked up to the captains on the team my first three years,” Kranis said. “It’s really an honor that the coaches put that trust in me to be one of those people that the younger swimmers can rely on for anything. Even though I practice with my year-round team most of the time, I still try to come to as many West practices as I can to be that presence around the team. I think that’s really important.”

He has been swimming since he was 5 years old, starting out in the summer league at Salem Glen pool.

“I loved it so much I started year-round when I was 6,” he said. “Outside of about a three-month break last year, I’ve been going hard with it since then. I know that the end of my high school season will probably be the end of my competitive career. I still plan to swim club in college, but I’m ready for a life without swimming as well.”

Kranis said that his favorite event is the 500 freestyle, which usually isn’t the first choice among swimmers. He finished third in the event in the recent Central Piedmont 4-A Conference meet.

“I think I was kind of nudged into doing it my freshman year for the good of the team,” he said. “Then it turned out that I was pretty good at it. I consider myself more of a distance swimmer now and it’s the event I put my focus into. I like to get into my rhythm and hold that pace. I feel like I challenge myself every time I race. I posted my best time in a year and a half at the conference meet, so I was excited about that.”

When he isn’t in the water, Kranis is active in Key Club and Crosby Scholars. He has also been inducted into the National Honor Society and National Art Honor Society. He plans on being a lifeguard and swim coach this summer at Clemmons West, which will be the third year he has done that.

“I’m still exploring several options for college but should be making a decision pretty soon,” Kranis said. “I know that I’ll take a long break from being in the water once the season is over. But swimming has given me so much. The friendships and the community have always been so great. That’s a big reason why I’ve continued to swim all this time.”