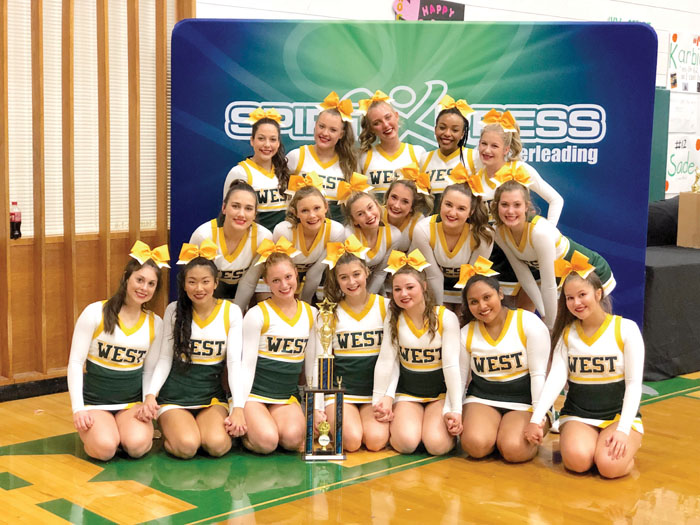 The West Forsyth cheerleading team has been ranked one of the top 40 teams in the country and will be televised on ESPN. On Feb. 6, they will be going to Disney World in Orlando, Fla., to compete in the National High School Cheerleading Championships (NHSCC). West has not competed at this particular event in over two decades.

“I don’t foresee us doing this every year,” says head varsity coach Lori Harper, who was also a West Forsyth cheerleader. “You kind of know when you have a special group at tryouts. I knew this spring we had a really good team.”

The 18 girls did really well at camp, sweeping multiple wins. During the year, the group has won every competition they attended locally and in other cities. However, in order to qualify for the NHSCC in Florida, the girls had to win regionals which were held in Greensboro. True to form, they won and qualified to compete in the Game Day Competition Division at Disney World.

The Game Day Competition at NHSCC requires a three-minute routine. The girls must perform a band dance, cheer and adjust for a situational sideline. “During the situational sideline, the announcer gives the girls a cue about the game and they have to know if its defense or offense based on whatever situation they are given. Then, it ends with our school fight song,” explains Harper.

Community camaraderie is not new to the West Forsyth Varsity Squad. From the beginning of the year, Harper has made sure the girls were active in Clemmons. For instance, they have made it a goal to thank our postal workers, firefighters and police officers. When a West Forsyth student was granted his wish from the Make-A-Wish Foundation, the cheerleaders supported and cheered for the student when he accepted the gift. They also hosted a youth clinic where younger cheerleaders get to learn some of the routines and cheer at a West Forsyth football game alongside the varsity squad. But now, all eyes are on Florida.

“Just the fact that we are going is big enough. If we beat out prelims and get to the top 20, we will be hugely successful. I can’t even process that. I’m focusing first on prelims.”

The event will be streamed live on Varsity TV. ESPN will broadcast the competition approximately a month later.