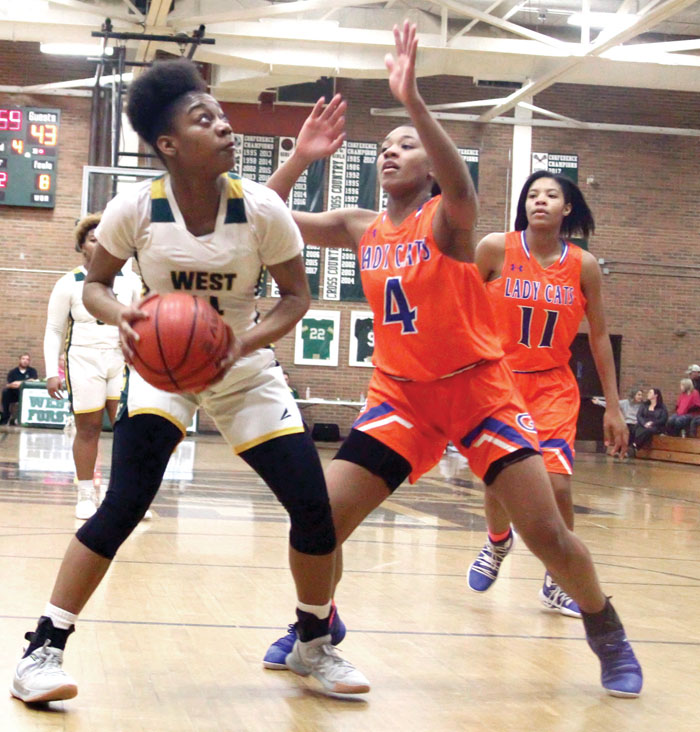 Basketball has proven to mean a lot more to sophomore Alana Gary for the last six weeks as she navigates a whirlwind of emotions on and off the court of Simpson Gymnasium.

Gary, sometimes a starter, sometimes the first player off the bench, helped steer the Titans for a key stretch of the season when the team was without one of their key pieces after point guard Callie Scheier missed three games because of mono in December and January.

“She’s the kind of player who will do anything you ask of her,” Coach Brittany Cox said. “Always wants to help the team, always wants to be a great teammate. She will do whatever we need her to do and can play all five positions for us. She is probably the most selfless player we have on the team and is usually quiet and introverted and never asks for any kind of special treatment.”

While Gary helped to pick up the pieces for the Titans on the court, her personal life had been suddenly shattered.

Charlene Warren, Alana’s mother and a staunch supporter of the girls’ basketball team, fainted at their house on Dec. 27.

“We were about to leave to go to my grandmother’s birthday dinner when it happened,” Gary said. “My sister (Ariel) was in the room with her when it happened and caught her before she hit the floor. She was responsive for a little while after that, but it became pretty clear to us that something bad had happened. We called for an ambulance about two hours later and we spent the rest of the night at the hospital. They originally told us it could have been a stroke. But after they ran some tests, they told us she had a brain aneurysm and needed surgery. Because I have a tendency to overthink things sometimes, I was researching what an aneurysm was, what causes them, how likely people are to survive, and what the aftermath and outlooks looked like. Some of what I was reading was really scary.”

“The message said ‘I can’t come to practice. Family emergency.’ But she didn’t get into any details,” Cox said. “I was already asleep that night and didn’t see it until I got up the next morning. I let her know that I hoped everything was alright. It wasn’t until I got to practice that her teammates told me she was at the hospital and what happened. That’s the kind of kid she is. She didn’t want to draw attention to herself despite what she was going through. She didn’t even want her teachers knowing. I went to see her at the hospital after practice and let her know we were there to support her however she needed us to and to not worry about basketball right now. Take care of your family.”

The surgery was a success but the recovery in the hospital and rehabilitation facility would last a few more weeks.

Gary spent plenty of time at the hospital in the days after the surgery. The Titans had a game coming up on Jan. 2 against High Point Wesleyan and no one expected her to play.

“She found out Callie (Scheier) wouldn’t be playing and decided that she had to be there for her teammates,” Cox said. “When she walked through those doors, she had the biggest smile on her face. And so did her teammates. She had already told everyone that she wasn’t going to play but she knew that her team needed her and didn’t want to let them down. She came up huge for us in that game. It was a great moment for all of us. She just decided that she needed basketball and I think it’s been kind of an escape for her since.”

Gary said that going through what she has gone through recently has given her a new perspective on basketball and on life.

“I knew my mom would want me out on that floor,” she said. “Any time I went to visit her, she’d always ask how we were doing. I’d have to keep her updated. Me being out on the floor was normal for her and normal for me. I knew she wouldn’t want me to just drop everything. It was something positive for me and something fun for me in the middle of all we were going through. It was definitely an escape and great for me to be around my teammates and coaches.”

Warren came home on Jan. 25. That was during exam week for Gary, who still managed to get to school and practice as well as make sure her mom got her medicine every day before she left for school and every night when she got home.

“My aunt and uncle have been there helping out and it’s great to have her home again,” Gary said. “I think it’s definitely made me appreciate her even more. I know it’s going to be a slow process, but her prognosis is good. She can walk and talk and is able to comprehend most things but can still get fuzzy here and there, but I know to expect that.”

Cox said that seeing the team rally around Gary and her family has taught them all a great lesson.

“I told her she taught me a lot,” Cox said. “So many times, we get caught up in winning games and what are we doing at practice that sometimes we take everything else for granted. Alana turned an unfortunate situation into a great lesson for all of us. It’s obvious where Alana gets her strength from. But’s it’s been really special to see all the support she has gotten — from our team, from her AAU teammates and parents and coaches — so many people have reached out to check on her and offer their help. It has been really cool to see when basketball is done right and people care about her not just as a player, but care about a kid and her family.”

Gary is hopeful that her mom can start attending games again soon — perhaps as early as this week.

“As long as she can handle the atmosphere, I think she’s ready to start coming again, but we’ll see,” Gary said. “I know we have all missed her being there cheering us on. I know I have. But I’ve gotten to cheer her on the last few weeks and that’s all that really matters. That’s kept me focused on the big picture.”