Your Neighbor: Bedside manner: After pregnancy complications, Katie Woltz gives back to the hospital 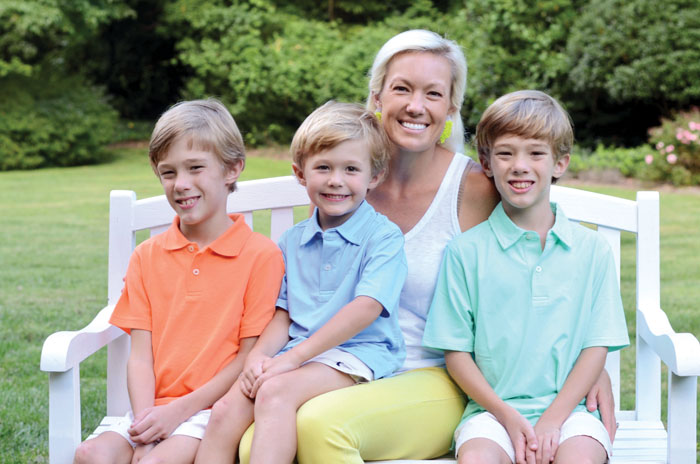 Photo by Rebecca McNeely Katie Woltz with sons Will, Marty and Jack

With an effervescent smile that never seems to fizzle out, Katie Woltz’s bedside manner was a perfect fit for the medical field. At Chapel Hill, she received a master’s degree in speech language pathology and accepted her dream job at Baptist Hospital. Working with patients who had strokes or traumatic brain injuries, Katie notes, “I loved working with patients and their families. It was a good combination of working in the hospital setting and having a personal relationship with the patients.”

In January of 2008, the couple found out they were pregnant with twins. “It was a total shock. There are no twins on either side of our family.” Knowing twins can be a higher risk pregnancy, Katie took a break from work. Her mother’s intuition proved to be spot on. Nearly halfway through the pregnancy, she began having contractions. Rationalizing that they were only Braxton Hicks, Katie went to bed.

By morning, the contractions were occurring every five to seven minutes. The doctor told Katie to come to the hospital immediately. “I was put on all these different medications to try to stop the contractions. I was sent home on bedrest but only made it 10 days. Finally, at 26 weeks, I went in and they did an emergency C-section.” Each baby boy only weighed two pounds apiece, about the weight of a head of cauliflower. Baby Jack was on a ventilator for a month and little Will for a week. “It was the biggest roller coaster of my life, navigating and living through the NICU,” Katie recalls. “Luckily my husband was in between jobs which was a blessing because he could be with me at the hospital around the clock.”

Katie and William would wake up and be at the Neonatal Intensive Care Unit (NICU) by the time the doctors made their rounds at 7 o’clock in the morning. The couple would come home to have dinner and go back say goodnight. When Katie would wake up to pump milk at 3 a.m., she would call to check on the twins. “There was very little privacy at the NICU. One pullout chair was next to our ventilators in a room full of others.”

After three months of this schedule, the boys were ready to come home. “That is when the craziness of life with twins started. Each of the twins had some hurdles to overcome, but with occupational therapy, physical therapy, and early intervention, we made huge strides.”

Shortly after the twins were born Katie was asked to be at the hospital again but in a different capacity. The Ronald McDonald House wanted Katie to serve on the board. She agreed to it and served for seven years, one of those years as president of the Friends of Ronald McDonald House. “It’s always been a place near and dear to our heart — having families find the comforts of home when they don’t have that where they are.”

As time passed, and although Katie’s life was full, she wanted to have a third child. She hesitated until she felt her twins were more independent. Once the boys reached the age of five, Katie became pregnant. But nearly halfway through the pregnancy, contractions started again. “My mom and I were on a trip to New York with the twins and I started having contractions at 18 weeks.” Immediately, the doctor placed Katie on bedrest. She was allowed to go to the bathroom and that was it. For four months, Katie lived this lifestyle. “I had contractions the whole time. I was depressed and sore and it was awful. But it worked and was worth it all.”

Around 36 weeks, Katie’s doctor said it was OK to move around. A day later, Katie went into labor. Matty was born Dec. 5. “He was the first baby I got to bring home with me after I delivered.”

A couple of years after having Matty, Katie was also asked to be on the board for the Friends of Brenner. “I am very excited about raising awareness and being involved with getting this new NICU in Brenner’s Hospital.” The NICU campaign involves raising $25 million to build a new NICU with 50 private rooms. Parents like Katie and William would have the privacy of their own room and a place to sleep. The small families would not have to hear multiple monitors beeping in one large busy room. Instead, the parents could provide the preemies with better parenting care in a less stressful environment.

Katie says she would not be able to do any of this without the support of family. “We are both fortunate to have both sets of parents who are extremely supportive of our family and the choices we make for our kids. I think God just provides you with the village that you need and putting the right people in your life at the right times. Looking back on all the hardship, I think it makes you a better person. It builds your character and gives you purpose to move forward.”

As a devout Christian, Katie says she gains a lot of strength from God and her Bible study friends. Her mom, Kathy Gibel, is also a shining force. “She is the most selfless person. She has always given so much of herself to make our lives as easy as possible or as functional as possible. She has been my pillar of strength. We probably talk three times a day.”

With such a loving mother, it is no surprise Katie has such a maternal spot for her family as well as the hospital. “I am going to be that lady one day who volunteers her time rocking babies in the NICU,” Katie laughs. “We have a puppy right now and I really want to make her a therapy dog so I can take her into the hospital. Somehow, I always keep finding my way back into the hospital.”

With her great bedside manner and compassionate personality, our neighbor seems like just the person anyone would want to see at the hospital. She, too, is someone who has been through similar experiences, withstood the blows, and still has a smile despite it all.

For more information about the new NICU campaign please go to, http://GiveToBrennerNICU.wakehealth.edu