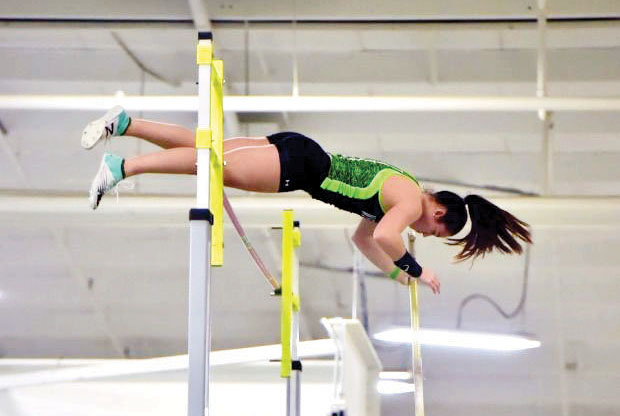 It was a banner day for four members of the West Forsyth indoor track and field team last Saturday during the NCHSAA 4-A state championship meet at JDL Fast Track.

The Titans swept their way to state titles in the shot put as Mason Ellis and Destiny Griffin both set new school records on their way to the top of the podium.

Lindsay Absher also had a record-setting performance in winning the girls pole vault, and junior Will Atkins claimed the 1,000-meter state title after entering the race with the top qualifying time in the state this season.

Overall, the boys team finished fourth and the girls finished fifth in the final tune-up before outdoor season begins for the spring.

For Absher, winning was a bit of redemption after finishing as the runner-up in the event last year. Clearing the bar at 13-feet, 6 inches established a new state record in the event and is the second-highest jump in the country.

“My game plan was to try and not be sick this year and to not get hurt,” said Absher, who competed in the state meet last year despite having a fever and suffering from flu-like symptoms. “I just did what I had been practicing and what I knew how to do. I wanted to focus on having some good jumps and stay consistent.”

“As soon as I hit the mat, I was shocked and just kept watching the bar to make sure it didn’t fall,” she said. “It was an amazing feeling.”

Absher, who has signed with Purdue, shattered the old meet record of 12 feet, 7 inches, and kept on plugging for the remainder of the competition, nearly clearing 13 feet, 8 inches on two occasions.

“This definitely gives me even more confidence heading into outdoor season,” said Absher, who on the 4-A outdoor state title last year after jumping 13-3. “I want to stay consistent with my 13-6 height and aim for 14 feet.”

Atkins, a junior, crossed the line in 2 minutes, 33.86 seconds to beat Pace Clark of Charlotte Providence, who finished in 2:34.38.

“It had been kind of back and forth for the whole race and I made my move with about 250 meters to go,” Atkins said. “I was in second place heading into the last lap and I passed the leader and held on from there. I kind of sensed that I had it with about 100 meters left. I have a lot of confidence in my kick and knew I just needed to keep on trucking and finish strong. Crossing that line and realizing that one of my dreams came true was just an awesome feeling. Nothing can really compare.”

Atkins said his strategy entering the race was simple: make the field beat him.

“I knew there was a really strong field in the 1000,” he said. “A lot of them had run the mile before the 1000, so I was going to push the pace and make them run my race. If they were going to beat me, they were going to have to beat me at running my race. This win gives me a lot of confidence heading into outdoor season.”

Griffin’s win on Saturday came as quite a surprise to the senior, who broke her own school record with a throw of 42 feet, 8 inches.

Griffin, who also stars on the basketball court, helped West to a 66-21 win last Friday night against Reynolds and then woke up Saturday morning to get a few warm-up throws in before competing later that afternoon.

“I’ve been so busy with basketball that I haven’t had much time to practice lately,” said Griffin, who signed to throw the shot put for East Carolina on Dec. 23. “I woke up Saturday morning and got a few throws in my yard before I went to JDL. I’m still surprised that it happened. I was only trying to throw a 40 (feet) and hopefully finish in the top three. I think I’ve only been to about three track practices all season.”

Griffin said she will take her achievement as a huge confidence builder heading into the spring season.

“I’m going to concentrate on basketball now until our season is over and then I’ll be ready for outdoor season, but definitely want to keep this momentum going once I do get going with it,” she said. “Now, this increases my goal for outdoor to throw a 45 (feet). I will work on getting stronger and getting my form better.”

Ellis, a junior, won with a throw of 60-feet, 3½ inches and said it was redemption for him after finishing in second place last year. His closest competitor had a throw of 53-9.

“I felt like I should have won it last year, so this is great to come out this year and win,” Ellis said. “Coming into this season, winning this was all I was thinking about. Being a state champion was my main goal. Winning this definitely puts me in a great position heading into the spring. Nothing will change for me. I’ll just keep doing the best that I can.”