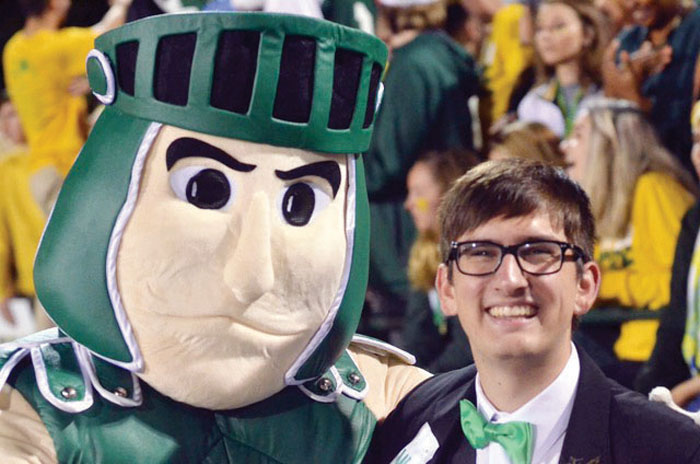 West Forsyth’s Pete Villasmil is president of the Student Government Association and is also the Titan mascot.

What happens when you combine being the mascot at your high school with being the president of the Student Government Association? Sounds like a riddle, but it is actually a description of Pedro (Pete) Villasmil, a senior at West Forsyth School. His school spirit for a place that means a lot to him as a student, along with his passion for leadership, have led to an interesting combination of accomplishments on Pete’s resumé.

At a young age, Pete recognized the significance of government in the lives of its citizens. This led to his first “political campaign” when he ran for student body president as a fifth grader at Southwest Elementary School. Given his background, he was able to give his campaign speech to the study body in both Spanish and English. This impressed his classmates to the extent that he won the election that launched an interest in politics and a succession of leadership positions throughout his school career.

One of the projects was the sponsorship of the Powder Puff football game this past fall. The junior girls at West competed against the senior girls while several boys served as cheerleaders. The entertaining event raised about $5,000 that was sent to communities in the eastern part of the state that were affected by the two hurricanes that hit the state in the fall.

Two successful SGA projects under Pete’s leadership included a food drive for the Clemmons Food Pantry and a coat drive for North Hills Elementary that resulted in a donation of 88 coats.

This past weekend, Pete participated in the Youth and Government state conference in Raleigh, a four-day event that gives high school students the opportunity to experience the workings of the state government. “This has been the highlight of my high school experience,” Pete said. “The people that I have met are so brilliant and open-minded. They are also some of the kindest people that I have met.”

Pete has participated in the Youth and Government program all four years of high school. “I will be in tears on the last day since this will be my last conference,” he said before planning to attend this year. There is an interesting family history with YAG as his grandfather who is 82 years old participated in this program as a youth.

This past summer, Pete expanded his interest in government when he served as a N.C. Senate page in Raleigh. “This experience to watch the legislative process in action was incredible,” he remarked. “It was an interesting summer to be involved because issues such as the voter ID law were being debated.”

Over the past two years, Pete has served on the Superintendent’s Student Advisory Council giving him the chance to work with Dr. Emory, and he has also had the opportunity to shadow former school superintendent Dr. Martin in his role as a county commissioner.

While Pete is proud of his accomplishments in leadership positions, a fun diversion has been his role as the Titan, the school mascot at West Forsyth. This involves exciting crowds at West football games and other school events. His career as a mascot actually began when Chick-fil-A hired him to be their cow mascot when he was only 14. “I was probably the only kid at my middle school to have a job at that time,” he said.

Regarding the interesting combination of being the Student Government Association president and the school mascot, Pete had this comment: “It’s like Bruce Wayne becoming Batman.”

Pete is also the co-editor of the Zephyr, the student newspaper at West. As a sophomore, he wrote an opinion article that won first place in the large school category from the North Carolina Scholastic Media Association. His article was a rebuttal to a story that he saw on the news about a teacher who advocated doing away with homework.

This past September, Pete was honored as Student of the Month by the Clemmons Rotary Club. This prestigious award was the culmination of his many successes at West Forsyth as well as his other accomplishments.

Pete’s academic schedule includes five advanced placement classes at West and the Career Center as well as his newspaper class at West. He considers his AP biology class at the Career Center with Sean Bennett to be a class that has prepared him well for college. “It is a dynamic class,” he remarked, “Mr. Bennett is an outstanding teacher.”

Pete’s mother Lori Timm is understandably very proud of her son and is especially amazed by how well he made the transition with the move to the United States at such a young age. “He gained U.S. citizenship because of me,” she noted, “but when he started first grade, he had not yet learned to read as the bilingual school he attended in Caracas did not teach reading in kindergarten.”

Having been born outside the United States, Pete was evaluated at the Newcomer Center and placed into the English as a Second Language program at Southwest Elementary. Thanks to the one-on-one tutoring, he was able to catch up to his peers’ reading level rather quickly. “It’s been an interesting transformation from not being able to read English to now writing for a newspaper,” he said.

Lori expressed how fortunate she is to have raised her two sons in the Clemmons area. Pete’s younger brother Andy is a junior at West, and Lori feels that both boys have had a terrific educational experience growing up here. “I am grateful that we landed in a community like Clemmons,” she said. “We have experienced great schools, dedicated teachers, and many opportunities not available in Venezuela.”

Not surprisingly, Pete’s career plans involve either government or journalism. He has been accepted to High Point University and to UNC — Chapel Hill where he has also been selected for the Honors Program and to the Media and Journalism School.   UNC is his first choice, but his mother noted that “we are in the ‘show me the money phase’” as scholarship possibilities and other financial aid offerings will be considered.

For a young man who was born in Caracas, Venezuela, Pete has already had a full life of many interesting experiences. He considers a visit back to his homeland in 2013 to be a transformational experience. “Seeing the transition in government there was significant. I witnessed everything from food shortages and power outages to civil unrest and protests. It was sad to see a place that you love falling apart. My experience returning home instilled my passion for public service. Not enough of us young people are involved in politics.”

At the age of 18, Pete is already on a path to influence the future of his generation in a positive way.