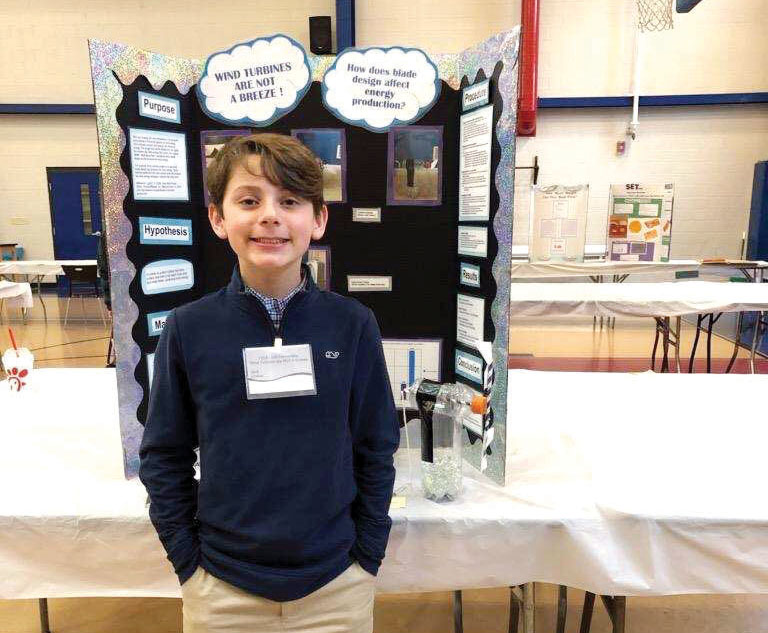 Jack Stieber recently won first place for his age group at the North Carolina Region 5 Science and Engineering Fair. His project was a wind turbine constructed from plastic bottles and straws to measure the efficiency of different blade shapes to generate the most energy.

Eleven-year old Jack Stieber can already take pride in a significant accomplishment. A fifth-grader at Southwest Elementary, Jack won first place for his age group at the North Carolina Region 5 Science and Engineering Fair on Feb. 16 in Greensboro.  This was a highly competitive event as students from 14 counties from the south-central part of the state were selected to participate.

Jack’s project was a wind turbine constructed from plastic bottles and straws, using index cards to make blades of various shapes. Using a box fan to power the turbines at different speeds, he measured how long it took for different blade shapes to pull a small weight on a string. The quicker the weight rose, the more efficient the blade design was at converting wind to energy. What he found was that the blade design had to be adapted to the wind speed to generate the most energy.

Regarding Jack’s success at the science fair, his mother Angie expressed pride at his first-place finish. “His dad and I are very proud of him,” she said. “This has been an incredible experience. We were not expecting this from a fairly simple project. He has learned so much from this experience, and I am especially proud of his maturity and how well he interviewed with the judges.” He was presented with a medal and a certificate for his first-place finish in the regional competition.

Jack has been enrolled in the HAG (Highly Academically Gifted) program at Southwest Elementary since the third grade. He will continue his studies next year as a HAG student at Hanes Middle School.

Angie expressed her appreciation for the education that her son has received at Southwest. She is grateful for the teachers and for role that the administration has played in his success.

When Jack was asked who has been his favorite teacher, he was hesitant to identify just one because he feels that so many of his teachers have had a positive influence on him. He mentioned that Amy Tilley who taught him in the third grade has been one of his favorite teachers. She taught him various subjects and Angie remarked that “she’s tough, but he has really learned to appreciate what she taught him.”

Jack’s favorite class this year is his math and science class that is taught by Tonya Grisette. “We’ve done some fun things in class, especially when we learned about atoms and molecules,” he said. He remarked that the enjoys all of his classes, but that science is something that he especially enjoys. “I think science is cool to me,” he said.

“He likes to take things apart,” his mother remarked. “He is really good at thinking outside the box.”

Summer Jackson is the principal at Southwest Elementary. She is proud of how Jack has represented the school with the success of his science project and with how he conducts himself as a student. “Jack is a very good example of what it is to be a Southwest Owl,” she said. “We are proud of the work that he has put into his science project. He has shown others that hard work pays off, and I know he will represent us well at his state competition. He is a really good kid who gets along well with his peers as well as the staff in the building. He is a very good example of what we want our students to be when they leave us.”

As a result of his top three finish in his age division in the regional competition, Jack will be competing in the N.C. Science Fair in Raleigh on March 29 and 30. His family and friends are wishing him the best as he competes in this prestigious statewide event.

Your Neighbor: Do unto others: Richard Budd believes in…