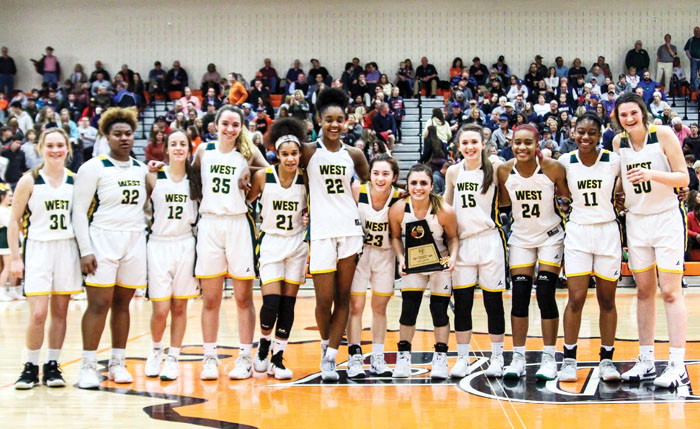 4-A state playoffs begin Thursday for Titans, the No. 2 seed in the West

The Titans trailed 33-24 entering the fourth quarter but clawed their way back and sent the game to overtime on Callie Scheier’s 3-pointer with 1:10 left in regulation.

Scheier, who finished with a game-high 34 points, also made the game-winning layup in overtime with 24.5 seconds left.

“After the third quarter, we talked about making sure we kept digging,” Coach Brittany Cox said. “I can’t remember a situation recently where we’ve had to dig that much late in the game. We just needed to make sure we had the right defensive adjustments and rotations. We wanted to keep our pressure on and make sure we were being smart. Our defensive pressure is what kept us in the game, because we weren’t making the shots we normally do. We just needed to keep being confident in what we were trying to do.”

It took plenty of skill and a little bit of luck for the Titans to overcome their nine-point deficit. West was also called for a foul near the end of regulation, and even though Glenn was in the one-and-one, it was a player control foul and no free throws were taken.

“We put one of our 6-2 freshman on the ball on the out-of-bounds play at the end of regulation and she got a tip, and that was huge,” Cox said. “That carried us into overtime, and I think once we got there, we just took a deep breath.”

It was the second such exhale of the night for the Titans. Senior Destiny Griffin injured her hamstring late in the fourth quarter and her return to the floor was doubtful.

“She told me she heard something pop and it had been bothering her leading up to the game,” Cox said. “I told her she needed to go and see a trainer. Her health was a lot more important at that point, but she didn’t want to come out of the game. That’s how much she wanted to be there for her teammates.”

Griffin was able to return during the overtime and Scheier came up big again when it mattered most.

“Originally, I was going to hold it for one shot,” Cox said. “After I drew it up, I just looked at Callie, and she had this look in her eyes, and I just said to her ‘you know what? Just go for it.’ And that’s what she did.”

Cox said the last 25 seconds were grueling, but that her team was prepared to stop the Bobcats because of a drill they have been working on in practice.

“We call it the ’30-second drill’ and it means that you have to play defense for 30 seconds without letting the other team score, get an offensive rebound, or fouling them,” Cox said. “And after Callie made that go-ahead layup, that’s almost exactly the situation we were in. And we were ready for it.”

Cox praised the efforts of Scheier and Griffin, two seniors who have been in the program since Cox started coaching at West four seasons ago.

“I don’t think either one of them was planning on leaving that gym Friday night with anything other than a win,” Cox said. “It says a lot about them and what they are willing to put on the line for us to win that game. The biggest thing they can give to their teammates is their hearts, and that’s what they did against Glenn and it carried us through.”

The Titans picked up the No. 2 overall seed in the West for the NCHSAA 4-A state tournament that will begin this week.

West received a bye for the first round and will play the winner of the Mint Hill Rocky River/East Forsyth game, which was played on Tuesday, at home on Thursday.

“It’s survive and advance time now and we have a few days to focus on what we need to do to be successful,” Cox said.