After the Final Bell: Bright future: West sophomore is an Eagle Scout and a top athlete 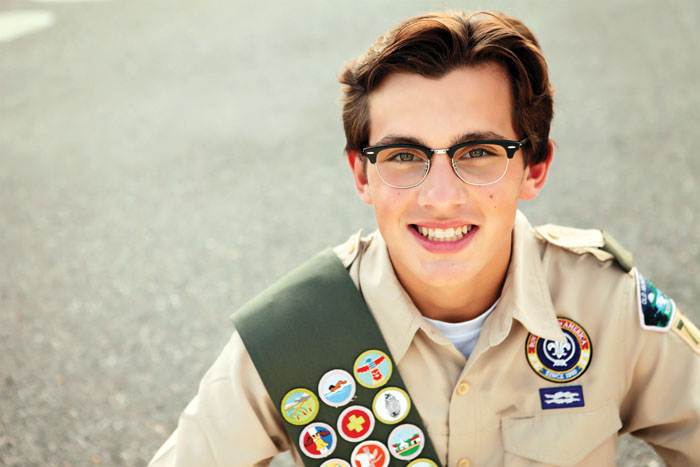 It is quite an accomplishment to achieve the rank of Eagle Scout. It is even more impressive to earn this award at the age of 16. Jeremy Eldredge, a sophomore at West Forsyth, completed the requirements for the Eagle Scout rank this past January soon after his 16th birthday. His service project was a painting of a large map of the United States on the parking lot at Morgan Elementary School where he once attended as a student.

A friend of Eldredge, who is in his scout troop, painted a similar map at Lewisville Elementary. Following up on his friend’s idea, Eldredge painted a 10-foot-by-20-foot U.S. map for the campus at Morgan this past November. He was helped with the project by Chris Daudelin, who works for Cactx Surfaces, a paving company in Winston-Salem. Daudelin not only helped Eldredge with the project, but he has also provided the paint.

In addition to the painting project, Eldredge put in many hours of work to earn his Eagle Scout rank. “I did lots of camping, cooking, first aid, and community service,” he said commenting on the rigorous expectations that go along with earning the highest award in scouting.

While scouting has been a major part of this life, Eldredge is also quite successful as a student and as an athlete. He is already enrolled as a tenth grader in two advanced placement classes, AP environmental science, and AP human geography. His mother Janell proudly noted that he makes straight A’s, and she indicated that he intends to continue to take AP classes in his last two years of high school.

Eldredge has been a competitive swimmer and runner for much of his life After swimming for six years for club teams, he felt that he could be more successful as a runner. He competes for the cross-country and indoor and outdoor track teams at West, and his decision to compete in those sports has proven to be a good one.

As one of the top runners for the West Forsyth cross-country team, Jeremy helped to lead the team to a first-place finish in the regional meet this past fall and to an eighth-place finish a few weeks later in the NCHSAA 4-A state championship meet in Kernersville.

His best time in the 5K is an impressive 17:00, and his best time in the mile is 4:55. Both are amazing times for a sophomore, and Jeremy is hoping to shave a minute off of his best 5K time. This would put him at an elite level as a high school distance runner that would likely draw the attention of cross-country programs at the college level.

His inspiration to become a competitive runner comes partly from his parents. His father Todd and his mother Janell are dedicated runners, and they both have both completed marathons and half-marathons.

Eldredge acknowledged that the discipline that is required to compete in track and cross-country carries over to the classroom. “Running is hard, and practices are difficult,” he said. “School is also hard and there is a lot of preparation to be successful.”

Eldredge has already decided on either Stanford University or Brigham Young University as his top two college choices after he graduates from high school. His older sister Megan is a student at the Brigham Young campus in Hawaii. Unlike most students, he has been thinking about college since a young age. “He started talking about this when he was five,” his mother said.

Janell indicated that she and her husband are both very proud of their son’s success and accomplishments. “His dad and I couldn’t be more proud of his determination and hard work that he put into accomplishing his goals to this point. We’re excited to see what the next several years have in store for him as he continues to work hard to set and achieve new goals.”