Play ball: Boys of summer ready for the spring 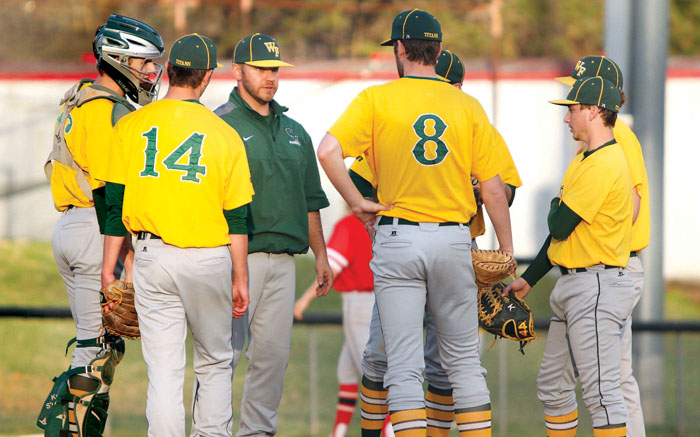 West Forsyth is ready for an exciting baseball season

The West Forsyth baseball team has plenty of reason for optimism this season. After advancing to the final eight in the NCHSAA 4-A state playoffs last season before being eliminated for Charlotte Ardrey Kell, the Titans are ready to take another leap forward.

Coach Brad Bullard, who is entering his sixth season as the Titans’ coach, will rely heavily on a talented crop of nine seniors — four of whom have already signed or committed to play college baseball — with several others drawing plenty of interest.

“That is where it will all start for us,” said Bullard, whose team won two of its first three games to open the season. “They’ve all done a great job in the offseason of being great leaders. We have a lot of returning players who played a lot of varsity innings last year. I think a lot of people were surprised we made it as far as we did, or that we were maybe one year away from reaching that kind of success. Now we’ll see if we can keep moving forward.”

The Titans finished 23-7 overall and 5-5 in the Central Piedmont 4-A Conference, good enough for third place.

“We won our first-round playoff game last year over Charlotte Olympic by the 10-run rule and their coach told me how shocked he was that we finished 5-5 and third in our league,” Bullard said. “Three teams in the conference made it to at least the final eight, with East Forsyth losing in the regional championship. That goes to show how strong of a league we have. It’s a killer conference.”

Bullard said that Reagan, East Forsyth, and Davie County will return plenty of horses this season, with Glenn returning eight of its nine starters.

“And Reynolds always puts out some quality teams, so again, the league will be loaded this season,” Bullard said. “Reagan was the top-ranked team in the state in the preseason so we know we will earn all our conference wins when we get them.”

Bullard said the Titans have a lot of team speed this season, which he plans to utilize as a weapon, strong pitching, and solid defense — all part of the formula for success.

“We plan to use a two-base offense when we are on the base paths,” Bullard said. “The mentality we want our players to have is one of going from home to second on a hit, first to third, and second to home. We know our speed is a strength and we want to create as much havoc as possible.”

Defensively, the Titans are strong up the middle with the catching tandem of senior Brendan Cuthrell, who has signed with Guilford, and sophomore Banks Cox, Both are expected to split time behind the dish. Shortstop Peyton Idol, who has signed to play at Appalachian State, is another force, and senior centerfielder Scout Cox, Banks’ brother, was an all-state selection last season and has enjoyed back-to-back all-conference recognitions.

“We’ve got eight solid arms we have a lot of confidence in that we can run out there on the mound,” Bullard said. “One of those, Connor Monroe (who has committed to N.C. State), is coming off Tommy John surgery and won’t be available until April or so. Peyton Brown (a 6-foot-10 junior) is coming off an all-conference season last year as well and can really pound the strike zone. We also have several talented guys who we expect will be key for us in relief roles.”

“I’m excited about what we have the potential to do, especially if they swing their bats like they did last year,” Bullard said.