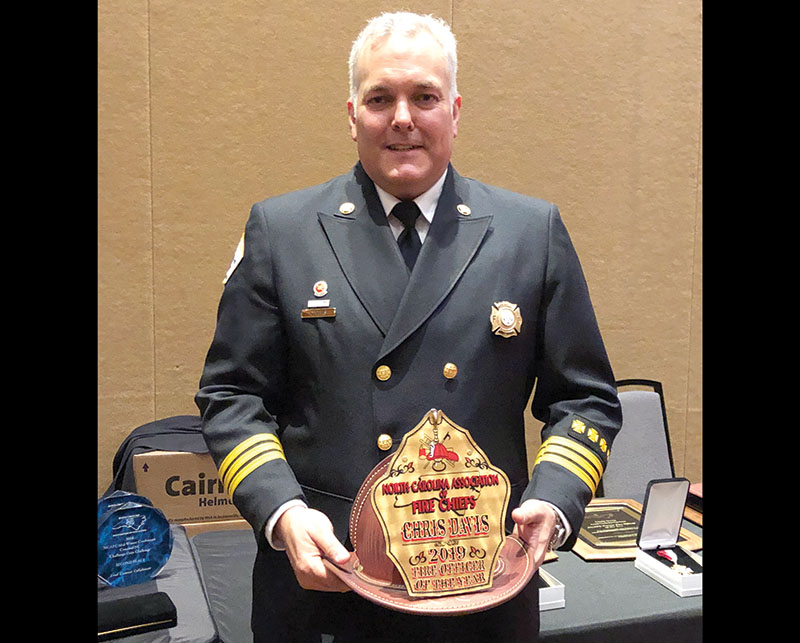 Firefighter Chris Davis of Forsyth County has been named N.C. Firefighter of the Year

Chris Davis knew soon after graduating from high school that he was destined to become a career firefighter. His career that has spanned 36 years began when he served as a volunteer for the Clemmons Fire Department in 1983. He had considered working on his family’s dairy farm after high school, but the family business was sold, and he enrolled in a machinist program at Forsyth Tech.

After serving as a volunteer in the Clemmons Fire Department for several years, he began working as a career firefighter for Forsyth County in 1991. He has worked for the county for his entire professional career. In addition to taking classes at Forsyth Tech, he furthered his education by earning an associate’s degree in fire protection from Guilford Tech and a bachelor’s degree in fire safety engineering from the University of Cincinnati.

Gary Styers, who is the fire marshal for Forsyth County, nominated Davis for the award that is based on service that is “above and beyond” the commitment of being a fire officer. The award included a helmet, a plaque, and a pin that Davis will proudly wear on his uniform. Davis is honored by the recognition that he has received, and he stated “I’m sure that there are many other fire officers who are deserving of this,” he said. “I’m humbled to receive this award.”

Jerry Brooks, the fire chief for the village of Clemmons, has been a guiding force and mentor for Davis throughout his career.  “He has been a part of this organization since he was 14 years old,” Brooks said. “He started in the junior program with the Explorer’s Post at a very young age.”

Davis is grateful for the guidance that Brooks has provided. “Jerry has been my fire service mentor,” he said. “He has guided me throughout my career. He has literally seen me grow up in the fire service. The relationship has come full circle as Davis now serves as the assistant chief under Brooks.

Brooks noted that Davis has had a significant role in training other firefighters. “He’s been one of the best instructors in the state for many years,” Brooks said. Speaking of the character of the man who he has mentored for decades, he added, “Chris is an all-around good person. He is very quiet, but he has always had a good vision of what he wants to accomplish.”

The fire chief also mentioned that Davis will become the president of the State Firefighters Association in a few years, a position that Brooks held in 1989-90. “To have two firefighters from the same small community like Clemmons representing the state is quite impressive,” he said.

When asked about what is most gratifying about his career, Davis spoke about the human aspect of his work. “Helping people and giving service to the community is what is important,” he said. “It is about developing relationships. Someone else’s bad day is a firefighter’s best day when we are able to help someone deal with tragedy. We are on the front end of things giving folks a little bit of direction during a difficult time.”

He indicated that Clemmons has always been his home, and that he has seen many changes in the growth of the area. “I am old enough to remember where there were farms that are now housing developments.” he said.

Our growing community is fortunate to be served by the firefighters who serve our village and county. Chris Davis exemplifies that commitment, and he is most deserving for the recognition that he received last month as the North Carolina Career Firefighter of the Year.