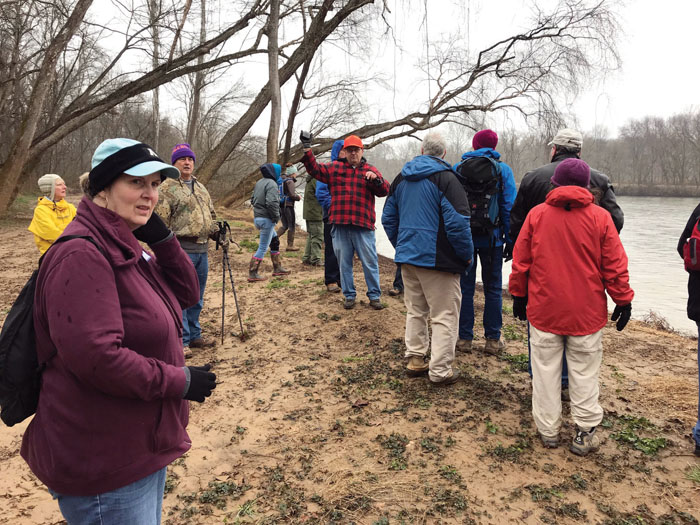 During the days of Daniel Boone and beyond, the Shallow Ford crossing of the Yadkin River held historical significance as a link in the Great Wagon Road and the site of the Battle of Shallow Ford when the Patriots and Loyalists clashed on Oct. 14, 1780.

It also was where a group of explorers met last Saturday morning along the muddy banks of the Yadkin on a cold, damp day to walk in the footsteps of the pioneers as part of the Shallow Ford Walk. The event, which is held every other year in March and has been going on since the early 1990s, was co-sponsored by the Lewisville Historical Society and the Yadkin County Historical Society.

Along with the history itself, including this day of viewing the Shallow Ford from both sides of the river, locating trails and markers, and touring the battle site, a new initiative is currently underway to preserve a large tract of land in Forsyth County that borders the Shallow Ford.

“The hope is that the significant history of this part of North Carolina can be preserved and promoted by providing public access,” Kelly said. “It’s a great location for public walking paths, camping, fishing, boating, etc., and is nearby historic Lewisville, Huntsville and Daniel Boone’s homestead.”

During the Shallow Ford Walk last Saturday, the group located that marker placed by DAR more than 100 years ago on the Forsyth County side of the river in what was then the Salem to Shallow Ford Road but is now a ravine.

A similar marker was placed on the Yadkin County side of the river on Mulberry Fields Road, which leads toward where the Battle of Shallow Ford transpired, and includes the following inscription:

“Daniel Boone’s Trail from North Carolina to Kentucky – 1769, Marked by N.C. Daughters of the American Revolution.”

In the historic Revolutionary War Battle in 1780, the outmanned Patriot forces turned back the British Loyalists where some 500 men clashed and 16 died, including Capt. Henry Francis of the Whigs. He was buried on the battlefield, and his tombstone marks the spot. The dead Tories were buried in a mass grave at an unknown location.

Although some think that the Battle of Shallow Ford didn’t receive the attention it deserved, many consider it to be part of the turning point of the American Revolution coming exactly a week behind the Battle of Kings Mountain where these Patriot forces fought and prevailed for the freedoms we enjoy today.

This area was also the site of the Civil War skirmish, Stoneman’s Raid, in 1865 where Gen. George Stoneman’s Union troops crossed the Yadkin at the Shallow Ford.

The Shallow Ford, as it name implies, is a shallow section of the Yadkin River and was a major crossing of the Yadkin River through the 18th and 19th centuries. It is a natural rock formation that enabled animal crossings, including buffalo, for thousands of years.
It is the only crossing in Yadkin still in existence. It was once used by Indians to cross on foot and horseback and was as a crossing for the Great Wagon Road in the 1740s.

The Shallow Ford also served as a crossing by Gen. Charles Cornwallis and the British Army (about 5,000 men) in 1781.

For those 30 hardy souls who enjoyed the history lesson by going on the Shallow Ford Walk, the day started in the morning on the Yadkin side, followed by lunch (many ate at the nearby Battle Branch Café) and then trekking through the Forsyth side where half of the original group completed the entire walk.

They left knowing the significance of the land they had covered in their mud-caked shoes and boots.

As Andrew Mackie of the Yadkin County Historical Society and emcee for the event said of the importance of those early days, “This was the gateway to the West. We had a period of American history called the ‘The Great Western Expansion.’ And it all happened because they had to cross the river at the Shallow Road to get out West.”