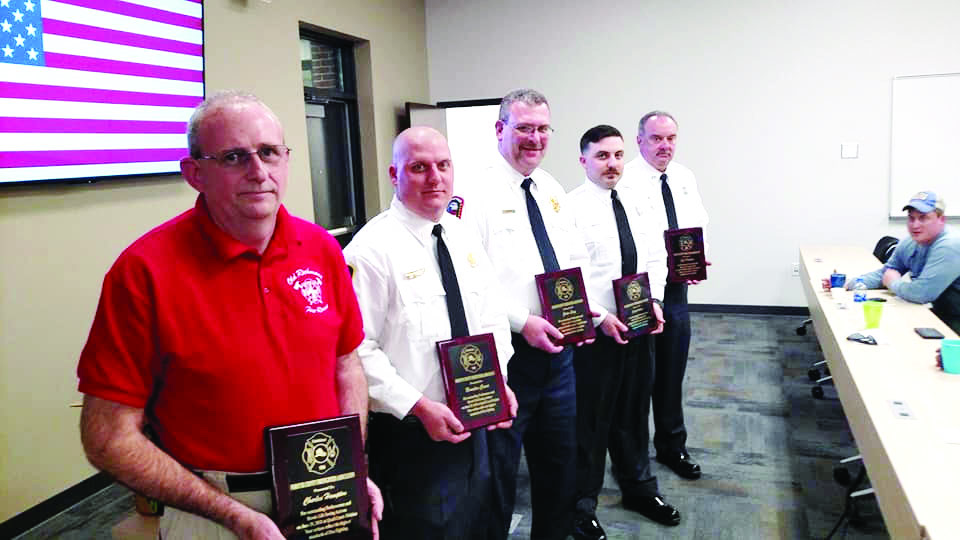 The Forsyth County Firefighters Association honored local firefighters at an annual awards ceremony on March 12, including five firefighters who helped rescue a man from a burning house.

The Fire Life Saving Award was given to five firefighters who responded to a residential fire alarm on Quail Creek Drive in Pfafftown at 2:34 a.m. on June 29, 2018. The Vienna Volunteer  Fire Department (VFD) quickly arrived on the scene, along with Old Richmond, East Bend, Forbush and Lewisville VFDs with support from the Forsyth County Fire Department.

Firefighters worked to suppress the fire and rescued an unconscious man who was in the bedroom of the home. Life saving efforts were immediately initiated and Forsyth County Emergency Medical Services took him to the hospital, where he recovered. An investigation into the fire determined it was intentionally set and a woman living in the house was charged with arson and is currently in jail awaiting trial.

The recipients of the award were Charles Hampton of Rural Hall VFD who was working for Old Richmond VFD at the time, Jeff Heitman of Vienna VFD, Jesse Levy of Lewisville VFD, Brandon Crews of Vienna VFD and Scott Wiles of Vienna VFD.

Vienna Fire Chief Tim Lasley nominated the firefighters because they were involved in recognizing someone was in the house, rescuing the victim and resuscitating him.

“It took every one of us to do it, it was a combination effort, but these gentlemen went above and beyond their normal duties,” said Vienna Fire Chief Tim Lasley.

The other awards given out at the ceremony were:

• Rescue Member of the Year: Tim Flinn of Gumtree VFD

• Officer of the Year: Eric Stewart of Rural Hall VFD

• Rookie of the Year: Ben Perkins of City View VFD

• Instructor of the Year: Scottie Emerson of Rural Hall VFD

• Firefighter of the Year: Austin Flynt of Walkertown VFD