Your Neighbor: Love of community: Carol Blankenship passionate about giving back 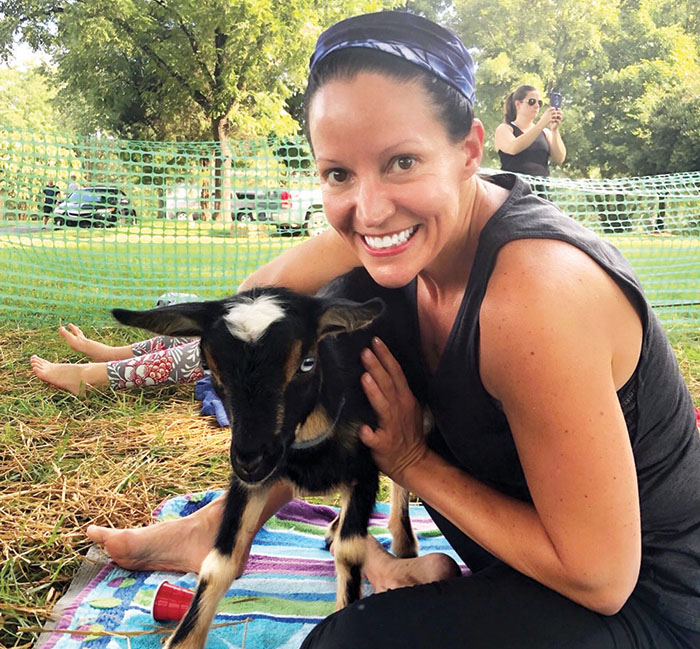 Carol Blankenship serves on the board of the Humane Society of Davie County.

Carol Blankenship is one of those people who demonstrates her love for our community by her many philanthropic commitments.

Born and raised in Lewisville, Carol enjoyed growing up in a place where she made life-long friends. While at West Forsyth High School, she relished choreographing the Titanides her junior year and cheerleading her senior. Her love for music went a step further. Carol was cast as Annie Oakley in the musical, “Annie Get Your Gun” and loved it. She continued her passion during college.

Although Carol enjoyed her time as a student and socially (Sigma Kappa) at UNC Charlotte, she also worked too. This go-getter attitude would help her get a job immediately upon graduation.

On a weekend break from college, Carol’s mom and one of her closest friends decided to set their daughter and son up on a date at Mi Pueblo. “We shut that place down. The rest is history. When you know, you know,” smiles Carol when talking about her now-husband Erik.

With a human resource management bachelor’s degree under her belt, Carol learned very quickly that human services was an underpaid field. “Unless you have a master’s or doctorate, I knew I wouldn’t be able to make much,” notes Carol. Her first job out of college was to promote new venues. Very quickly, Miller Brewing Company noticed her talents and offered her a position, which she accepted.

Carol and Erik had gotten married in November 2000. As the owner of EMA Resources, Inc., Erik’s business was headquartered in Mocksville. Carol’s work was keeping her in South Charlotte for 6 years at Autotrader. While commuting from Mooresville, they had purchased a lot of land at Lake Norman where they were going to build a home. “I woke up one morning and realized I wanted to go home. If I was going to have a family, I wanted to do it back there,” notes Carol. “We decided not to build at Lake Norman and cut a hole in the middle of the woods in Davie County and called it home ever since.”

Two years after finishing their new home, Erik and Carol welcomed Ben in 2004. Carol and Erik decided that she would stay home while he was a baby. Two years after Ben was born, Carol felt compelled to assist her community. Approached to help Guardian ad Litem (GAL), Carol was a trained volunteer appointed with a GAL attorney, by a district court judge to investigate and determine the needs of abused and neglected children. These children were petitioned into the court system by the Department of Social Services. In North Carolina alone, more than 18,000 children needed help each year. “It really opened my eyes to what was going on in the community,” reflects Carol.

Carol and Erik’s second son, Hank, was born in 2008. Carol had decided to step back from her role as a GAL advocate. She did not stop her philanthropic efforts and was voted into the Parent Teacher Association at Pinebrook Elementary. As the fundraising coordinator, they were able to procure a new gym floor in two years. Carol also coached Go Out For a Run (GO FAR). “I love how it introduces kids to health and wellness and to a sport they don’t know,” describes Carol. “We would incorporate weekly lessons of good morals and values. You train for eight weeks and participate in a 5k which is tied to the community.” Carol jokes that even she didn’t start running until she was 35. “My longtime friend Megan Brown convinced me to do it. It took me two months to run two miles.” Now the friends share a passion for relay races and have done more than they can count.

For the past three years, Carol got back into a more regular part-time job. She works at Hip Chics in Clemmons and loves it. If not at Hip Chics, you can find Carol giving back to animals in need. Carol serves on the board for the Humane Society of Davie County. She utilizes her promotional skills for a great cause. She is currently chairing one of its major fundraisers, Woofstock, which will be from 6-10:30 p.m. on Aug. 17 at RayLen Vineyards. The Humane Society of Davie County does not receive government funding and relies strictly on grants and private donations. The funds raised from this event provide financial support for spay/neuter clinics, care for the animals, and effectively lowered the euthanasia rate to 18 percent, one of the lowest in the state.

As Ben Franklin said, “It is prodigious the quantity of good that may be done by one man, if he will make a business of it.” Our neighbor, Carol has done just that.