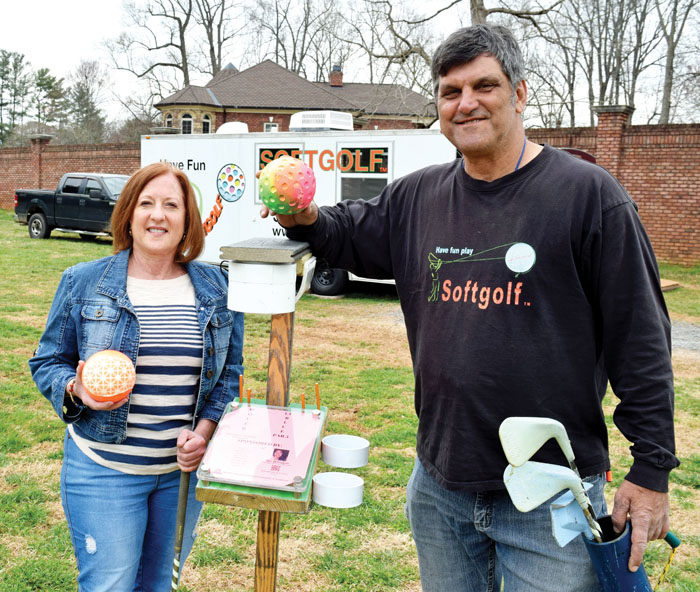 What would be the best-ever improvement to the game of golf?

How about a bigger hole?

And even better, how about a bigger ball?

If this sounds like something that would improve your next round of golf, then you might want to consider heading over to Tanglewood Park and the new Softgolf course located adjacent to the dog park.

“This is golf anytime you like, day or night,” explained Ray Baldorossi and partner Carolyn Bennett-Sullivan. Softgolf is their business and the Tanglewood course is open from 10 a.m. to 10 p.m., weather permitting.

What makes the game so entertaining isn’t just the larger ball and holes, it’s also the fact that at night, the balls are illuminated, as are the large numbered balls that sit atop each of the flag sticks — each a different color.

“It really looks great at night when everything is lit,” Baldorossi said, but added, it’s just as much fun during the day.”

The game originated with Baldorossi’s father, a mechanical engineer who worked in the field of aeronautics. “I was hitting a ball around the backyard with a golf club one day and there was a rubber ball a little bigger than a softball, sitting in the grass. I decided to take a swing at it and my dad happened to be there at the time. He watched the way it flew across the yard and got the idea of a game with an oversized ‘golf’ ball.”

Several years later, after considerable work, his father had five patents on the game, and from 1979 to 1988 there was a Softgolf course in their home town of Delran, N.J.

Since then, there have been courses in other places and there is a chapter for Softgolf in the Stand Up and Play foundation. Last year, Baldorossi and Bennett-Sullivan were allowed a week-long trial at Tanglewood to see how much interest the game might draw.

“We had more than 60 people fill out surveys and for the most part the rates were all fives,” Bennett-Sullivan said. “Everyone who played loved it and we received great feedback.”

Prior to locating at Tanglewood, the couple had been looking around the Triad and were considering the site of an abandoned driving range. “I decided to get in touch with the county to see if they knew of other possibilities,” Baldorossi said. “We visited several parks, but the first didn’t have enough room and the second was too hilly for this game.”

It was then someone suggested Tanglewood Park. “We were given a number of reasons why this wouldn’t work, but in the end, it did. You need 12 acres for an 18-hole course and six for a nine-hole course.”  The Tanglewood site has six and a half acres so it was perfect.

Softgolf is a full-swing golf game played with three clubs — one is comparable to a three iron, the second is comparable to an eight iron and then a putter. The ball is four and three-eighth inches and each hole has a diameter of 12-inches. Baldorossi makes all of the equipment himself, and said he’s recently made improvements to the ball.

Another recent improvement was using solar power for the after-dark lighting.

Both Baldorossi and Bennett-Sullivan said their enjoyment comes from watching how much fun people have playing the game. “It’s the perfect way to spend time outdoors with family or friends,” she noted, adding that in these busy days, it’s important for people to get outside and focus on being in the moment. “It’s a great stress reliever while also being fun.”

A local business recently had a team-building event at the Softgolf course. “We tailored the event to meet their goals and it turned out to be a great event,” Baldorossi said. “We added other activities and it went very well. We hope it’s something we can do more of in the future.”

The best way to find out if the course is open is to visit their website www.softgolf.net. You can make reservations and pay online as well. The cost is $12 per person for a nine-hole round.

“The best score we’ve had so far was a 27,” Baldorossi said. “I had a 30 the other day, but don’t get to play as much now because we’re busy trying to draw interest and work on marketing the game. So far it’s been a big hit and people who try it out are usually back again. We hope the Softgolf course will be soon be a popular recreational destination for local residents.

“The folks at Tanglewood seem very pleased with this addition to the amenities here at the park and we love the location, Baldorossi added. “So come out and play a round and then be sure and tell your friends.”