Your Neighbor: Family man: Probation officer Mark Reinhardt wants to make a difference in the community 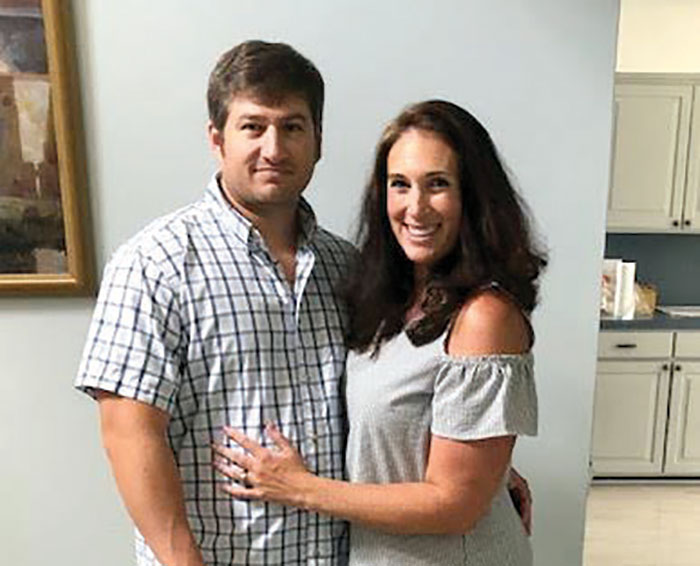 Mark Reinhardt and his wife, Laura

Mark Reinhardt grew up knowing he had an interest in law enforcement. A self-professed “country boy,” he had considered various other professions that all involved health and wellness.

Having grown up the majority of his life in Yadkin County, Mark was the oldest of three children in his family. “We grew up riding our bicycles, playing basketball, and other sports, “remembers Mark. After his high school graduation, he went to Surry Community College. “At that point, I hadn’t decided for certain which direction I planned to take my career,” recalls Mark. He worked at UNIFI in Yadkinville with a couple of his friends. After several years, he realized it was time to go back to school. “I went to school two nights a week through GOAL — the degree completion program at Gardner-Webb University,” mentions Mark. “It’s a program for adults with jobs wanting to get their degree.” For two consecutive years, Mark took classes and worked to graduate with a bachelor’s degree.

While in school, Mark had taken on a new job that involved helping those with mental illnesses. “I would take patients to appointments that had schizophrenia and bipolar disorder, and help them while they were receiving treatment,” recalls Mark. “That job would actually prepare me for the one that I have now.” Jobs weren’t the only change Mark had during this time in his life. He met his future wife, Laura. “I knew pretty quickly,” reflects a nostalgic Mark. After four months to the day they met, Mark proposed to Laura. Mark doesn’t hesitate to say about his wife, “She’s really the best thing ever to happen to me.”

His new wife would bring him to the Winston-Salem area once they got engaged. Mark had decided for certain he wanted to be a probation officer. “It actually took me awhile to get the job,” explains Mark. “I finally got lucky in Guilford County and they had me working in High Point for a couple of years.” After those two years were up, Mark was offered an officer position where he had grown up in Yadkin County. Mark says what he likes best is, “I feel like I’m really making a difference. It’s not just about locking people up. It’s building a rapport with them, trying to make a difference, and holding them accountable.”

Mark doesn’t let the stress of his work affect his home life. Father to fifth-grader Nadia, kindergartner Slate, and step-dad to high school junior Sage, he enjoys decompressing with his family. You also can find him at the gym. “I actually had thought about opening a gym,” mentions Mark. “That probably won’t happen at this point in my life, but I do enjoy fitness greatly.”

Our neighbor truly embraces as his No. 1 focus — his family. As Lee Iacocca astutely stated, “The only rock I know that stays steady, the only institution I know that works, is the family.”

Your Neighbor: Love of community: Carol Blankenship passionate about…