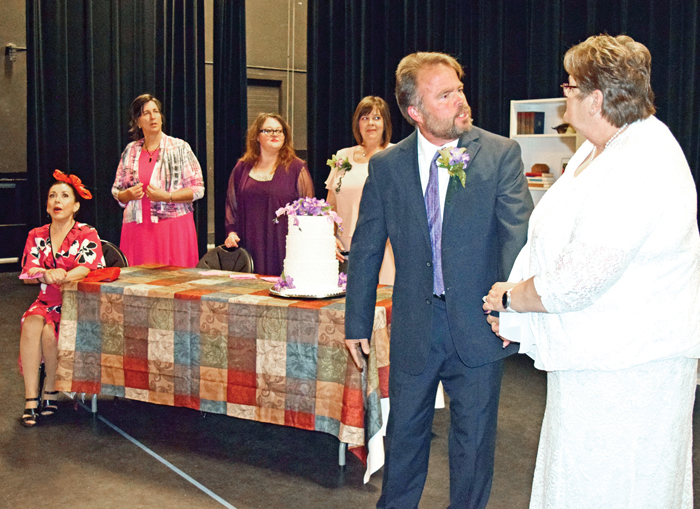 Love is in the air over at Harmony Church and the ladies in charge of the funeral committee are having to shift gears as they now must plan a surprise wedding shower for their good friend Leah.

Leah, who never married, has been on an internet search and has located her old high school boyfriend. Following an exchange of letters and emails, love has been rekindled and Howard Chaney has returned. If nothing goes wrong, Howard and Leah will exchange vows next Saturday, but since this is a “southern comedy,” things will of course go hilariously wrong — starting with a rehearsal dinner at the local Mexican food restaurant.

While Leah and Howard are the intended bride and groom, theirs isn’t the only romance blossoming in the church fellowship hall. Maud, head of the funeral committee at Harmony Church, and the church janitor, Russell, seem to be discovering a mutual attraction as well.

This zany cast of characters — from the wisecracking Grace who can’t find a dress for the wedding to “scatterbrained” Addie who thinks she was a princess in an early reincarnation to Marilyn who isn’t sure she’ll ever get the hang of being a proper pastor’s wife, the laughter keeps coming. And just when everyone needs Russell’s “special blend of coffee,” he’s changed the recipe.

Philip Powell is directing his first show at the Brock, and Lynn Hall is returning as assistant director/stage manager. The cast includes Robin Ball as “Maud,” Carlton Terry as “Russell,” Lynn Vogler as “Leah,” Mike Stegall as “Howard,” Lana Mitchell as “Addie,” Dee Matthews as “Grace,” Shannon Grimes as “Marilyn” and Tom Mitchell as “Pastor Bob.”

“It’s a fun show and the cast members have worked very hard to find the heart of the comedy,” Powell said. “I think the audience will appreciate their hard work and enjoy the show.”

Tickets are available by visiting www.daviearts.net or by calling the box office at 336-751-3000.