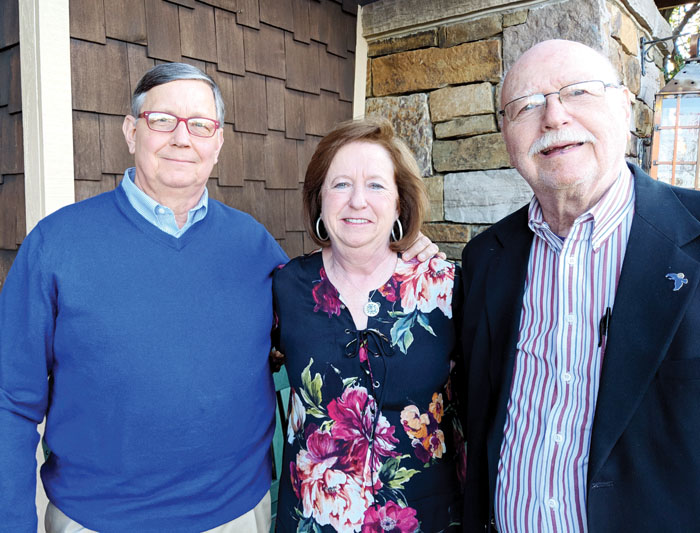 Danny and Becky Green, left, with John Stewart. Stewart has funded a high school scholarship in honor of the Greens, who are both music teachers.

One of the most gratifying aspects of being a teacher is knowing that you have had a lasting impact on students long after they have left your classroom. Danny and Becky Green, two career music teachers, have had such an impact on hundreds of their students during their careers that have spanned decades. In recognition of their legendary careers, the married couple from Clemmons will have a new scholarship named after them.

The Rebecca and Danny Green Music Scholarship will be awarded for the first time in May to a West Forsyth senior. It has been funded by John Stewart, a local philanthropist and retired nuclear engineer, who has been involved with music for most of his life. The $1,500 award is not restricted to a student who plans to major in music, but it will be given to a student who has had a successful career as a music student at West. Sandi Scannelli, president and CEO of the Clemmons Community Foundation, will be presenting the inaugural scholarship at the school’s award ceremony on May 22. Danny and Becky have been asked to attend.

Both Danny and Becky have taught for 39 years including the current school year. Both of them also “unretired” after meeting the state requirements to retire several years ago. Becky retired in 2009 and Danny retired in 2013. Their time away from the classroom was short-lived for both of them, and they eagerly returned to their passion of working with young people.

Danny’s music career began when he played for the U.S. Army band. “My lottery number for the draft was 10,” he said, “but I did have the opportunity while serving during the Vietnam War to play in the Army band.” His teaching career after serving in the military career has included teaching in Virginia and four counties in North Carolina. He has taught for most of his career in five high schools and six middle schools in Forsyth County. He currently teaches at Wiley Middle School. He has taught both band and orchestra from third graders to college students.

Both teachers have been recognized for various honors and awards. Danny has been honored as Band Director of the Year for Forsyth County. He also received the Silver Baton Award from Appalachian State, and the Music Educator of the Year Award from the North Carolina School of the Arts. For several years he chaired the Northwest District Junior High/Middle School Honors Band Clinic.

Becky has twice been selected as the Forsyth County Music Teacher of the Year and the Orchestra Teacher of the Year for the North Carolina Western Region. She also served as Chair of the Orchestra Section for the North Carolina Music Educators Association, a commitment of four years. For seven years, she co-chaired, with Danny, the Western Region Orchestra auditions. This year, 61 students in her orchestra at West were selected by audition as WSFCS All-County musicians.

The couple has also been inducted into the Mount Tabor High School Hall of Fame.

When asked what he is most proud of when reflecting on his teaching career, Danny mentioned a long run of student successes when he taught at Mount Tabor. “For 14 consecutive years, more students from Mount Tabor were selected for All Honors band ensembles that any other school in the county.”

He is also proud of his role as a community educator including starting the Wachovia Wind Ensemble 16 years ago in Clemmons. This group has served students from more than 30 schools in seven counties throughout Piedmont North Carolina.

Becky is particularly proud of the number of her former students who have pursued a career as music educators. “Motivating my students to become teachers in our state is something I am very proud of,” she said. “I know of several former students and student teachers who are now active leaders in the Orchestra Section of North Carolina.”

The couple shares many memories of their years working with students, but two that stand out are taking 300 students to Disney World to perform and taking about 200 students to Carnegie Hall where they were featured on stage at the historic hall in New York City.

The Disney World trips involved long bus rides with rambunctious music students from Clemmons Middle School, but Danny noted that “once they got there, we kept them safe, and the experience was rewarding and memorable.”

The performance at Carnegie Hall took place 20 years ago in March of 1999, and among Becky’s prized possessions is a framed photo of her and Danny outside of the iconic building with an announcement about the performance of their Mount Tabor students. “We actually changed clothes and got to hang out in the Maestro Suite,” Danny recalled.

When John Stewart saw an opportunity to fund a scholarship for a music student, he was excited about this chance to make a difference in a student’s future. Although his career path involved engineering, he has sung in several church choirs, and he has played the alto horn in various Moravian bands. He has also served on the Board of the Piedmont Chamber Singers.

When he heard about the Greens, it seemed only fitting to name the scholarship after them. “I’m a Rotarian,” he said. “I’ve done most of my giving through them for international causes, but I wanted to see if there was a need for a scholarship locally.” After consulting with Scannelli, a plan developed to fund the scholarship and name it after the Greens.

This “teacher’s edition” of After the Final Bell celebrates the careers of two highly successful and dedicated teachers who have spent countless hours working with their students both in the classroom and after school. It is most deserving that a scholarship has been named to honor both of them.