Back on track: King looking forward to taking the reins at West 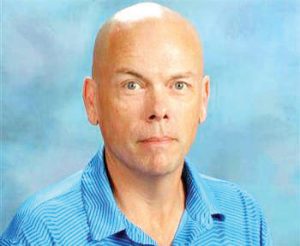 Kevin King, the new boys’ basketball coach at West Forsyth, has plenty of fond memories of the many wins that teams he has helped coach over the years at Simpson Gymnasium have picked up.

He also has the stinging memories of the painful losses.

His favorite memory, however, probably came as a player.

“I made my first 3-pointer in a game against West Forsyth in this gym,” King said with a laugh. “It was a scrimmage game and it was the first year they had the 3-point line in high school, which was my senior year in 1987 at North Surry. My very first points of my senior year came from behind the 3-point line. I still know exactly where the spot is that I made it from.”

King also hopes to leave his mark on the program at West, which struggled to 4-20 record last season (2-8 in Central Piedmont 4-A Conference play) under Howard West, who resigned after one season.

King, who previously coached with West as an assistant at Reynolds — when the team won three straight NCHSAA 4-A state titles from 2000-02 — and at Reagan for a total of 13 years, looks forward to getting the Titans back on the right track.

“There have definitely been a couple of down years and it might take a little while to get back to the point where we can be really good, but I know with what is coming back next year, there is no reason we cannot compete night in and night out,” King said. “We aren’t going to be far off. We had some talented sophomores on the JV team and with the juniors we have coming back, in addition to the two freshman we had playing varsity last season, we will be in good shape.”

Last season was King’s first as an assistant with the Titans after spending the previous five years at his alma mater, North Surry, where he played under his father, Ron, before graduating in 1988.

King compiled a record of 88-47 during his tenure at North, which included guiding the Greyhounds to the 2-A state championship game in 2017 before coming up short.

King said that he loved coaching at his alma mater but that the 55-mile commute, each way on a daily basis, eventually got to be too much.

“I loved being at North Surry because I was at home and I got to coach with my dad,” King said. “I also had a great run of players come through while I was there. But I’ve lived in Clemmons for about 20 years now and this is home. It’s a great community and the opportunity was one that I found to be very appealing. The opportunity here is fantastic. The community is so supportive and wants to see you do well. I’ll be 49 in a couple of weeks and I’m kind of on the back-end of my coaching career, so I’m more towards the end than I am the beginning. My family is settled here in Clemmons and West is just a great place to teach and coach.”

“I’m looking forward to the challenge of getting the program back to where it needs to be,” King said. “I’ll add a few more wrinkles to what we were doing this season offensively. Defensively, we need to be a team that can press and trap in some capacity, be a little more aggressive up the floor. I think we started to figure all that out towards the end of the season because we were in a lot of close games. We lost to Davie by two (points) in the conference tournament semifinals. It just took us a while to get to the point where everyone was comfortable in the role they had. The effort was there. That was never the issue.”

King knows that life in the Central Piedmont 4-A Conference is also a challenge, one that he readily accepts and is ready to push his players to excel in.

“We were able to play with everyone this season, even had a lot of leads in the third and fourth quarter of games,” King said. “I think we are much closer to competing for a conference title than our record indicated this year. That’s got to be our first goal — start thinking about that. We have to put ourselves in a position to compete. We have enough talent coming back to put together some success.”