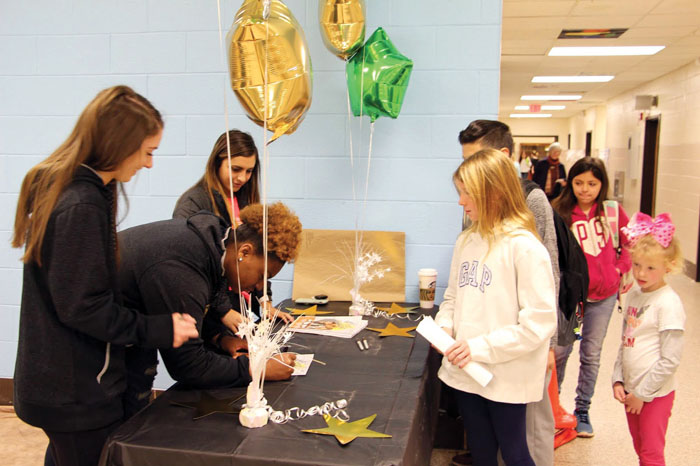 “I’m putting mine up above my bed,” said Thomas.

Wanting not only a signed poster but also a photo with the players, Thomas was among those waiting for West players Callie Scheier, Destiny Griffin and Brooke Schaffer to take a break from signing posters so they could have their picture taken with the students.

Scheier, Griffin and Schaffer are seniors on the West Forsyth team that won the N.C. High School Athletic Association Class 4-A in March.

Many of the students at Clemmons Elementary have been following the team, especially since Scheier and Coach Brittany Cox came over to the school in February after winning the regionals and appeared on the Hoop Talk segment of the school’s Parrot Talk show on YouTube.

After the girls won the state championship, Assistant Principal Ronnie Caviness invited Cox and the three seniors on the team to come visit with Clemmons students before school started on a recent Tuesday morning.

Coming to the elementary school before starting their day to West meant getting up early for Griffin and Schaffer. Scheier works out in the morning so she didn’t have to get up any earlier than usual.

In addition to being an assistant principal, Caviness is an artist, and he had created a poster featuring the girls. Initially, he printed 50 copies. Those were soon gone as students lined up to meet the players. Caviness printed another 60. As time approached for school to start, those, too, ran out. So the last few students got their autographs on blank sheets of paper.

“It was fun,” Griffin said afterward. “I never signed that many signatures.”

The other two also had big fun.

“It’s pretty cool to be a role model,” said Scheier. “And seeing the kids smile is fun.”

“The fact that they look up to us is really awesome,” Schaffer said.

One of those who had come to see them was fifth-grader Chris Gomez, who plays basketball with the CP3 Basketball Academy established by NBA All-Star Chris Paul. He met Scheir when she came over to Clemmons the first time, and she had given him a couple of valuable tips.

“Keep the ball close to you and dribble really low,” Chris said.

It was good to see her again and meet the others, he said, and he enjoyed following the team during the season.

“I like seeing them play,” he said. “They are so athletic.”

Fourth-grader Reese Chambra participates in Parrot Talk, and she brought along a poster that she had Scheier sign when she first came to the school. Since then, Reese has been having other players sign it when she goes to West games with her mother, Katie Chambra, the Health-Physical Education teacher at Clemmons, and the rest of her family.

So she was happy to be able to have Griffin and Schaffer add their signatures.

Reese said she definitely wants to play basketball at West one day.

Second-grader Jullian Bulauitan is a member of the Parrot Talk show team. He is amazingly knowledgeable about basketball in general, Caviness said. If you ever need questions answered not only about the West girls’ team but also about college and professional basketball teams, Jullian is your man.

The bedroom was definitely the consensus among those asked about their plans for their poster.

“I’m going to put it up in my room,” said third-grader Adriana McKoy and others when asked.

Fifth-grader Taylor Alderman was wearing a “We Are West” that her brother, Brett, who is a freshman at West, had gotten for her.

Her sport is softball.

Third-grader Chad Brewington is the son of Principal Wendy Brewington. Asked what it’s like to have your mother as principal, Chad said it was good in that you don’t have to worry about being bullied or anything. On the other hand, he said, “others can do stuff and get away with it.”

Chad thought it was “pretty cool” to meet the players because they are the best in the state.

While the players were signing, Cox visited with students waiting in line. The morning brought a bonus when she spotted the “National Sarcasm Team” shirt that first-grader Dyland Leon was wearing.

She enjoys humor in general, and it’s a good way to take a break from the seriousness of playing basketball. So she thought she might look into finding a “National Sarcasm Team” shirt for herself.

With all of the Clemmons students in their classes, Cox and the West players were off to pick up breakfast on their way to school.