Your Neighbor: Setting the stage: Theater teacher Inkem Baker also has passion for health and wellness 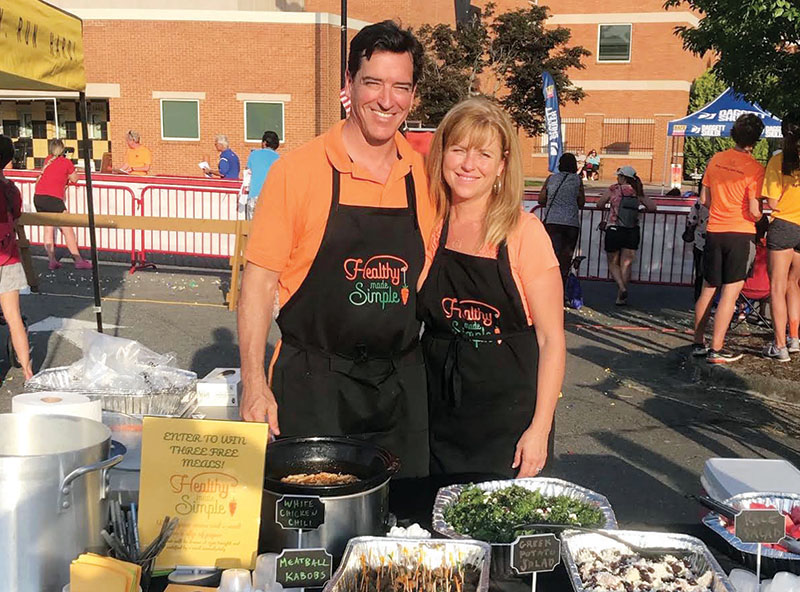 Inkem Baker with his wife, Pam, at a local race event.

If you were to ask a young Inkem Baker where he would be at this juncture in his life, he would have likely told you it had something to do with football. He spent his formative years in Milwaukee, Oregon, training to be a professional football player. Not one to ignore his academics, he maintained his grades and was student body president.

It came as no surprise to Baker’s family when he got recruited to play for Harvard. “My SAT scores weren’t quite where they needed to be, so they recommended I attend prep school first in New England,” recalls Baker. He would take a different direction after his year at prep school and ended up at Wayne State College for a year in Nebraska. This wasn’t meant to be Baker’s final college selection. Having received a scholarship from Temple University, he graduated after 2½ years.

Baker’s dreams of playing professionally ended his senior year at Temple when he got a series of concussions. He saw another door open, however, when one summer he took theater for an easy grade with some of his football teammates. “I was always in theater in high school. When I was in college, I got along really well with the director and he encouraged me,” he says. The passion for theater was ignited.

After college, Baker went to graduate school. “I had thought about becoming a principal,” he said. He graduated a year and half after his program began in Guam. Baker began helping a new school get started. “This new school had been 10 years in the making,” he recall. “We had raised over $150 million to get it started. They had closed down two rival high schools and combined them into one.” Baker’s role was getting the logistical operations in order. Not long after the doors opened, a typhoon hit wreaking havoc on this new school. “It was a really nice school. It was built for the Micronesian Games — an Olympic-caliber venue,” remembers Baker. “The rooms were flooded with water, the air conditioning didn’t work, and the roof of the gym came off. It was a disaster.” Other factors made it not a magical first year. “I had to deal with students who truly hated each other deep down from years and years of an intense rivalry. There were riots. I spent a lot of my time working with the police too.”

Baker’s teaching background gave him flexibility with where to establish roots. Having grown up in Milwaukee he knew that he wanted to be somewhere it didn’t rain all the time. After a stint in Arizona, Baker ended up in North Carolina. He had gotten married after his adventure in Guam and had two children, a son and daughter several years apart.

Baker spent 16 great years teaching theater in Hillsborough. Inkem and his first wife divorced. He continued teaching and even began dating. He had given online dating a try. “The way I saw it, it was like baseball, you’ll have better luck if you keep giving it a try,” laughs Baker. He met his future wife, Pam with his tenacity. They were married a year and a half after they first started dating.

Inkem and Pam decided to expand their partnership beyond their personal lives. They opened Healthy Made Simple the same week that they got married. “We both share a passion for health and wellness. Cooking healthy meals is hard to do for busy people and families. By taking that step out for people it frees up time and keeps them eating healthy,” describes Baker. “We hope that this allows people to get back the time that they would spend in the grocery store, kitchen preparing, and cleaning it up. It’s convenient because you can order it online and it’s delivered right to your doorstep.”

Although Baker works full-time at North Forsyth High School in theater, he still is very much present at Healthy Made Simple. “We rotate from a variety of 150 recipes from sources such as Cooking Light.” Baker enjoys the other side of the business of marketing and conducting a small business. “It’s interesting to see the most efficient ways to reach people.”

The Bakers aren’t all business. They can be found doing adventure runs frequently to inspire others to keep things healthy and interesting. “It’s fun because we have to do navigation, get to various check points, and deal with one another when we get lost,” describes Baker.

Our neighbor Inkem Baker subscribes to Steve Job’s mantra, “We’re here to put a dent in the universe. Otherwise why else even be here?”