Going the distance: Atkins continues to see success on the track 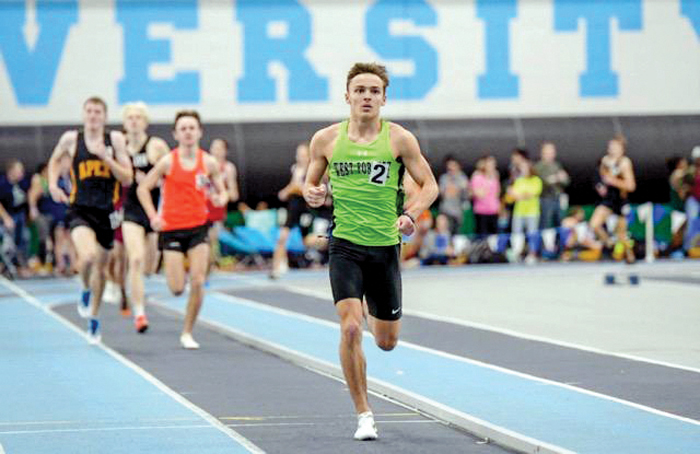 The accomplishments continue to pile up on the track for West Forsyth junior Will Atkins.

Atkins added individual championships in the 800 and 1600 at last week’s Scott Brent Invitational — also known as the city-county championship — to go along with an NCHSAA 4-A state indoor championship in the 1000 he previously won in February at JDL Fast Track. In October, he finished fifth and helped lead the Titans to the Midwest 4-A Regional cross-country championship

Last weekend, he competed in the Bojangles Track & Field Classic in Columbia, S.C., and finished third in the 800 against some of the best competition from across the Southeast.

“I ran well, but I made a mistake in the last 100 that might have cost me the race,” Atkins said. “I made a move outside to try and pass for the lead and it slowed me down. Looking back on it, I should have just stayed in my lane.”

It shouldn’t be a surprise that Atkins still has more goals to reach before the end of the season, with the Central Piedmont 4-A Championships and regional and state meets on the horizon.

There aren’t many distances that Atkins can’t master. He covers 3.1 miles during cross-country in the fall, where he finished 14th in the state meet last November. He won the state title in the 1000 three months ago, a distance he only began running as a sophomore. After picking up the 2-mile distance of middle school cross country as a seventh grader, Atkins won the county championship in eighth grade.

Not too bad for someone who didn’t really run before seventh grade and said that he only began as a way to get in shape for basketball.

“I really wanted to play basketball in middle school and my dad suggested that I run cross country as a way to get in shape for it,” Atkins said. “My dad, Chris, ran in high school and college and told me it might be good for me. Once I tried it, I knew I liked it and I was pretty good at it. I ran track after basketball season and really loved that too.”

That meant putting basketball in his rearview mirror, which Atkins said wasn’t too difficult a decision.

“I kind of realized my future was more in running in eighth grade, so I gave up basketball after middle school,” Atkins said. “I knew indoor track would be the same time as basketball once I got to high school and that’s the direction I wanted to go.”

Atkins still wasn’t convinced he wanted to tackle high school cross country as a freshman because of the increased distance.

“I wasn’t even sure I was going to run cross country my freshman year because I wasn’t sure I was comfortable with the distance,” he said. “I hadn’t really trained for that too much, but once I decided to do it, I gradually worked my way into it and continued to increase my mileage. The more I did it, it got to a point where it became natural for me.”

Atkins flourished as a freshman for the Titans, earning all-conference honors and top-10 finish at the Seahawk Invitational in Wilmington.

During indoor track his freshman year, he qualified and competed in the 400 at the New Balance Indoor Nationals in New York City against some of the top ninth graders in the country.

Leading into his sophomore year, Atkins would log 35-40 miles each week to prepare for cross country season. He picked up the 1000 during indoor track and continued his ascension in the middle-distance races during outdoor track.

“Running has definitely given me a lot more self-discipline,” Atkins said. “You have to be motivated to do it on your own to get better. Running has helped me to become tougher mentally. You are always challenging yourself and setting goals. It’s all up to you and I enjoy that.”

Atkins said that the team element at West has also been beneficial in his development.

“I love that running is an individual sport with a team dynamic tied into it,” said Atkins, who is also involved with Fellowship of Christian Athletes. “We have a great team aspect here at West. We are all really great friends and a close group. That’s a huge benefit to have people rooting for you, especially when you are out there by yourself trying to get to the finish line.”