In service : West Forsyth Key Club is dedicated to helping the community 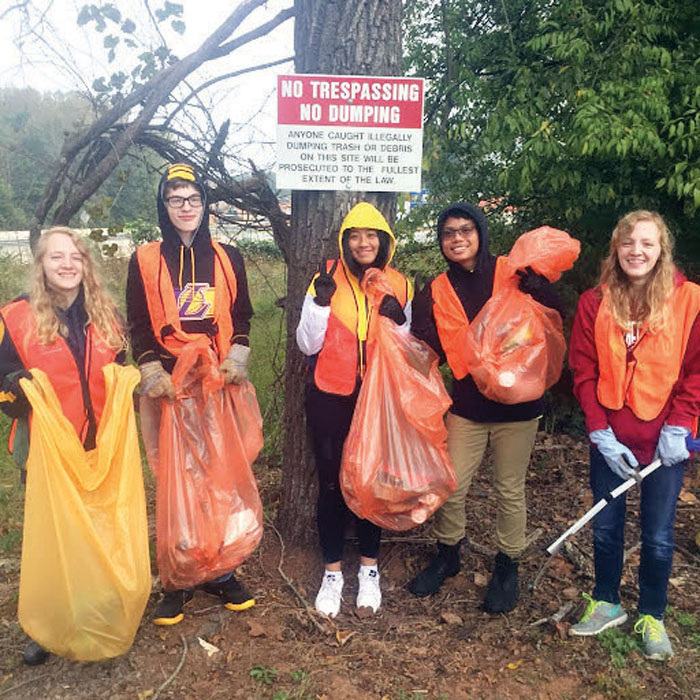 Kerry Cope, James Cope, Kristine Danao, Zane Sobejana, Katie Cope. This is from the Clemmons Cleanup event that happened in October of last year. The Key Club teams up with Kiwanis and help clean around Clemmons.

If you happen to be one of those individuals who worries about the future — about the caliber of people who will one day take over the leadership roles in our communities and in our country, then maybe a trip to West Forsyth High School is in store.

Students, from freshmen to seniors, are spending a great deal of time outside of studies, involving themselves in a very positive way in the lives of people throughout the community — from children to senior citizens. A lot of the credit for that would have to be given to Theresa Bryant, the Key Club’s faculty advisor. When Bryant was assigned sponsorship of the club four years ago there were around 20 active members. Today, there are more than 300 members and the list of service projects tackled by a very enthusiastic group of teens is ambitious.

Bryant, who didn’t even want to estimate the number of hours she devotes to Key Club, said she loves doing it, and finds it rewarding to see how the students get started with service of some sort, and it quickly becoming a passion. “These kids are learning early the importance of being involved and they see first-hand what a difference can be made when people come together, finding ways to be of service.”

Bryant describes her role as “the vehicle for getting the students where they want to go and when they want to get there. They come to me with ideas of ways they would like to be of service and I try and find ways to make it work. I don’t want to say no to them.”

Her enthusiasm is contagious, and since Bryant says she doesn’t get involved unless she’s giving it 180 percent, it’s easy to see why the West Forsyth Key Club members stay so busy and have had such an impact on the community. As part of being the “vehicle,” Bryant provides students with a variety of opportunities for service. “There are always papers all over the table outside my classroom with signup sheets for volunteer opportunities. I offer 20 hours of community service a month, and then they can come up with ideas on their own,” she explained. “Maybe they do something for their church or provide babysitting service. Whatever it is, I try to make it work out so that they get to do the things that they are passionate about.”

That’s how the Key Club got involved in raising money for The March of Dimes. “We have triples here at West who were born premature, and the March of Dimes program was one they were interested in supporting,” she said.

Another group wanted to get involved with the Joy Prom, a special event for individuals with special needs, “and so we had 15 students volunteer to help with that event,” Bryant noted.

Bryant requires students to accumulate 10 hours of service a semester, but most of her members average around 35 hours.

Some of the ways they do that is by playing Bingo with residents at Trinity Elms each week, making Valentine cards for children at Brenners Children’s Hospital, supporting for the Boys and Girls Home of North Carolina, volunteering with the Samaritan Ministries, participating in community clean-ups, making Blessing Bags for people in need, writing letters to veterans and raising money for the THIRST program, which will build a well for a local community in Swaziland. “We are only $800 away from reaching our goal in that effort,” she explained.

Other events planned by the students were a Fund Run, at Meadowlark, which raised $7,000, a fall festival for elementary school students, a yard sale that will take place in June, and a program that the Key Club students, in partnership with the Future Teachers of America club at West, called Titan Buddies.

“First period for students at the nearby elementary school starts at 8:10 and runs until 8:40 a.m.,” Bryant said. “Our classes haven’t started yet and so a group of students will go to Southwest Elementary and spend time with youngsters who might need a little help or just time with someone who will encourage and support them.”

She explained that what she wants to see the students do isn’t “ringing the bell” or “collecting can goods.” “I want them to be doing, not just collecting. Go to the Food Pantry and stack shelves or be out there collecting the donations when the Samaritan Ministries has its Penny Campaign. These are the ways the students are being of service, and I’ve seen it change lives and I know we are watching these students become those who will be leaders in the future. We’re setting an important precedent.”

She said there have been a number of West Forsyth graduates and Key Club members who have gone on to college and joined service organizations at that level. “A number have taken on leadership roles.”

When asked how she manages all that being the club sponsor requires along with her teaching duties and family obligations, Bryant said she does find herself doing something related to the Key Club most weekends. “But how could you not want to get involved with these young people and what they are doing,” she said. “When you give them ownership of this, they step up and get it done, and I’m very proud of what they are doing and learning. These sorts of experiences gives you new insight to what teens are really like. They are amazing, and have such big hearts. Sometimes a person just doesn’t know how to get started helping out and volunteering. That’s where I can help. I can direct them toward the Soup Kitchen or the Humane Society. Go play with puppies for a few hours. Sometimes it just takes that little nudge.”

Her devotion to the organization and its mission was recognized recently at the district conference where she was named Adviser of the Year. She was selected from advisors from some 300 clubs within the district. “We have started going to conferences outside of our area. We’ve been to Chicago, Baltimore and even to Texas.”

Key Clubs were started by Kiwanis International, and the first club was started in 1925. The West Forsyth Key Club was formed in the 1960s and today is one of the largest clubs at the high school. There are Key Clubs in some 38 counties.

The West Forsyth Key Club is also the largest in the county and the third largest in their district, which includes both North and South Carolina.