Spring sports in the homestretch for Titans 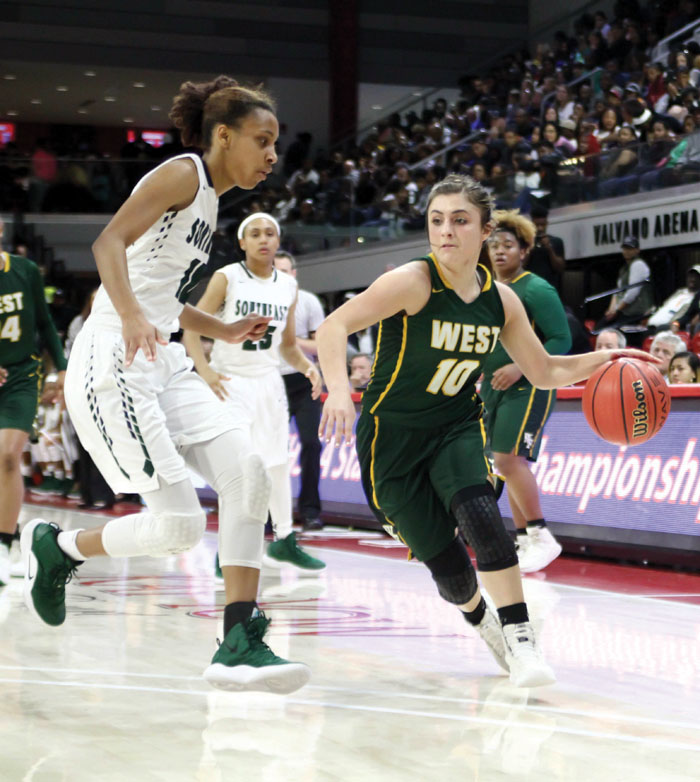 West Forsyth’s Callie Scheier drives against Southeast Raleigh during the 4A state championship game. Scheier has been named the co-Player of the Year in North Carolina by the Associated Press.

The regular season is winding down and spring sports teams at West Forsyth are ramping up for their upcoming postseasons.

Several teams are vying for Central Piedmont 4-A Conference championships and several more are in the mix.

The girls’ soccer team entered the week undefeated at 16-0 overall and 6-0 in league play and ranked No. 1 in the state in the MaxPreps.com poll and No. 4 in the MaxPreps national poll.

West has been dominant on defense in allowing only five goals all season, with just one of those coming in conference play (a 2-1 win against Reynolds.)

The Titans have outscored their opponents in conference games 20-1 and had four games remaining in the regular season (Davie on April 23, Reynolds on April 25, Reagan on April 30, and Glenn on May 2) at the beginning of the week.

Will the Titans make another run at a state championship like they did in 2017? The team is loaded with experienced, senior leadership who have a goal of repeating what they did two seasons ago in Raleigh.

The state tournament will begin the week of May 7.

The softball team also sits in first place with two games left in the regular season.

The Titans have had quite the power influx this season as well as solid pitching from senior Alex Rodriguez while compiling a 17-2 overall record and 6-0 in the conference.

The Titans’ only two losses were against Central Davidson (8-3) and Watauga (6-5). The two remaining conference games on the schedule are against Reagan (April 23) and Glenn (April 25) before the conference tournament starts next week.

The 4-A state tournament will begin the week of May 7.

The baseball team has been holding their own in the tough CPC.

The Titans entered the last week of the regular season 13-8 overall and 3-5 in the conference but should have some momentum after winning three of four games last week at a tournament in Myrtle Beach.

West is tied for third with Glenn in the league standings behind 7-1 Davie and unbeaten Reagan.

The Titans have surrendered the third fewest runs (37) during conference play and should be in good position to make some noise in the conference and state tournaments.

Despite finishing .500 in league play last season, the Titans made a run to the final eight in the state tournament.

The girl’s lacrosse team finished in second place in the regular season with a 4-1 record with their only loss coming against longtime powerhouse Reynolds by a score of 13-11.

The Titans allowed the fewest amount of goals (37) in conference play this season, two fewer than Reynolds.

The Titans are 7-6 overall and led by senior Kendyl Stewart, who has poured in 76 goals this season while dishing out 36 assists. The conference tournament began on Wednesday and the state tournament will begin next week.

The boy’s lacrosse team closed their season on Monday against Davie. The Titans entered the Davie game with a 10-4 overall record and 2-3 in the conference, which put them in fourth place.

After completion of the conference tournament, the Titans will begin the state tournament the week of May 1.

In track and field, there are many athletes from West who should be contenders during the conference, regional, and state meets.

Senior point guard Callie Scheier, who helped lead West Forsyth to the NCHSAA 4-A girl’s state basketball championship in March, was named the co-Player of the Year in North Carolina by the Associated Press earlier this month along with Saniya Rivers of Wilmington Laney.

Scheier has been piling up the hardware in the offseason. She was named the CPC Player of the Year, a first team all-state selection, and was the Most Outstanding Player of the state championship game.

Scheier, a 5-1 point guard and four-year starter for the Titans, scored 29 points in the title game — 21 of which came on 3-pointers. She averaged 28 points per game this season and has signed with High Point.