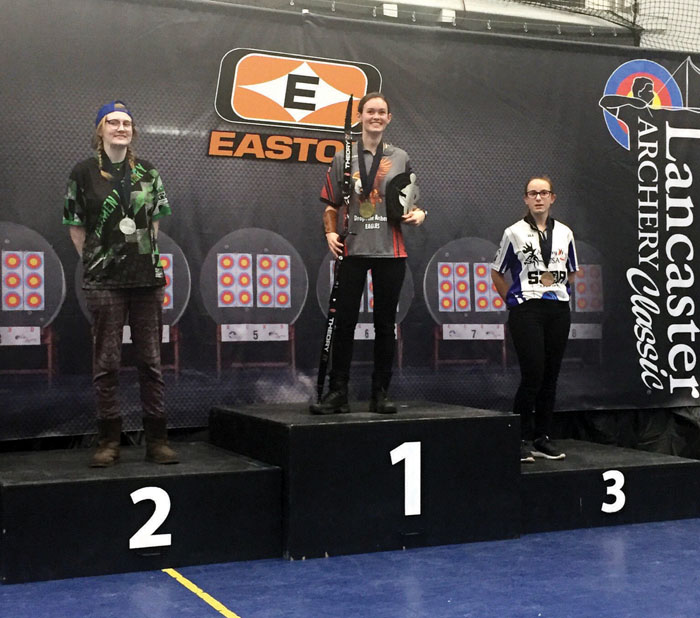 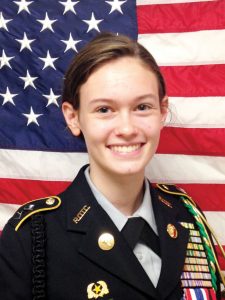 Hannah Ball was only 12 when a coffee-table book caught her attention, and after looking through it, she envisioned a possible path for her future. The book was about West Point, and Hannah, only a sixth grader at the time, imagined herself someday attending the famed military academy.

Now, a junior at West Forsyth, the high-energy teenager speaks with passion about her involvement in the JRTOC program at her school. “JROTC is my life,” she stated. “Everything else is a side job.”

Hannah first learned about the course that would quickly become her favorite class when she looked through the high school registration handbook that listed classes when she was in the eighth grade. She enrolled in the class, and quickly adapted to the expectations of being a cadet. “Right off the bat, I was into leadership and the competition,” she said. “The experience is beyond being a good student or athlete. It helps you to become a well-rounded person.”

This has certainly been the case for Hannah as she is successful in the classroom, actively involved with her church, and she has participated in a number of community service projects both as a member of the JROTC and Clemmons United Methodist Church.

One significant service project experience has been her participation in the Buddy Walk, an annual event that celebrates Down Syndrome Awareness. Along with other members of her youth group at church, she has twice committed a week of her summer to the Carolina Cross Connection service group. This has involved engaging in various service programs including home repair projects, painting, and building wheelchair ramps for elderly and disabled individuals.

While at school, Hannah puts much of her energy into her JROTC class, but she makes an effort to do well in all of her classes.  She is a focused student who has always taken on a challenging academic schedule beginning when she was in the HAG (Highly Academically Gifted) program at Brunson Elementary and Hanes Middle schools. In high school, she took her first advanced placement class, AP world history, as a freshman, and she has since taken several Advanced Placement and seminar courses. As a junior this year, she is enrolled in AP U.S. history, AP calculus A-B, AP language, AP environmental science, and AP human geography. She has a 4.0 GPA despite taking so many challenging classes.

The JROTC program at West Forsyth is popular and highly competitive. About 120 students are enrolled. The West program won the County Raider Meet on April 6. The competitions at this event involved activities that featured physical agility and strength and included a challenging obstacle course. Much of the team’s success was due to Hannah’s leadership role as the battalion commander.

“The team at West Forsyth is typically strong,” said Rob Ball, Hannah’s father. His comment is backed up by the fact the team won a national competition last summer at an event called the Junior Leadership and Academic Bowl. The event drew teams from 40 schools including a few representing international programs.

Hannah takes pride in both her contributions to her school’s JROTC program and some of her individual successes. Just a over a week ago, she won the Brigade Board competition on April 23 after being selected by West Forsyth to be the school’s representative at the event. As a result of her success at this competition, she will serve in the capacity of the highest-ranking officer in the county, brigade commander.

Hannah is also an accomplished archer, and she has had some significant successes in various competitions. As a freshman, she ranked second in the nation in the Junior Olympic Archery Development program, and she has maintained a high ranking while competing in independent club events. She has won several meets including one that involved international competition.

More important than the awards that she has won, Hannah values the social experience that she has had by being a part of the JROTC program at West. “I have a unique group of friends,” she remarked. “We started together as freshman and then gained leadership positions. It’s hard to be a leader for your own friends, but it has actually strengthened our relationships. Rank doesn’t matter, it is the relationships that are most important. We actually like to spell JROTC – F-A-M-I-L-Y.”

Kim Ball, Hannah’s mother, has observed and admired the cohesiveness of Hannah’s friends in the JROTC program. “The program itself fosters friendships, she said. “It’s a cross-section of kids, and I actually think that it helps some kids to graduate.” To back her mother’s comments, Hannah noted that a tutoring program is a part of the class. This involves members helping their classmates to study and prepare for classes where they are struggling academically.

Hannah did not realize when she made the decision on her own to make it a goal to someday attend West Point that her paternal grandfather Robert Ball had attended the academy himself. She found out about this when her father Rob told her that his father, a retired Army colonel, had graduated from West Point in 1977. He is now an inspiration to her, and Rob noted that the two of them often engage in conversations on the side at family gatherings where they talk about both his military experiences and being at West Point.

“You cannot ask for a better mentor,” Hannah said, speaking of her grandfather. She noted that she has also had good support from her parents and all of her grandparents throughout her life, and that this support has made her want to do her best.

“She’s naturally driven,” her father commented, “and the decision to go to West Point has increased her drive.”

Hannah will soon begin the process of applying to West Point. In the next month, she will request a congressional appointment from a member of the U.S. Congress and/or a vice presidential nomination. From there, she will do the additional steps to hopefully realize her lifelong dream.

Given her hard work throughout her high school career and her many hours of service, Hannah’s family and friends will be supporting her as she completes the process of applying to one of the best academic institutions in the country.