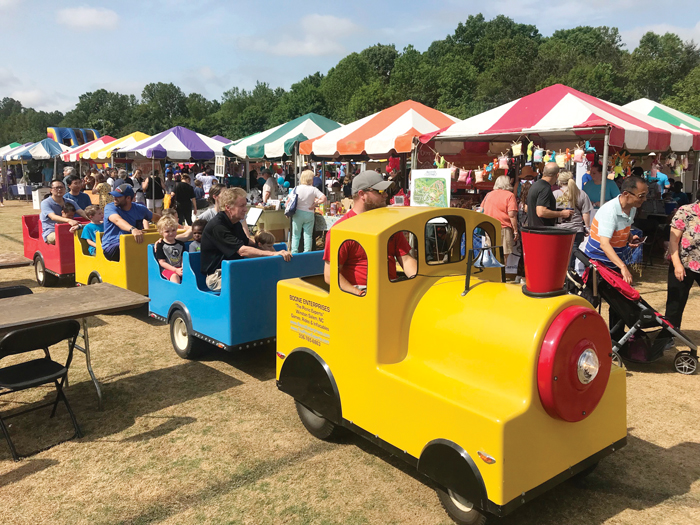 Once again, it was a day to celebrate Clemmons, and this one had some special significance.

“It’s a beautiful day, and it’s our 10th annual Clemmons Community Day,” said Kristin Johnson, who is the president of the Lewisville-Clemmons Chamber of Commerce and led the committee in preparing for the event.

Saturday’s crowd at the Jerry Long YMCA enjoyed comfortable temperatures in the 70s while taking in all the food, games and entertainment available as local businesses displayed their goods in the various tents and booths.

Johnson said there were 130 vendors participating in 2019 and double the number of food trucks from last year with more activities for the kids. One of the additions was a NASCAR simulator.

Congresswoman Virginia Foxx, who represents N.C.’s 5th District in the U.S. House, was one of the dignitaries on hand. She hasn’t missed a Clemmons Community Day in all 10 years.

“I’ve been here every year, and every year it gets better and better,” Foxx said. “You have fantastic leadership here that puts all this together including the Y and the Chamber and all the volunteers who come.”

Brea Love of WXII served as the emcee, and after opening remarks by Johnson, the West Forsyth ROTC Honor Guard presented the colors, followed by Bobbi and Dave Eschenbach singing the Star-Spangled Banner and Foxx leading the crowd in the Pledge of Allegiance before Mr. Bill’s Productions cranked up the music.

For Love, one of the anchors on WXII who recently moved to Clemmons, it was her first time serving as emcee.

“I’m really excited to see all the local businesses and all the different things I’ve experienced here,” Love said. “I’ve had a lot of fun, and I really truly love Clemmons.”

Besides the YMCA Healthy Kids Day exercise, kids enjoyed a variety of fun things to do, including train rides around the grounds, slides, bounce houses and a rock-climbing wall.

Certainly, the 10th anniversary event has come a long way since the original idea from Jody Peske and John Bost about bringing together people from Clemmons and the region in a common venue to give opportunities for business persons in the community to share their businesses and also connect the citizens of Clemmons and this region came to fruition in 2010.

Then it really took off in the fourth year when the Lewisville-Clemmons Chamber of Commerce and the YMCA decided to join forces, all on the Jerry Long Y grounds.

“We are getting bigger and better every year,” Johnson said.

In addition to the many volunteers and supporters, this year’s Platinum event sponsors were Allegacy, the Jerry Long YMCA, Novant Health, Truliant Federal Credit Union and Wake Forest Baptist Health.

Johnson, who is director of Historic Broyhill in Clemmons and also owned an event-planning company for many years, said that this year’s event has been a smooth process.

“We had a great committee,” she said. “With a great team, you can accomplish anything. And we really value our partnership with the Jerry Long Y. They provide so much as far as platform and a great place. It’s really convenient. It’s been a great partnership.”