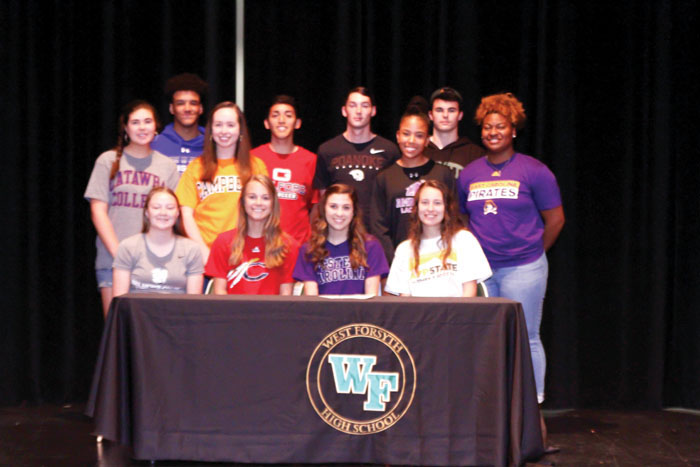 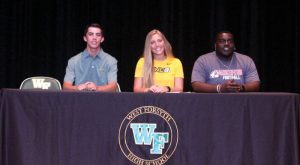 The West Forsyth girls track and field team finished second and the boys were third at the recent Central Piedmont 4-A Conference meet, and both teams came away with plenty of individual and relay champions.

Destiny Griffin and Mason Ellis were both double winners in the discus and shot put.

Ellis won the discus with a throw of 172 feet and the shot put with a distance of 56-4.

Both Griffin and Ellis won the shot put at the NCHSAA 4-A indoor state championship meet in February.

Ari Carroll captured the title in the 100 hurdles, finishing in 16.13 seconds.

The Midwest 4-A Regional was held on Monday, where the top four finishers in each event qualified for Saturday’s state championship meet in Greensboro at N.C. A& T. Results for the regional meet were not available at press time.

The girls soccer team, which entered the NCHSAA 4-A state tournament as the top seed and ranked No. 1 in the state according to MaxPreps.com, won their second round matchup by defeating Indian Trail Porter Ridge 2-0 last Friday. Kat Spencer and Amber Skinner scored the goals for the Titans and Riley Dorman and Meredith Stewart had the assists.

Kerry Eagleston had five saves in goal for West (21-0) which played East Forsyth at home in the third round on Tuesday.

The seasons for the baseball and softball teams ended with first round losses in the NCHSAA 4-A state tournaments.

The baseball team, which won the Central Piedmont 4-A Conference tournament championship after beating Reagan and Davie — the top two seeds — on successive nights, lost to Harrisburg Hickory Ridge 4-2 and finished the season 18-9.

In the first round of the state tournament, Scotland downed West 3-1 as the Titans finished the season 22-4.

Darius Hill was one of 33 recipients of a $1,000 scholarship by the Eugene Corrigan-Bradley Faircloth Triad Chapter of the National Football Foundation and was recently recognized during a dinner banquet on April 30 at Rehobeth United Methodist Church in Greensboro.

The son of Johnny and Charla Hill, Darius was a two-year varsity starter, a team captain, and on the A/B Honor roll all four years. He is active in ministry opportunities at his church, where he facilitates and sometimes leads Vacation Bible School activities.

Hill plans to attend N.C. State, UNC-Charlotte or N.C. A&T and hopes to have a career in electrical or architectural engineering.

The scholarship recipients are chosen by their respective high schools for their excellence in the classroom, in the community and on the football field.

Kendall O’Neal, a member of the girls track and field team, is one of 15 regional winners to be awarded the Willie Bradshaw Memorial Scholarship. The scholarship provides $750 to a black American, Native American, Alaska native, Asian American, Native Hawaiian or other Pacific Islander, or Hispanic American.

O’Neal has run track for four years and indoor track for two years. She has set school records in the 200-and 400- meter runs and has been accepted at N.C. A&T and N.C. Central. She plans to major in early childhood education.