Your neighbor: Mechanical man: Brad Sheldon has a love of engineering, family 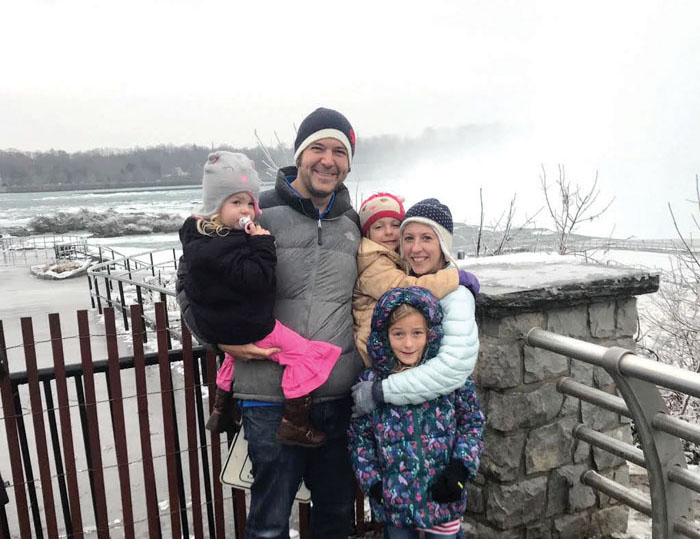 Growing up in the Michigan area, Brad Sheldon’s early memories consist of playing lots of sports and being coached by his father. “My dad instilled in me from a young age that it was important to be active and be part of a team,” remembers Brad. Playing baseball, basketball and football kept Brad very busy and he enjoyed the life lessons that came along with it.

“I also enjoyed tinkering with car engines,” notes Brad. “While in high school I built my first ’78 Chevrolet Camaro. The youngest of three kids, Brad graduated high school and received a full football scholarship to the University of Akron in Ohio. “It worked out well because I wanted to continue playing football and study mechanical engineering,” mentions Brad. During this time he would meet his future wife, Katie, his senior year in college. “We had mutual friends,” remembers Brad, “so it wasn’t totally random.” The outside linebacker knew pretty quickly that Katie was a keeper.

During college, Brad was in the Cooperative Education Program which allowed him to work while in school. “I was able to make everything doable because I took summer classes too,” Brad says. His work experience made landing his first out of college job at Honda Research & Development Americas, Inc. helpful. “My specialist was mechanical moving parts like sunroofs, windshield wipers, etc.,” describes Brad. Brad and Katie also during this 6-year period were married in May of 2009. Their first daughter, Brooklyn was born two years later.

Brad was able to advance professionally fairly quickly. However, he was ready for a different opportunity. “If I had stayed at Honda it would have taken a little bit longer to make the next jump,” notes Brad. He and his growing family headed down to North Carolina to begin a new life. “I started off as a project engineer with then BE Aerospace,” explains Brad. “The company has changed hands and names several times, but my desk has remained the same,” jokes Brad. He was promoted to design manager within a few years as well. “We design aircraft seating here in the Winston-Salem area.”

When Brad isn’t designing and managing innovative thinkers, he is often found playing with his girls. After moving to Clemmons, Katie and Brad welcomed two more daughters to the family, Blakely in 2013 and Britton in 2016. “I definitely want to be part of my girls’ lives. For them. I want them to have fun and be part of a sport, something greater than themselves,” says Brad. Brad has coached both Brooklyn and Blakely’s soccer teams, and has even taken on basketball at the Jerry Long YMCA. “It’s fun to be a volunteer coach and instill the love of the sport like my dad did for me,” remembers Brad fondly.

Our neighbor is inspiring his children, and others in the community with life long lessons from sports. As Michael Jordan said, “My father used to say it’s never too late to do anything you wanted to do. And he said, ‘you know you never know what you can accomplish until you try’.’’

Your Neighbor: Innovative thinker: Noah McKay has left his…