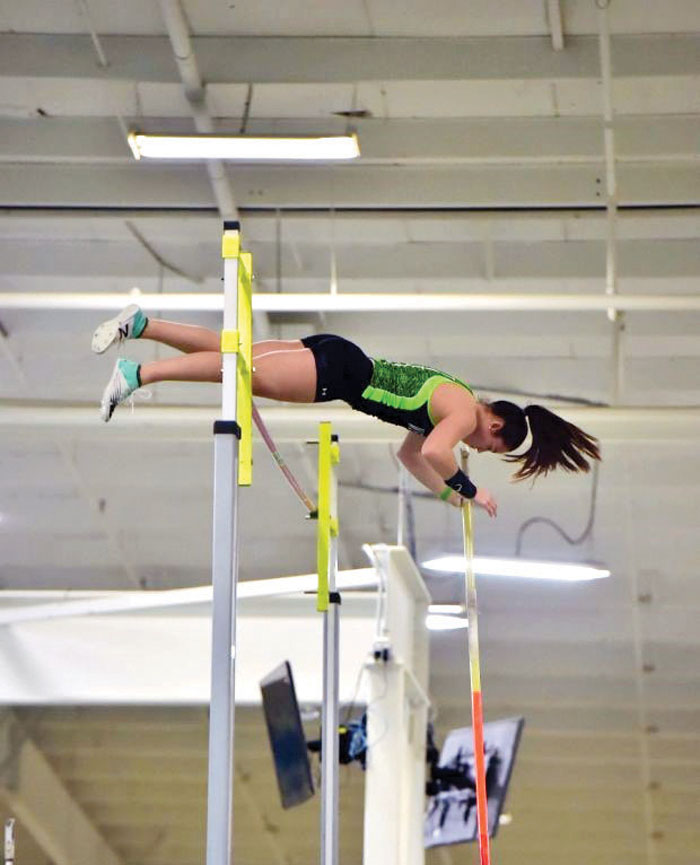 Lindsay Absher cleared 12 feet and captured her second straight state championship in the NCHSAA 4-A state meet last Saturday at Belk track on the campus of N.C. A&T University.

Lindsay Absher had one more state championship in her to round out her decorated career for the West Forsyth track and field team.

Absher, who will continue her career at Purdue University later this year, cleared 12 feet and had a clean sheet to capture her second straight state championship in the NCHSAA 4-A state meet last Saturday at Belk track on the campus of N.C. A&T University.

Absher won the 4-A indoor state championship in February after clearing 13 feet, 6 inches and establishing a new state record.

She will finish her career at West with three state championships — back-to-back titles the last two years during the spring and the indoor title this year.

“Not a bad way to end my career,” Absher said. “I have so much pride to wear ‘West Forsyth’ on my jersey. I’ve come a long way from beginning this by competing in the last three meets of my freshman year. Now, I’m a state champion, three times. That’s a pretty amazing feeling.”

Two other competitors cleared 12 feet, but Absher did it on her first attempt, which made her the winner.

“It was a tough day for vaulting because of the weather,” Absher said. “It was hot and windy, and the heat tends to make your poles bend more. We ran on short strides because there was a strong headwind and it was tough to adjust to the conditions.”

Absher said she didn’t feel any added pressure to defending her title.

“I went out there pretty confident,” she said. “I knew if I went out there and did what I was capable of doing, I would be fine. I got to vault with a few of my friends and some club teammates and it was an amazing day.”

Absher may have competed in her last meet as a Titan but her competition schedule still has a few meets left on before she heads to Purdue in August.

She plans to compete at the New Balance Nationals June 13-16, also at N.C. A&T, then the Powerade State Games and the under-20 National Championships in Florida in July.

“I may find a few meets in between as well,” Absher said. “Planning on continuing my training and competing until I leave for school in August.”

Destiny Griffin, who won the indoor state title in the shot put, posted a runner-up finish in the event last weekend to help the girls to a ninth-place finish in the team competition.

The West Forsyth boys finished in second place with 34 points, 12 points behind Cary.

Mason Ellis, who won the indoor state shot put title, finished fourth in that event last weekend and had a runner-up finish in the discus. Nathan Myers finished in sixth place in the shot put with a throw of 51 feet, 0.25 inches.

West Forsyth dispatched visiting Greensboro Page last week with a 2-1 overtime win in the third round of the NCHSAA 4-A state tournament.

Kat Spencer’s goal early in the first of two overtime periods held up as the Titans improved to 23-0 this season.

Riley Dorman put the Titans ahead with a goal in the 22nd minute, but Page tied the game at 1-1 before halftime.

West played against Southern Pines Pinecrest (25-0-1) at home in the semifinals on Tuesday night (result not available at press time), with the winner advancing to this weekend’s state championship match in Raleigh.