City and county honors King for longtime planning board service 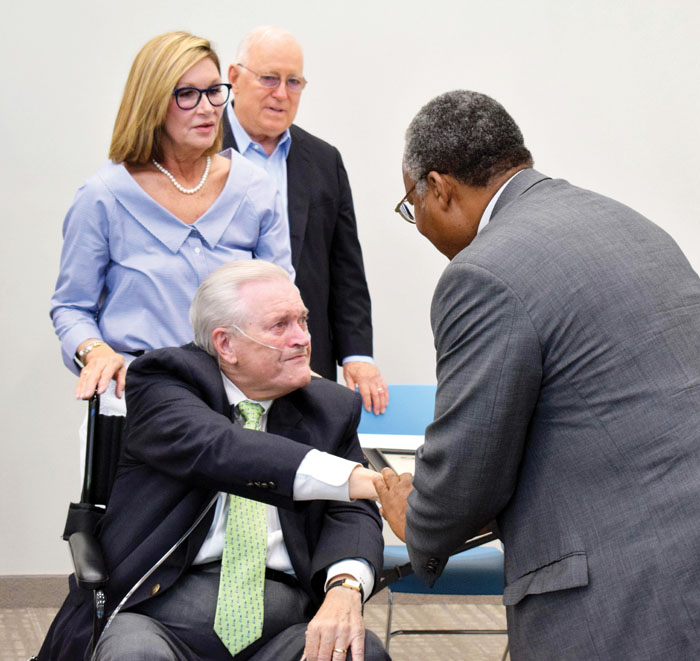 Former City-County Planning Board Chair Arnold King was honored by both the Winston-Salem City Council and Forsyth County commissioners with a proclamation that was presented to him on Thursday, May 16, at the Paddison Memorial Branch Library in Kernersville.

Winston-Salem Mayor Allen Joines and Forsyth County Commissioner Vice Chair Don Martin presented the proclamations. Commissioners Dave Plyler, Don Martin, Fleming El-Amin and Tonya McDaniel  were also there to honor King. Members of the planning board, along with county and planning staff, were also in attendance. Attendees thanked King for his fairness, dedication and hard work in serving the residents of Forsyth County.

King served on the City-County Planning Board for 19 years, from February 2000 to April 2019. He served as the board chair for 16 years. He is the longest serving member of the board and the second-longest serving chair.

He had a perfect attendance record, attending 420 public hearings and work sessions without missing a single meeting. He’s been a part of more than 1,500 zoning cases, 229 Unified Development Ordinance (UDO) amendments and over 800 combined preliminary subdivisions and planning board review site plans.

King oversaw the creation of the first countywide series of small area plans to guide future land use in the city and county. He also provided guidance for the Legacy Comprehensive Plan in 2001 and the award-winning Legacy 2030 Update in 2012-2013.

The Public Meeting Room in the Stuart Municipal Building, where the City-County Planning Board meets, will be named in honor of King.