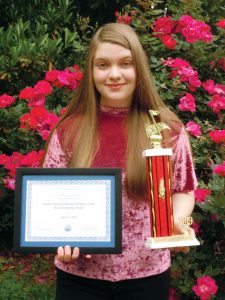 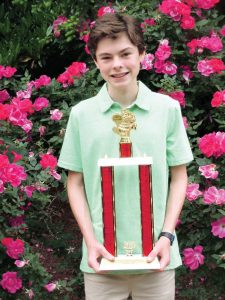 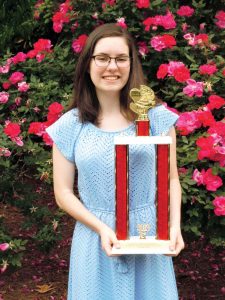 The National Federation of Music Clubs hosts 13 junior festival music events in North Carolina each year as part of the NFMC’s national program. This year, approximately 4,000 students competed statewide in their local events. Winners of the local competitions continued on to the state finals, recently held on the campus of UNCG.  Local students, from the music studio of Teresia Ann Queen and the Wake Forest district, brought home four state titles, including one scholarship from this year’s nationally recognized competition.

The Sara Copley Moore Folk Singing award was won by Caity Smith, daughter of David and Danielle Smith. Smith won the local Wake Forest Junior Festival event and represented our area to the state finals. She is a graduating senior from the North Carolina Connections Academy, and enjoys gymnastics, theater productions and singing.  She was recently inducted into the National Honor Society for Dance Arts and is a competition dancer. Her passion is singing and she hopes to make it a career. After her high school graduation, she will be attending college with a major in music.

The singing award won by Smith, is sponsored by Sara Helen Moore of Charlotte. Moore is the former National Federation Chairman of Folk Music for the NFMC. Helen says she developed a very real appreciation of this style of music since we here in North Carolina have such a rich heritage of folk music. The award is named with her maiden name to honor her parents who helped instill in Helen a love for music. For many years as a kindergarten teacher, she taught folk music with an autoharp to her students. Smith won this state title and award with her performances of the folk ballade “Shenandoah” and a stirring rendition of “The Battle Hymn of the Republic.”

Smith was a double winner this year, also winning the vocal art song competition for senior girls continuing on to study music in college. She is the recipient of the Marion Owrid Heal Scholarship and holds the state title in vocal art performance. She won the title with her performances of the Italian art song “Nel Cor Piu Non Mi Sento” from Giovanni Paisiell’s 1788 Opera La Molinara and The Cherry Tree — an art song written by Cecil Gibbs.

Another area of the NFMC state finals includes hymn playing in Classes I-V. Two of the five 2019 NFMC state hymn playing titles were also won by local Wake Forest area winners, brother and sister, Natalie and Jeffrey Lyons. Their parents are Mike and Karen Lyons and the family belongs to Clemmons Presbyterian Church.  Jeffrey, an eighth-grade student at Meadowlark Middle School, won the Carolyn Jones Summerlin Hymn Cup Class I competition. Jeffrey is very active in a variety of church ministries, including singing with the CPC Youth Choir, the Son Risers Choir and ringing with the Middle Chimes. His interests include tennis, art, music, nature, church and GOOTH, (the CPC Youth Group.) Jeffrey also played on the Meadowlark Middle School Tennis Team this year. He will attend West Forsyth High school in the fall as a freshman. Jeffrey’s competition music included two contemporary hymns: “You Are My All In All” and “The Heart of Worship.” Jeffrey has previously won five nationally recognized gold cups in piano performance from the NFMC.

The Class II Hymn Playing event was won by Natalie Lyons, who is a sophomore at West Forsyth High School. Her winning performances included the popular “10,000 Reasons” and “Grace Alone.” Natalie has won five gold cups from the NFMC, which recognizes her musical excellence in piano performance. She is a member of the West Forsyth Marching Band and has been named the percussion captain for the upcoming marching band season. She enjoys all percussion in general and plays in the West Forsyth Wind Ensemble and the NC Youth Brass Band at UNCSA. She enjoys drama class, church and her youth group. Natalie was also selected to play percussion in the all-county and all-district bands during this school year. She sings with the CPC Son Risers, and plays percussion for the CPC church Christmas and Easter cantatas. Both Natalie and Jeffrey serve as young church musicians at Clemmons Presbyterian.

The NFMC has grown into one of the world’s largest music organizations since its founding in 1898. The organization provides opportunities for musical study, performance and music appreciation to more than 200,000 members nationwide in its 6,500 music-related clubs and organizations. The organization is dedicated to finding and fostering young musical talent and sponsor nationwide junior festivals with more than 117,000 participants. The mission of the NFMC is to advance and develop American music and musicians. It is a non-profit, philanthropic and educational organization dedicated to music education and the promotion of the creative and performing arts across America.