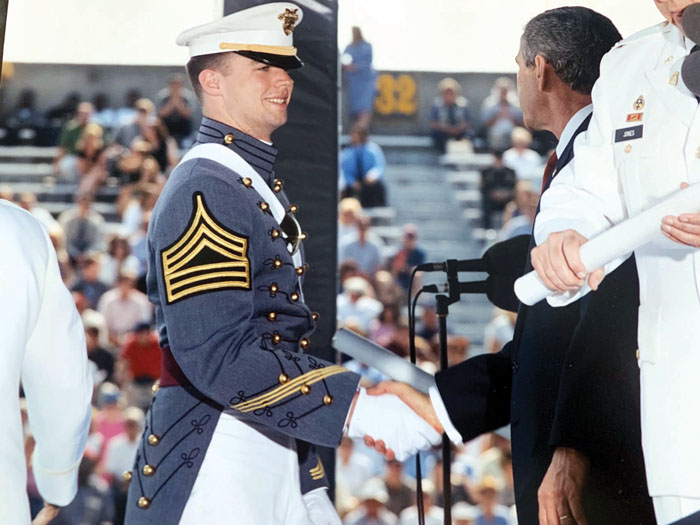 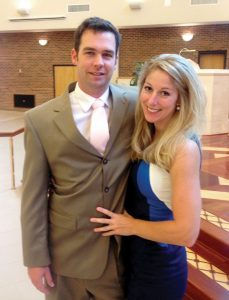 Chris Haggerson with his wife, Mandy

In full disclosure, I am related to the person in this article. However, I didn’t want to discriminate against Chris Haggerson because of it. Haggerson moved to the Winston-Salem area as a young child. His father had spent a career in the Navy, and after 25 years of service wanted to bring his family to North Carolina to start his private medical practice with another military retiree.

Haggerson grew up playing sports like swimming, cross-country, basketball and soccer. Chris loved having a very active lifestyle. “I remember after school my mom would make me play outside with my neighbors until dinner was ready. One of my friends’ mother would ring the dinner bell and we all knew at that point to go home,” laughs Haggerson. When it came down to choosing choices for college, he knew that he wanted to study engineering. Having observed his dad’s collective years of service, including multiple tours in Vietnam as a bombardier, it was no surprise Haggerson decided to attend the United States Military Academy at West Point. “My dad had gone to the United States Naval Academy so there was a little rivalry in the house,” jokes Haggerson.

When Haggerson first started as a plebe at West Point our country was not at war. During his senior year, 9/11 occurred and all of the cadets knew that their lives were about to change upon graduation the following year. Haggerson’s classmates were the bicentennial class, and they were about to see what their motto, “Duty, Honor, Country,” truly meant. When Haggerson graduated with a bachelor of science degree in electrical engineering he immediately continued his officer training at Fort Benning, Georgia. After a year under his belt, Haggerson was sent to Fort Hood, Texas.

As a scout platoon leader, Haggerson was tasked with planning and managing over 200 separate missions and combat patrols in Iraq, including enemy capture and oversight of 10 long-term observation posts. “One of our missions was to defend a polling station during Iraq’s first free election with no incidents,” describes Haggerson.

On Haggerson’s second deployment to Iraq, it was supposed to be his last as he planned to finish his military contract. Right before his deployment, he had proposed to his longtime girlfriend. However, his last deployment proved to be longer than the year he was originally promised. Haggerson’s deployment was extended by several months. During that time, Captain Haggerson managed and planned over 200 reconstruction and humanitarian aid projects throughout the Diyala Province in Iraq.

During Haggerson’s last deployment to Iraq, he started distributing his resumé to employers because he planned to live in Washington, D.C. with his fiancée. He was surprised to find that a company was more than willing to hire him without even having an in-person interview. Haggerson agreed to begin with Defense Life Sciences in McLean, Virginia, as their vice president of contracts and logistics. This company was comprised of former West Point graduates, and Chris felt right at home working on technology projects that would be of help to the defense and homeland government programs.

“One of our biggest projects was really interesting to me. We worked on a pilot program that turned waste to energy, the Tactical Garbage to Energy Refinery (TGER) for the Army which was then deployed to Iraq,” notes Haggerson. “As you can imagine it was very useful. Having had first-hand experience in the military was very helpful with knowing what types of products would be of benefit to the United States Department of Defense. I liked submitting proposals with real solutions.” While working, Haggerson made time to go back to school for his masters in mechanical engineering at the George Washington University.

During this time in 2011, Haggerson had been married for three years and had his first child. He and his wife took turns working from home to care for her. After 20 months, they realized they were pregnant with their second child, and knew that it was time to head back home to Clemmons. They loved Washington, D.C., but wanted to raise their children near family.

“Trying to figure out how to parlay my education and professional experience was tough at first,” notes Haggerson. After much deliberation, he decided to go into business with his two brothers-in-law. “My father-in-law, Brett Nelson, started the financial advising sports division at Wachovia back in the 1990s. Some of the bigger names, Deon Sanders, Richard and Kyle Petty, etc. wanted him to manage their money exclusively. So Brett left and started Kensington Financial, his own financial advising firm. One of the good problems to have was that his clients wanted him to do it all. That included health insurance. That’s where we came in. We could provide that arm and all still work together,” describes Haggerson. “So we started Blue Bridge Health Insurance and are working in the same office space with my father-in-law as well, which is really great for bouncing off ideas and helping clients with all their needs. We came down here right as the “Affordable Health Care Act “ became a law, so we were helping people learn what that meant as an individual, family, and small business owner. Everyone needs health insurance, so I do feel by providing that information I am able to better inform people of all their options. It costs them nothing for our advice and we aren’t beholden to one specific carrier.”

When Haggerson isn’t working, he is often on the soccer field coaching his young daughters, Anna (8) and Vivian (6). “I love that my children enjoy participating in sports like swimming, basketball and soccer,” notes Haggerson. “I appreciate the lessons they get from teamwork and trying your best. Win or lose, keep your head up and be a good sport.”

As you might have guessed, Haggerson is my husband. During Memorial Day weekend, we are grateful and reminded of those who have given the ultimate sacrifice. Neighbors like Haggerson remind us of Douglas MacArthur’s sage advice: “Duty, Honor, Country. Those three hallowed words reverently dictate what you ought to be, what you can be, what you will be.”

Your neighbor: Mechanical man: Brad Sheldon has a love…