Your Neighbor: Training day: Geralyn Kelly has a passion for working with canines 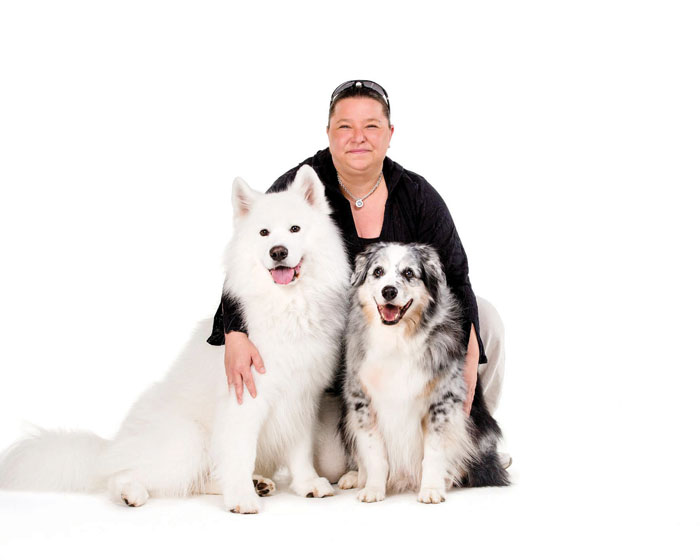 Geralyn Kelly and her dogs Nanook and Foster

Growing up with an older brother and sister, Geralyn Kelly learned from a young age to stand up for herself. “We never had any pets. We were not allowed to have them. The fluffiest pet I ever got was a hamster,” laughs Kelly. The irony of the situation is because Kelly is well respected in the community for her work to help animals and humans. As the owner of Elite Canine, it wasn’t the most straightforward journey to get to where she is today, but it was necessary.

Kelly always thought she would become a police officer. Back then, there was a height requirement in New Jersey, and that was just not possible. “Being only 5 feet tall, I had a teacher that I will never forget, who was so upset for me because she knew it was my dream to become a police officer,” remembers Kelly. Her teacher had someone from the corrections department speak to her class. Although the person was not the most professional, Kelly stood up for herself and females when he tried to convince them that they weren’t “welcome” in that field. “At that time there were certain departments females didn’t work in at the correction facility. I became a corrections officer and worked hard to get that changed. And I did,” mentions Kelly.

Kelly was eager to find her professional niche. She had tried waitressing at various restaurants. She also had worked at collection agencies. During this time, Kelly was grappling with the loss of her mother to brain cancer in 1990. “She had been ill for several years,” remembers Kelly.

Kelly had seen an ad in the local newspaper for a doggie daycare attendant. “I had wondered, what is this?” she smiles. “So the next morning I drove out to the daycare facility and they hired me on the spot.” Kelly was a natural. She immersed herself in all the training possible. “I learned so much about dog communication and behavior,” recalls Kelly. She also received training from PetSmart per her employer’s urging. Kelly was so impressed with the training requirements at PetSmart she ended up staying on full time. She had also witnessed an incident where a dog had not been medically treated properly at the doggie daycare facility, which cemented her reasons for leaving.

Kelly and her then-husband decided to make a move down to North Carolina  She had applied for a dog training position at PetSmart. Ultimately, Kelly realized that to best serve the dog and human community, she would need to begin her own business. She had a call to serve the homeless pet population, train dogs and utilize therapy dogs. “I had left my position at PetSmart because my boss had been terrible to me for eight months,” recalls Kelly. “I had 65 students wait for me to start my own business. It meant everything.” One of her students even helped invest in Elite Canine with her to get it going. “It was really encouraging. It truly was a grand opening.”

Kelly is now successfully running Elite Canine, which serves the community by offering classes to pups that need training. Whether it’s teaching them basic manners or advanced commands, she is eager to teach people how to have well-behaved animals. She also doesn’t forget about the importance of giving back. Many rescue groups rely on her expertise and talents to help them with their dogs.

Kelly knows the importance of having animals with people. That is why she started a therapy team to go into situations where humans need that unconditional love. Currently they have nine dogs on the team. There are seven more in training to get certified with their owners.

Our neighbor is much like Maya Angelou aspired, “My mission is not merely to survive but to thrive; and to do so with some passion, some compassion, some humor, and some style.”