Counselor Vicki Carr has changed many lives in her career 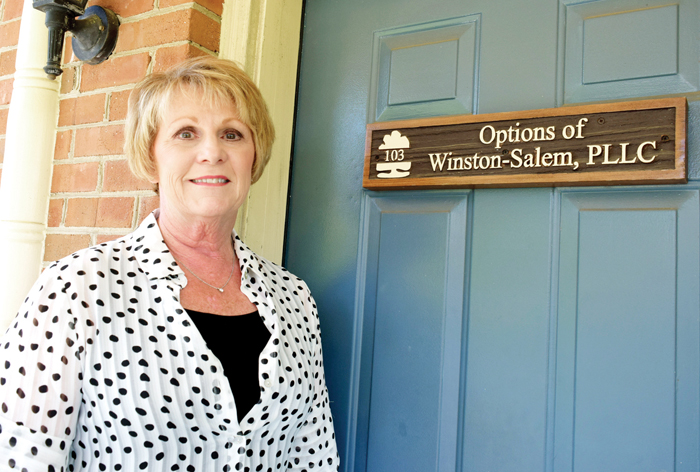 For 20 years, Lewisville resident Vicki Carr has helped people manage the hardships and struggles of life — from dealing with marital issues, to family conflicts and depression, and in doing so has touched the lives of literally hundreds of people in the community.

Now, it’s time for a new chapter in her life.

Carr, who graduated from Salem College and then earned her master’s in counseling from UNC Greensboro, always loved working with people. “I didn’t plan on a career in counseling, but I was always interested in people, helping them find solutions to problems.”

Carr grew up in Kansas and earned an associate’s degree in business administration from Wichita State. She married and then moved to Atlanta with her husband before moving the family to Winston-Salem. Once here she decided to finish her degree work.

“I earned my undergraduate degree from Salem and then enrolled at UNC Greensboro for graduate work. As part of my master’s program, I did an internship at Family Services in Winston-Salem and that’s where I met and worked with Jacque Gellman, a licensed clinical social worker,” Carr explained. “We talked about it and decided when I finished my master’s we would open a practice together.”

That was 20 years ago, and today Options of Winston-Salem is a thriving business. “We opened in 1999 and slowly began to grow our client base,” Carr said. Gellman retired several years ago.

During those 20 years, the partners changed offices several times as the client list grew, as well as the staff.

Carr said there would be no way to know exactly how many people she’s worked with, but it’s been in the hundreds, and the practice as a whole, has helped literally thousands in the area. She said, ‘The experience has been both a challenging one and a rewarding one. “

While she’s worked with people with a variety of issues, her special interest has been marital counseling. “I really enjoy couples work, although I do a lot of work with individual adults as well.”

Carr said that while it can be challenging to listen to people in crisis throughout the day, she has always thought of her role as an “open hands” one. “I listen and guide my clients through the process of dealing with their issues, but these aren’t my stories. I have to remember that I’m there to help them through their own journey, to be better equipped to find their own answers, but I can’t bring those issues into my own life. I have my own story.”

One of the positives Carr has observed over the years is that the stigma of mental health issues has changed and people are more comfortable seeking help. “I think that change has been going on for some time now, and that’s a good thing. What does concern me, however, is that the issues that people are dealing with are often more serious. This acuteness of the problems is definitely more intense. That’s why it’s a good thing people are often more likely to seek counseling than would have been the case years ago.”

One of the issues Carr mentioned was bullying and the impacts of social media. “My daughter is also a counselor and works with children and families, and this is a big issue.”

When asked about why she has decided to retire now, Carr said her husband plans to retire within a few years and she didn’t want them both to be going through that process at the same time. “It will be an adjustment, but I’m looking forward to it.”

Carr said coming to the end of her business career as been bittersweet. “I’ve spent a lot of time with clients working toward closure. For some, we’ve finished their journey and others will be continuing without me, but I hope I’ve been able to make a difference for all of my clients. That’s always been my goal.”