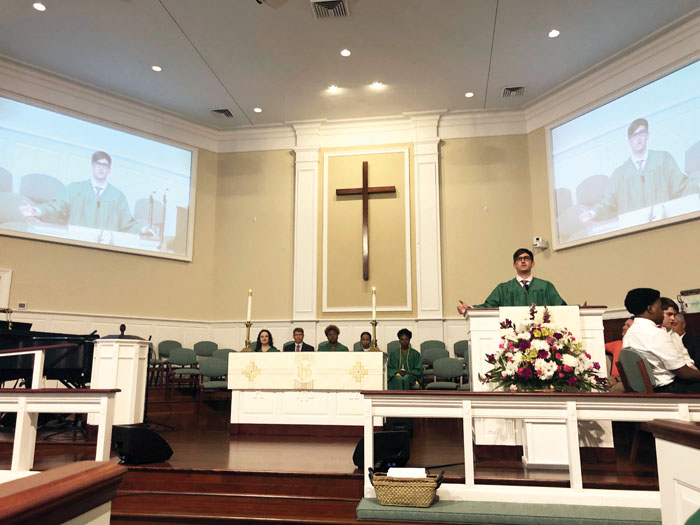 By Sarah Lindsay
For the Clemmons Courier

As keynote speaker Jeff Thompson described it, a baccalaureate service is a non-denominational, spiritual “farewell ceremony for graduating seniors and their families,” but for the roughly 40 graduating seniors in attendance, West’s baccalaureate meant much more to them than just some simple ceremony. A student-led event, the service took place at Clemmons United Methodist Church at 7 p.m. on Sunday, June 2, where seniors arrived in their classic, Titan green gowns, buzzing with excitement.

The graduates entered the sanctuary in single file, candles in hand, waving to the room full of family and friends alike, as a student brass ensemble comprised of underclassmen played the classic “Pomp and Circumstance” of graduation processionals. While most of the green-clad students took their seats at the front of the room, six seniors lined the stage and prepared themselves to speak, being responsible for the service’s occurrence.

One such senior was student body President Pedro Villasmil, who delivered a speech entitled “Perseverance,” in which he recounted the many struggles he faced immigrating to the United States from Venezuela and how he was able to overcome them with the help of his teachers and friends.

“It was great to be able to share my story with my peers. I’ve been incredibly reflective lately about my time at West and how much I’m going to miss it. The service was a great opportunity to reflect with fellow students and celebrate this moment in our lives,” Villasmil said.

While some speakers chose to look back upon their time at West, others confronted the future and its unpredictability. In senior Sarah Frisbie’s case, she shared words of encouragement with her fellow graduates, urging them to keep the faith and find comfort in God as they moved onto the next chapter of their lives.

Upon invitation of the students, Jeff Thompson was also given the opportunity to impart some wisdom on the class of 2019. Thompson is both a history teacher and the boys track and field coach at West, and he was the school’s Teacher of the Year in 2017; moreover, Thompson is retiring and will be moving to Maryland to pursue another teaching job following the conclusion of the 2019 school year, so he was able to relate to the graduates as he, too, is facing a great deal of change.

“In your excitement to turn the next page and start your new beginning as a young adult … take a moment to pause and reflect upon the virtues that have been instilled in you to be a light upon the world,” Thompson told the graduates seated before him.

The ceremony concluded with the lighting of the graduates’ candles as they exited the sanctuary, symbolizing the way in which they will “carry (their) light into the world.” West Forsyth’s graduation will take place at the Lawrence Joel Memorial Coliseum at 2 p.m., Saturday, June 8; admission is free. Feel free to come out and support the approximately 600 seniors as they begin the next chapter of their lives!