Your Neighbor: In practice: Dr. Aaron Thompson has dedication for patients, family 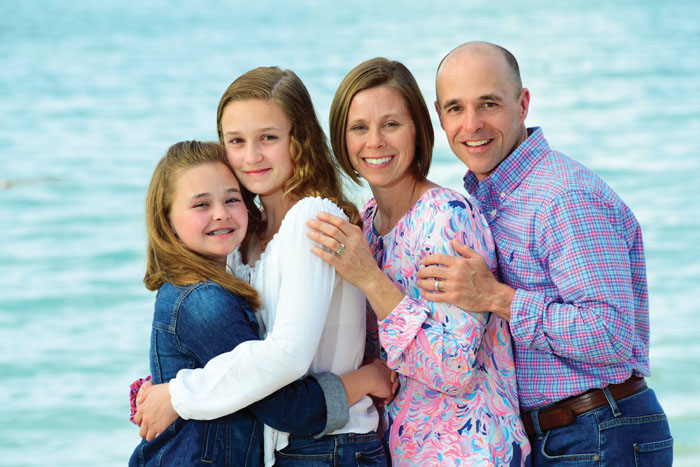 Aaron Thompson grew up with a plan. Hailing from Bristol, Virginia, Thompson was the oldest brother in his family. His motivation to become a doctor was ignited in high school by a local general surgeon. “The girl I was seeing back then, her father took me under his wing. If your grades were good enough, you were able to shadow someone professionally,” mentions Thompson. “I couldn’t get enough. Especially combined with my chemistry teacher who had a slant towards biochemistry. I liked understanding the why, not necessarily to the physics level, though.”

Thompson also learned early in his life that he had a real love for tennis and played competitively. “I came from a small town and both my parents worked. Playing in the United States Tennis Association (USTA) tournaments were a way for me to get out and do stuff.” Thompson continued to play tennis as he applied to colleges in Virginia. “I knew I needed to go in-state. The University of Virginia (UVA) in Charlottesville was a good fit with what I wanted to do,” describes Thompson. When it came time to apply for medical school, Thompson chose to do so at UVA again. “I had spent a lot of time studying in college so I could achieve my goal. When I found out that I had gotten into medical school, it was a huge weight lifted off my shoulders. It had been a cutthroat process and I was excited to be there. I remember as soon as I found out, I immediately told my parents,” recalls Thompson.

During Thompson’s third year as a medical student he was working on one of his rotations at a local physician’s office. “A drug representative came into the office and started talking to me, thinking I was the doctor who made decisions. I definitely wasn’t. I was just a med student. Unbeknownst to me, one of the nurses chased this woman down and asked if she might be interested in going on a date with me. She said she was, and when the nurses told me what they had done I was really excited. I took the card with my future wife Ali’s number on it. I didn’t play it cool. I called her that night. We hit it off from the bat,” fondly remembers Thompson. “One of those nurses even went to our wedding. It truly was serendipitous because Ali was moving that next day and would never have been back at the office.”

Thompson and his new wife ended up packing their bags and belongings for Winston-Salem in 2001. Aaron and Ali had gotten the news on “Match Day” that they were N.C. bound. Match Day is a term widely used in the medical community when the National Resident Matching Program releases the results to the applicants seeking residency and fellowship training.

During Thompson’s residency he appreciated the obstetrical and gynecological training he received. In 2005, Thompson joined Hawthorne OB-GYN Associates, a private practice of doctors that had been in business for more than 25 years. “I love that you get to see patients in all stages of life. You see women that are healthy, having babies, trying to have babies, and you can fix things. I like the procedural aspect and the clinic time. You’re not managing chronic problems. You can get over the hump of the problem,” notes Thompson. Thompson also enjoys the aspect of really knowing his patients. “Most of my patients I don’t even have to look at their charts. I remember their history. You just have that kind of connection. That’s important to me and I think it’s important to them.” When Thompson started he was the new kid on the block. Now Thompson is one of the senior managing partners in the practice as the three founding doctors are close to their retirement years. “We are also moving shortly to a new space right where Jonestown dead ends to Country Club,” informs Thompson. “It allows us to have more updated space and provide growth. These folks are like extended family to me. I really enjoy the people that I get to work with; we are together 8-10 hour days during the week. I also joke that it’s my second marriage.”

Thompson spends his spare time with his family. Daughters Gabby and Caroline are also very active like both of their parents. Thompson still loves tennis and now shares it with his children. “When we’re not going to the girls’ swim meets and horseback riding practices, we like to stay active in other ways. I actually keep bees. We have 17 chickens, and we are growing a miniature apple orchard,” says Thompson. He also loves to be on the water skiing. “I had contemplated moving to Anderson, S.C., because I love it so much when we first picked where we would raise our family. Whether it’s salt or fresh water, it brings comfort and relaxation.” However, the Thompson family agrees, they are exactly where they need to be right now.

And much like Arthur Ashe noted, “From what we get, we can make a living; what we give, however, makes a life.” Our neighbor has proven this with his dedication to his patients and family.