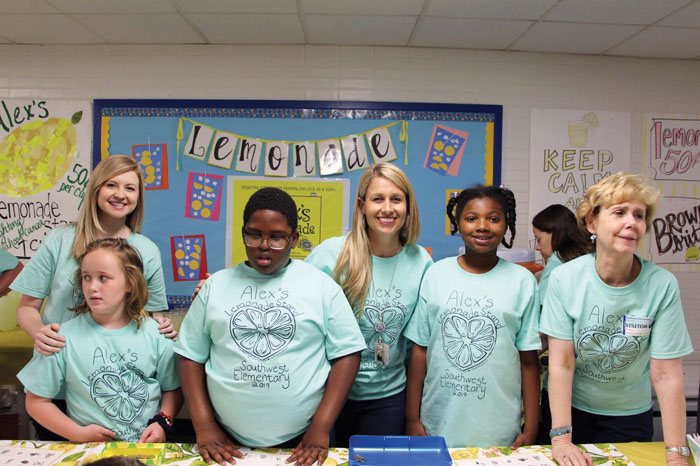 And, for him, what makes her a good mother?

It was Tuesday, June 4 — the day of the eighth-annual fundraiser that Vernon, a speech/language pathologist at Southwest, has organized to raise money for the Alex’s Lemonade Stand Foundation, which supports the fight against childhood cancer.

Over the years, it has grown into quite an event.

Parents such as Jessica Webb, who is a nurse at Brenner Children’s Hospital, take a day off from work so they can come in and help out.

“I think it’s a great cause,” Webb said. “It takes a lot of work. She (Vernon) pulls it off every year.”

Other parents and grandparents — along with members of the wider community — come in to buy lemonade and Brownie Brittle, to bid on items in the silent auction, and, perhaps, buy a custom-designed T-shirt.

Even though lemonade officially costs only 50 cents a cup and the Brownie Brittle costs only $1 a bag, an adult might hand a $5 bill to the student taking money and say, “Keep the change.”

The exceptional children students serving and making change were in the Pre-K, Readiness, Core I and Core II programs. Along with raising money to fight childhood cancer, the day offers the opportunity for students to become more comfortable with social interactions.

“It allows them to be leaders in school for this day.”

Hall was there helping with T-shirt sales. Nearby was Emma Hatfield-Sidden, who also works with EC Assistive Technology, and Annsley Munnelly, a speech/language pathologist.

It’s Munnelly’s first year at Southwest — she used to work at Walkertown Elementary — and she was impressed by the event.

A group of students in the OCS (Occupational Course of Study) at nearby West Forsyth came over with their teachers. A number of them had participated in Alex’s Lemonade Stand when they were students at Southwest, Vernon said.

They had collected $50 to give to the cause and presented the check to Vernon when they arrived.

Some supporters aren’t directly connected the Southwest. Celia Poindexter, who runs the Kimono Japanese Restaurant in Clemmons, came with her son, Adryan, who is 3, to support the cause.

The degree of community support is remarkable. Along with companies donating the lemonade and Brownie Brittle, businesses supported the event in other ways, including donating items for the silent auction.

When Leigh Anne Robinson, the parent and former PTA president who helps Vernon organize that aspect of the day counted, she found that the silent auction had 122 items. Items in this year’s silent auction included tickets to college football and basketball games. Someone who needed tickets to the Wake Forest/Duke game could bid on those.

Vernon gave Robinson credit for making that aspect of the day work, and Robinson said most of the credit should go to Vernon.

“Maria works on it a lot,” she said. “We’re working in next year’s right now.”

Robinson said she is happy to help.

“I love my kids’ school,” she said. “Southwest has an amazing history of leadership.”

Her daughter, Lillie, went to Southwest before heading off the middle school. Her sons Elliot (fifth grade), Oliver (second grade) and Sebastian (kindergarten) are still at Southwest.

Robinson also likes being able to support such a great cause.

“I love that we are giving to childhood cancer research,” she said.

As a seven-year survivor of lymphoma — a cancer of the lymph system — she knows about dealing with cancer personally. At the same time, she said, “It’s nothing compared to what I imagine it would be like to have your child sick.”

Other donations included a giant — and festive — yard sign created by the Mocksville company Card My Yard that had been set up in front of the school a few days earlier to let people driving up know about the lemonade stand.

Asked to stand behind the sign for a photo, volunteers Curtis Olford and Randy Dickerson readily agreed. Olford is the school’s lead custodian, and Randy Dickerson is a chef at Wake Forest University who had come over to support his daughter, Syriah Dickerson, who is in the fifth grade.

Asked whether he had a specialty as a chef, Dickerson said, “Whatever you give me, I will make it.”

Back inside, fifth-graders Savannah Hunt, Gracyn Wilkins, Will Koonin and fourth-grader Joshua Pegram were ready to serve customers wanting to buy Brownie Brittle.

Asked whether they have a favorite food, Savannah said “strawberries” — Gracyn said “brownies” — and Will said “spaghetti and meatballs.” Joshua doesn’t really have a favorite food but school counselor Katie Cunningham, who was standing by the students, certainly does — “lasagna.”

The volunteers included students who go to other schools. Lori Allen, the EC case manager at Southwest, had invited her son, Donovan, who is completing his last year at Meadowlark Elementary, to help. Also helping were her daughters, Darbie and Jackie, who are both in college.

Vernon’s mother, Elaine Poindexter, had baked goodies and set up a break room where volunteers could get refreshments.

As she does every year, Tracy Krell of Tracy Krell Photography was on hand to photograph all of the fun.

By the end of the day, the event had raised more than $10,500 to support Alex’s Lemonade Stand Foundation.