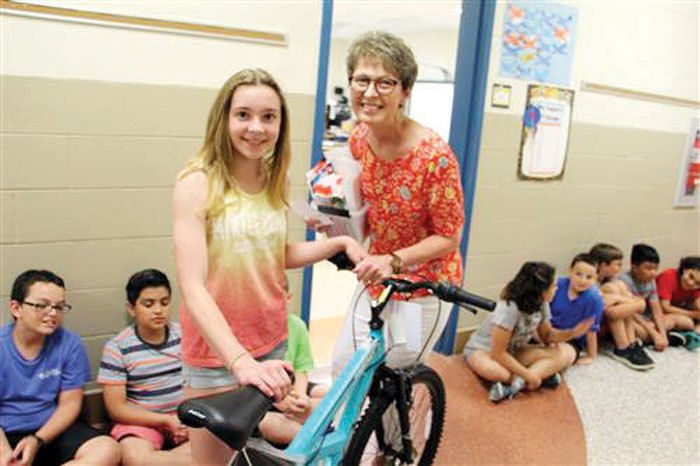 “I like the images in your mind you can see,” Payton said.

On Monday, June 3, Payton’s love of reading brought a brand-new bicycle into her life.

As a way to encourage reading at Morgan Elementary, the members of the Clemmons and West Bend Masonic Lodges sponsored the Bike for Books program. Completing a reading-related project made the students in kindergarten through fifth grade eligible to receive a bicycle.

Students in each grade chose books from a particular genre. To complete the project, students had options that included writing a summary of the book, writing a letter to a character in the book, and creating a new cover for the book.

On Monday, members of both lodges came to Morgan to join Principal Ramona Warren and Media Coordinator Lisa England in visiting the students in each grade to announce who won and giving him or her a bike.

“The members of our lodge take a great deal of joy in knowing we are helping kids with reading in some small way,” said Anthony Papineau, a member of the Clemmons lodge.

Payton wrote a report about the book “Wonder.” Payton said she enjoyed the project.

Although she already had a bike, she was glad to get a new one because her old one was getting small.

“This one is better,” she said.

A new bike for Payton is going to work out well for her younger sister, Sydney, who is in the third grade. Payton plans to give her old bike to Sydney.

The winner in the first grade was Sophia Bersch. She, too, plans to give her old bike to her younger sister. Adley is 3.

“It gives you energy,” she said.

Students could create as many entries as they wanted. Ava Ryan, who is in kindergarten, created the most — nine.

Her work was recognized with a special recognition. She received what England called “The Green Machine” — a low-riding, three-wheeler that England had test-ridden before delivering it.

Dayenn Arellano is the Second Secretary for Morgan. She came along on the adventure to take pictures. She received a delightful surprise when she learned that her daughter, whose name is also Dayenin, was the second-grade winner.

“I’m very excited,” Arellano said. “She worked very hard on her reading. We both did. The program was a great encouragement for her.”

Earlier, while waiting for everyone to arrive, Data Manager Vickie Haga talked about learning to ride a bike. She found it hard to learn with her father standing right there offering all sorts of advice. So she would wait until after he left for work so she could concentrate better.

“I had to wait for my daddy to go to work to learn how to ride it,” she said.

Once she did, she really enjoyed it.

“I really loved my bike,” she said.

She doesn’t ride as much as she once did but still enjoys it when she does and spending time outdoors in general, which she gets to do as a Cub Scout leader.

“I think it keeps us young,” Haga said.

The students in each grade who received a bike were:

The lodge members present were: