‘Everybody likes and respects the guy’: After 30 years, Coach Thompson set to retire 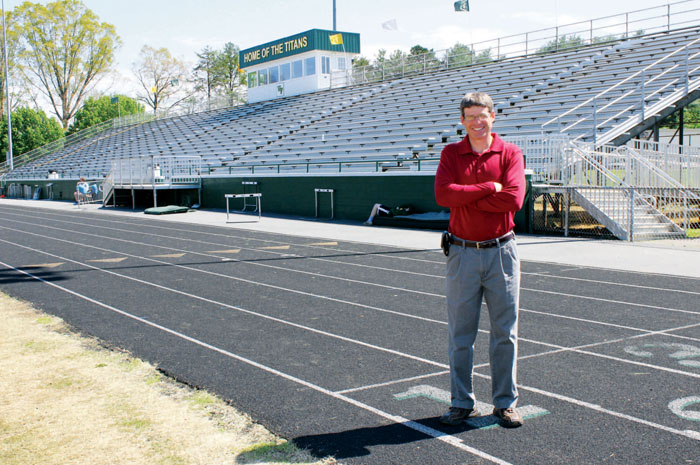 Jeff Thompson’s impact at West Forsyth may be impossible to effectively measure.

Thompson, a social studies teacher and coach for 30 years for the Titans, has decided to trade in his green and gold for the ocean blue of the Maryland shore and will retire from West at the end of the school year.

Thompson found his stride as the boy’s cross country and indoor and outdoor track coach since 2002, but he has been coaching at West in some capacity since his second year of teaching. This include stints as the boy’s golf coach, assistant football coach and the swimming coach.

He led the Titans the first state championship in school history after guiding the girls cross country team to the title in 1994, then added another after leading the boys track team to a state title in 2017, when he was also recognized as the school’s Teacher of the Year. Along the way, there have been numerous individual state champions in track and in swimming, and countless conference and regional championship trophies.

“I’m just lucky, maybe a little fortuitous,” Thompson said. “There have been a lot of people along the way who contributed to the success of those programs. Great assistant coaches. Great parental support. My grandfather was fond of saying ‘surround yourself with great people, and great things happen.’ Well, that’s how I see it. It’s been one heck of a special ride.”

Thompson and his wife, Becky, who teaches in the Hospital Homebound program, have both accepted positions with the Dorchester County Schools in Maryland. As for coaching, Thompson will leave that option open.

“That’s in my back pocket but there is no defined role at the moment,” he said. “And I think I’d like it to stay that way, at least in the first year.”

He grew up in Rockville, Maryland, so he will be heading back to familiar territory.

“I thought I was going to get a teaching job in Maryland when I graduated from college,” Thompson said. “When I didn’t, I came back to North Carolina and talked to one of my professors at Catawba and she made two calls. One was to Winston-Salem, and the next day, I was interviewing at West Forsyth with Jerry Peoples, who was the principal at the time.”

The interview happened on a Thursday. School was set to begin the following Monday.

“And it’s been non-stop ever since,” Thompson said with a laugh. “West Forsyth is a great place. It’s a lot more than just the buildings. It’s definitely about the people. And I’ve had the good fortune to be involved with a lot of great ones since I’ve been here. From the faculty, to the administration, the kids I’ve coaches and their parents.”

Mike Pennington, who took over as the athletic director five years ago, said that he never had to worry about Thompson’s programs.

“The word I think that best describes Jeff is professionalism,” Pennington said. “He is always going to do what he is supposed to do, which is to do the right thing for the kids. My son (Matthew) had him in class and loved him. I taught from him two doors down the first few years I was here. Between the boys’ and girls’ teams, he’s probably dealing with 80 kids every season. In terms of numbers, our running program is probably our biggest sport other than football. And he was doing that for three seasons every year. He’s reliable. He’s trustworthy and just and excellent coach. And he’s been really good at it for a long time.”

Durwood Pack was the athletic director at West when Thompson was hired in 1989. Pack, who retired in 2007, was also a social studies teacher who worked with Thompson in the classroom as well as in the athletic arena.

“He won the first state championship in school history with the girls cross country team in 1994 and then we fired him,” Pack said with a laugh. “Well, we actually moved him over to the boy’s team because he would do anything we asked him and he would do it well. You never had to worry about him because you knew Jeff was going to do things the right way. When I found out he had been working as a lifeguard during the summer months early in his career, I thought ‘hey, I bet he can also coach swimming for us.’ So, that’s kind of how that got started.”

Thompson gave up coaching swimming in 2002 when he helped start the indoor track program. The swim team won their first conference title in 1993 and ended up winning eight straight.

“That’s a really special memory for me because of the difficulties we had just scheduling pool time in the area and beating some of the competition we did,” Thompson said. “I mean Grimsley, which was in our conference then, had their own pool and had some really talented swimmers every year.”

He started coaching cross county in 1990 under the tutelage of Louis Newton, another longtime coach at West who Thompson credits with bringing him along.

“Louis is a really important piece of the puzzle for me, a really important person to me personally and professionally,” Thompson said. “He taught me through his example of how to do what was right for the kids. He was the embodiment of a great teacher and great coach.”

There was also the “bicycle incident” which involved Newton, that Thompson and some of his peers still recall with laughter.

“Every Thursday, we would take the team to Tanglewood for practice on an activity bus,” Thompson said. “And Louis, who was an avid cyclist, would always drive his truck over and have his bike I the back. Well, I would run with the team and he would follow along on his bike. After one practice, he and I were talking when a team member got on the bus to get her bag because her parents were going to pick her up there. Louis had kind of leaned his bike against the bus in a place where I couldn’t see it. As we said our goodbyes, I started to pull off in the bus and made a left turn. Then I felt a bump and I saw the kids jaws just drop, realizing what happened. I ran over his bike. And it was a really nice bike. I think that moment will like on in West Forsyth infamy.”

Richards recalled the moment Thompson came to inform him about the accident.

“It was a really expensive bike,” Richards said with a laugh. “Fortunately, we had some great insurance and replaced it. But Jeff came in and told us there was an accident. And we were going ‘is everyone OK? Did anyone get hurt?’ And he told us he ran over Louis’ bike and kind of laughed about it. It might be the only time he messed up in his whole career. He is one of the good ones. You wish every coach you hired was like Jeff Thompson.”

Nathan Newsome has been working together with Thompson for the last 14 years. Newsome coaches the girl’s cross country and track teams.

“The stroke of luck of having Jeff as the person who was with me year-round all these years really developed into him being my best friend,” Newsome said. “It’s hard to use the word mentor when you are talking about one of your closest friends, but that’s what it is with Jeff. He’s really like a brother. There are a lot of experiences I would not have had had our paths not crossed. I’m still trying to find the person who points at him and says, ‘I can’t stand that jerk.’ I can’t tell you how many times he has purchased meals for some of the athletes. Everybody likes and respects the guy. I can’t think of another coach here who has won two state championships in different sports and been named the Teacher of the Year. It will be a huge hole to fill.”

Newsome and Thompson ran their first of six marathons — Tobacco Road in Cary — together several years ago. When Newsome felt a twitch in his calf muscle during the race, it was Thompson who stayed back with him instead of moving forward at his own pace.

“I was running with my toes pointed up because if I pushed off on them, I knew my calves would have just locked up,” Newsome said. “I urged him to keep going, but he hung back with me. He told me ‘we trained for this together and we will run it together.’ That’s just the kind of person he is.”

Newsome also enjoys ribbing Thompson when it is warranted. And he enjoys the reciprocation.

“It can be brutal, just like with brothers,” Newsome said. “The man loves to fish. He has more gear than anyone I know. Some of it, I don’t even know what it’s for. And we were fishing one time at a lake in my neighborhood and he got his line caught in a tree. He stood up in the boat — you can see where this is going — and lost his balance and fell in. Now, the water was maybe only five feet deep, but he went completely under. I wasn’t worried about him because I knew he could stand up. But when he came up, he didn’t have his glasses on. And he’s blind as a bat without them. And his phone fell out. And his wallet. He was feeling around at his feet for everything and eventually found them all, and his phone even worked after being completely submerged. So, even when it looks like catastrophe strikes, things always seem to work out for Jeff Thompson.”

Andrew Kibler, a two-time all-conference discus thrower for Thompson, also had him as a teacher.

“He was one of my favorite teachers,” Kibler said. “He is the kind of person who remembers everyone’s name and even remembers where you sat in his room when he was your teacher. When he found out we had some cheap plastic discs one year, he went out and made sure we got some quality ones to use instead. As he saw us getting better, he wanted to be sure we had the best equipment.”

Patrick Cromwell, who coaches cross country and track at Mount Tabor, has competed against Thompson’s teams and has worked with him in organizing local meets.

“You always love to see West Forsyth at your meets because you know they will be quality competition and you know Jeff Thompson will be willing to help out with anything,” Cromwell said. “He was certainly a mentor to me when I started as someone with no experience in seeing the way he carried himself. I call him my ‘middle-aged idol’ because the man is tireless. He is absolutely someone I would want my kids to have in the classroom or coaching them. Someone puts in that kind of time, how many kids has he impacted? You’re talking in the thousands, easily. How many kids and families has he influenced in a positive way? That’s quite an impact. That’s quite a legacy to leave. You can replace the position. You can’t replace the person.”

Thompson will take all his memories with him later this summer when he and his wife head north.

“I actually met my wife at West too, so that’s something I will also look back on fondly,” Thompson said. “She was a student teacher my first year here in ’89. She would always ask me if I ever wanted to move back home when we went to visit. My parents are still there. My sisters are there. There’s a lot of water up there. I see a lot of fishing and boating in my future.”